The smartphone-controlled device is one of the most advanced consumer drones yet, and it shows just how sophisticated the consumer drone market is becoming thanks to improving civilian technology and our obsession with high-tech civilian gadgets that were once the stuff of science fiction. It’s another remarkable achievement from the Paris-based company that brought us the AR Drone a few years ago.

“We have built this after many years of R&D,” said Henri Seydoux, chief executive of Parrot, in a press briefing inside the old U.S. Mint building in San Francisco last week. “You can

With a special controller, you can fly the drone as far as two kilometers on an extended Wi-Fi signal. But while the hummingbird-like drone can take videos with a 180-degree field of view, the Bebop drone can only stay in the air for 12 minutes. After that, it runs out of batteries. It is also limited to flying within the range of an 802.11ac Wi-Fi network while under direct pilot control.

Still, the Bebop Drone is impressive. It makes a buzzing noise like a very loud bumble bee, but its quad rotors are made of a very light plastic. It is very safe, since the drone will cut off its motors immediately if one of the rotors strikes something, Seydoux said. It also comes with rubber shock absorbers that cushion vibrations and make sure the rotors won’t come into contact with a hard object.

“We worked very hard on the safety of the drone,” Seydoux said. “It’s smaller, lighter, and it won’t hurt you if you touch the propeller.” 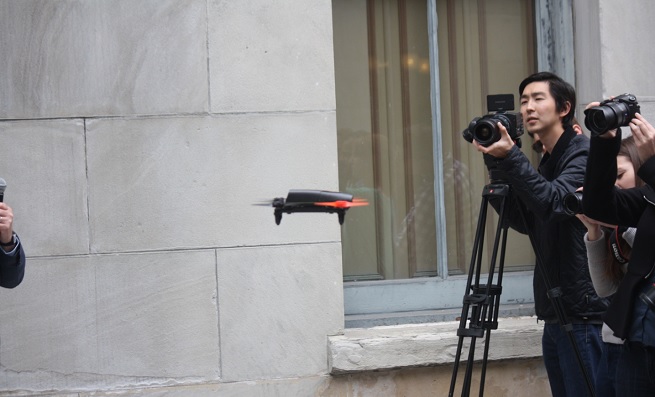 Above: Parrot Bebop with photographers

The camera takes high-definition video with a wide field of view and it automatically stabilizes the video image. It streams that video back to your iPad or Android tablet over a Wi-Fi network in real-time. The front-facing camera records in 1080p x 1920p resolution. It uses a 3-axis image stabilization system that maintains a fixed angle of view, regardless of whether the drone is hit by turbulence or pilot error. When you watch the video playback, it won’t make you seasick, Seydoux said.

“This is a flying camera,” Seydoux said. “You can use it to make movies.”

It took about 50 engineers to develop the digital signal processing, aeronautics, Wi-Fi radio, and industrial design. It weighs 380 grams without its hull and 400 grams with the hull. It can fly both indoors and outdoors.

The drone has a lot of sensors that help it achieve stability and maneuverability while under remote control from a pilot with a smartphone or tablet. The device has four ceramic antennae that can use 2.4-gigahertz or 5-gigahertz wireless signals, giving it a wide distance.

You can pilot the drone with a variety of cool options, including a controller that works with virtual reality goggles such as the Oculus Rift. Looking at the piloting app on your iPad, you can control the angle of the camera with your thumb. 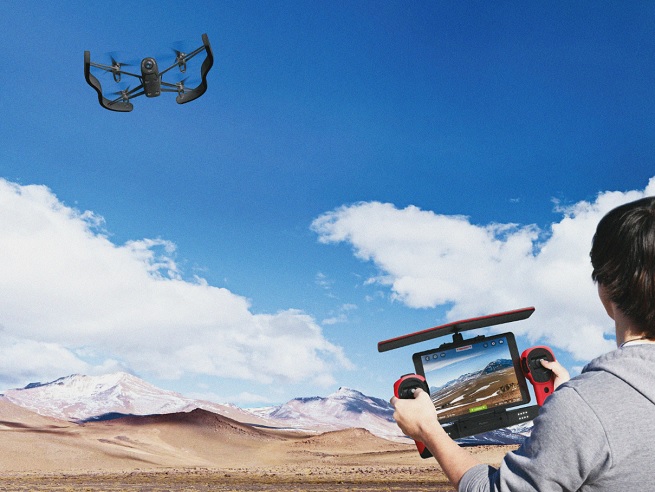 Above: Parrot Bebop with kid pilot

The gadget is indeed high-tech. The Bebop Drone has a Parrot P7 dual-core processor (an ARM-based CPU with a dual-core A9 process), a quad-core graphics processing unit, and a proprietary image signal processor. It stores images on an eight-gigabyte flash memory chip. After you land the drone, you can transfer the MP4 video and JPEG or DNG photos to your piloting device or a computer. It runs on Linux.

To give it stability, the quadricopter has a 3-axis accelerometer, a 3-axis gyroscope, and a 3-axis magnetometer. It has an ultrasound sensor with an 8-meter range, a a pressure sensor, and a vertical camera.

The device also makes use of location technology. It has a GNSS chip set that can receive signals from Global Positioning System, GLONASS, and Galileo satellites. Using that data, the drone can fly autonomously on a predefined flight path and return automatically to its take-off position. The drone automatically records its flight data on the Parrot cloud. 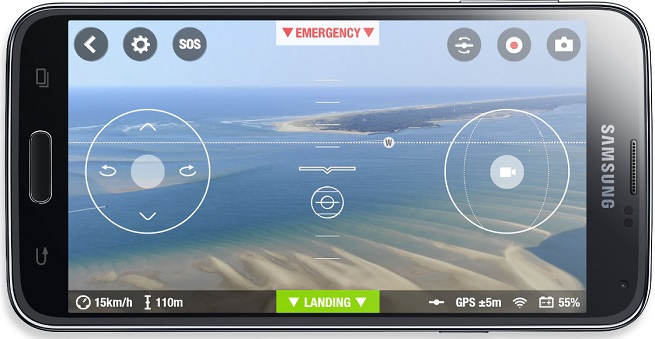 The drone comes with a free piloting app, FreeFlight 3.0, for iOS and Android. To fly, you simply press the “take-off” button. That makes the drone start its engines, take off, and hold position in mid-air while it awaits further instructions. The left thumb controls a virtual joystick that governs altitude, while the right stick controls the angle of title of the camera. When you tilt your smartphone or tablet, you can make the drone move forward, backward, left or right.

Before it takes off, you can create a flight plan for the drone to send it out on a predefined course. When you hit the “return home” button, the drone comes back to you.

Parrot will also provide a specialized controller, the Skycontroller, which can extend the range of the Wi-Fi network up to two kilometers. The Skycontroller has two real joysticks that can attach to the tablet for easier control. You can also connect the drone to first-person view glasses such as the Oculus Rift. It is much smaller than previous drones, with dimensions of 28 centimeters x 32 x 3.6 without the hull, and 38 x 33 x 3.6 with the hull. The Skycontroller uses Android 4.2.

The device will be available in the fourth quarter. pricing hasn’t been announced. 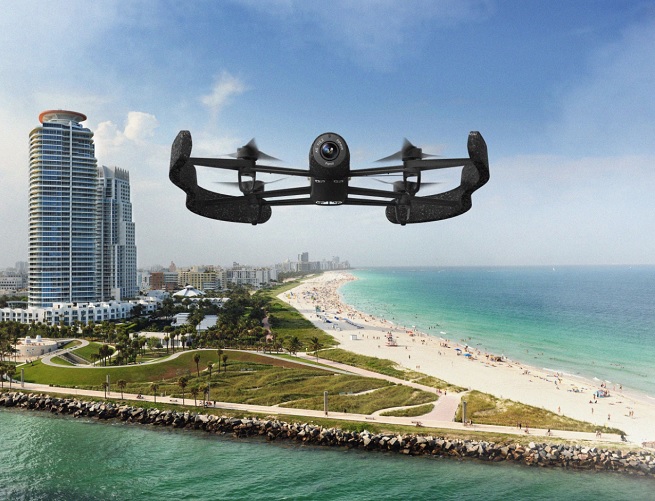 Above: Parrot Bebop at beach