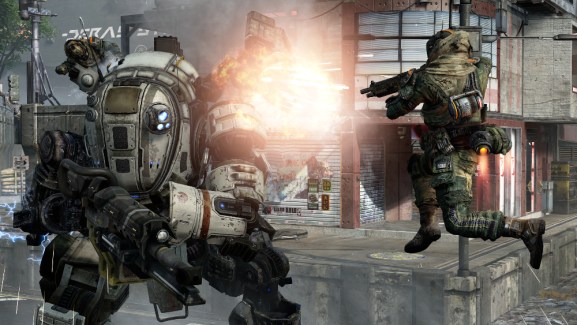 EA's Titanfall is a recent bright spot for the company.

Under the leadership of new chief executive officer Andrew Wilson, Electronic Arts is on a surge. This includes the company’s share price, which is at its highest point since 2008. That has a trio of the publisher’s top executives selling huge amounts of their vested shares to reap some of the reward.

On Friday, EA filed notices with the Securities and Exchange Commission to inform the organization that executive vice president Patrick Soderlund, general counsel Stephen Bene, and chief operating officer Peter Moore were selling off significant amounts of stock. Soderlund sold 36,133 shares for $1.2 million, Bene sold 7,771 for $259,555, and Moore cashed out 100,000 shares for $3.4 million. Soderlund and Bene both exhausted their stock, but Moore is still holding on to 108,681 shares.

This follows EA’s most-recent financial report, which it filed on Tuesday. The company earned 48 cents per share for its fiscal Q4, which crushed Wall Street estimates of 11 cents per share. In the next day of trading, the company jumped 21 percent from $28.05 to $33.95, and it’s continued to climb ever since.

Executives selling their shares in a company is pretty standard. Outsiders often take it as a sign that a company won’t continue to perform well, but that isn’t always the case. Often times, executives exercise their right to sell stock for personal financial reasons. The SEC puts heavy limits on when the top people inside a company can make stock moves like these, and it’s possible that Soderlund, Bene, and Moore simply wished to see a return on their work while they had the opportunity.

EA has a long history as one of gaming’s most-successful third-party publishers. After years dominating the industry, the company struggled for much of the later part of the last decade under former chief executive officer John Riccitiello. In March 2013, Riccitiello stepped down from the company and explained that he was taking responsibility for the company’s state at the time.

When Riccitiello left, the company had high costs, and it was trading at $18.71, which was down from $61.40 when Riccitiello first took over as CEO in 2007. Following his departure, EA’s board of directors started looking for a replacement while also laying off huge portions of the staff as well as enacting other cost-cutting measures.

These actions created a leaner, more agile company that former EA Sports chief Andrew Wilson inherited when he took over the CEO position in September.

One of the highlights of EA’s financial report last week was that it increased its revenues while keeping its spending flat. It accomplished that, in part, by moving all of its development to a pair of internally created game engines (one for sports products and one for all the rest), and the market has responded well to that strategy.

Since Soderlund, Bene, and Moore sold their shares, EA’s stock price has continued to rise. It ended trading today at $35.31, which is up 19 cents from its Friday close.