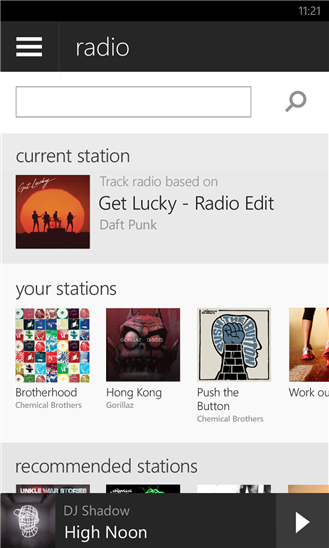 The update is now available on devices running Windows Phone 8 and above. According to reviews people have posted on the update page, the new version should answer complaints some people had about the limited functionality of Spotify’s app since it’s introduction in Nov. 2011.

In addition to changing the design to match the Android version, the update, first promised in February, brings subscribers three major functions previously missing on Windows Phone. Subscribers now have access to the Radio, Browse, and Discover tabs, allowing them to listen to personalized radio stations, search for trending music, and discover up and coming artists and songs.

There are currently no reviews of the newest version on Spotify’s Windows Phone Store page. However, The Verge’s Tom Warren reports that app appears to be “totally rewritten,” resulting in major performance improvements. He also writes that the new functions work as described and nearly brings the app on par with its iOS and Android counterparts.