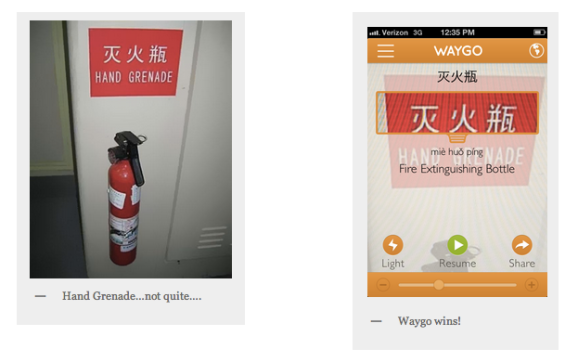 Waygo's translation appears to work better than many signs in China.

If you’ve moved to China without having an inkling of the Chinese language, Waygo’s CEO Ryan Rogowski and Waygo’s director of marketing, Ryan Shuken, know exactly how you feel.

“When I started living in Beijing, I was looking to learn Chinese and not being able to read the characters was very frustrating,” said Rogowski in an interview with Technode.

Rogowski’s experience in China inspired him to start Waygo — a visual translation app that allows users to wave their phone over Chinese or Japanese characters and receive an English translation immediately and in real time. The best part? An Internet or data connection isn’t required.

Waygo is primarily aimed at travelers in Asia, and works well with things like menus or signs, allowing users to obtain meaningful translations of food items instead of character-by-character translation that occurs in other translation apps, which often make little sense.

“We focus on what you would encounter as a tourist. From subways, to getting around, to understanding what’s on the menu. Things that we take for granted that are simple in our everyday life until we go abroad and can’t speak that language. It’s incredibly difficult,” said Shuken. “If we only had something that could help translate all of that very easily.. That’s what Waygo is.”

According to Rogowski and Shuken, the team is currently focused on Asian languages, primarily because of the pictorial characteristics of languages such as Chinese and Japanese. They plan on adding more Asian language pairings (Korean, for example) in the future, and are also looking to translate various Asian characters into English.

Some of you might be thinking: But there are already apps that do the same thing out there! Pleco has Optical Character Recognition, and Google Translate also allows me to snap a photo and translate text on the image!

To check if Waygo is ahead of its competition, Rogowski, Shuken and I did a side-by-side comparison of Google Translate’s OCR translation and Waygo. We attempted to translate a short Chinese menu, and in less than a second, Waygo had the translations displayed on the phone screen in real-time, while Google Translate was still scanning the photo taken of the menu, in order to detect text.

To prove yet again why Waygo is superior, another test was conducted, this time without an Internet connection. Waygo worked as per normal, while Google Translate prompted us that there was no Internet connection and thus was not able to complete the task. The ‘offline’ feature for Waygo will prove very useful to travellers (especially since data charges are usually expensive overseas) since the app can translate without a data connection.