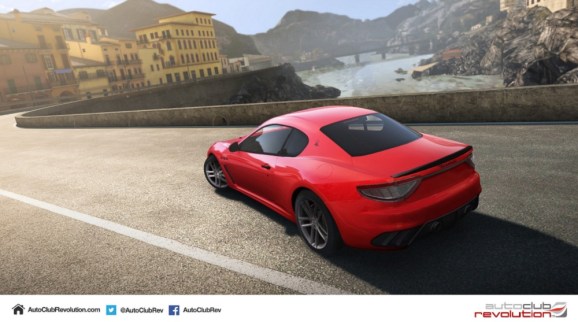 Eutechnyx is unveiling details of a new version of its popular free-to-play Auto Club Revolution. The U.K.-based gamemaker has re-engineered the racing game to be as visually engaging as a console game, and it has added support for the Oculus Rift virtual reality headset.

The company will launch version 2.0 of Auto Club Revolution on June 16 with a closed beta test from longtime members of its community.

In a showroom view of the cars, you will be able to use an Oculus Rift headset to view vehicles up close and from different angles while immersed inside a virtual 3D world. You can zoom in using the ZeroLight car visualization tool and see every inch of the car in fine detail in a 360-degree-view garage. I got a good look at the virtual reality viewer, and it has some stunning detail that you would swear came from a high-end PC version. And while I couldn’t drive around in virtual reality during my demo, Eutechnyx says VR gameplay will be included when the update hits in June.

Eutechnyx introduced its first Auto Club Revolution on the PC in 2012 as a free-to-play racing game.

“We’ve spent two years laying the foundation of an authentic community-driven game for fans of automotive culture. We have hundreds of thousands of players worldwide that motivate us to push the ACR experience even further, and now we are bringing the best ideas to fruition.” says Dave Thompson, development director of ACR, in a statement.

More than 50 car models from the likes of McLaren, BMW, Ford and Bentley will come to the virtual viewing so that you can see both interiors and exteriors in close detail. The 3D car models also have new audio and engine sounds that Eutechnyx says sound like the real thing.

Eutechnyx has overhauled everything in the game, not just the cars to but the physics, too. But it also plans to make the Auto Club accessible, as you only need to do one download to jump in and start interacting with the community.

“Our new single client is designed to make a bigger and better splash, pushing the quality of content and integrating new technologies that will further enhance player interaction. We have exciting times ahead of us and we can’t wait to share it with all our players. We strive to deliver content players want by providing a first-class, free-to-play online racing experience however possible,” said Thompson.

Eutechnyx has its headquarters in Gateshead, U.K., and it has game development studios in Chengdu (China) and Charlotte, N.C.