Apparently, the tech-industry brogrammer culture has no stranglehold on sexism, as Internet marketers routinely devalue women’s work by an average of 21 percent.

That’s according to search-marketing firm Wordstream, whose CEO Larry Kim just outed his customers’ biases. Kim compared how successful his female colleagues’ work is with how successful his clients perceive them to be. The result is a 21 percent gap between the great work women do and the not-so-great perceptions they suffer from.

This is, of course, the beauty of marketing tech: Everything is measurable.

Kim discovered this while digging deeper into some odd data uncovered during a routine quarterly review of his company’s performance.

“The mean satisfaction score across all reps, for this time slice and segment of clients, was 3.11,” he wrote in a blog post. “Almost all the men had scores above this group average, and all the women had scores below the group average. Further, the male client service rep with the lowest score still did better on the survey than the female client service rep with the higest score.” 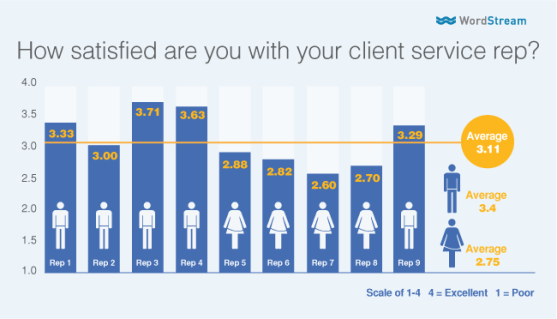 Shocked by this data, Kim — who is taking a week’s paternity break for a new child right now — dug deeper, wondering if it was conceivable that all of his female employees were less successful in managing search-marketing campaigns for clients. Suspecting gender bias, he used his company’s own Adwords Grader product to benchmark how each of his accounts was performing and then cross-referenced back to their account rep.

The result? Women are actually better than men at search marketing.

“The AdWords accounts supported by women at WordStream received Grader scores that were on average, 9 points higher than those managed by men,” Kim reports. “Female account reps received lower scores then male client service reps regardless of the customer’s level of achievement.”

The worst disparities were in average-performing accounts, where clients simultaneously gave male reps the highest scores and female reps the lowest.

You might just suspect this is the result of some aged dinosaurs still roaming this planet — aka male chauvinists. The truth is worse than that. In fact, it appears that it’s not just men who are sexist, but women are sexist against … other women.

“The gender bias was actually more dramatic among female clients, who scored female reps by an average of .82 points lower than they would male reps, compared to .43 lower score by male clients,” Kim says. 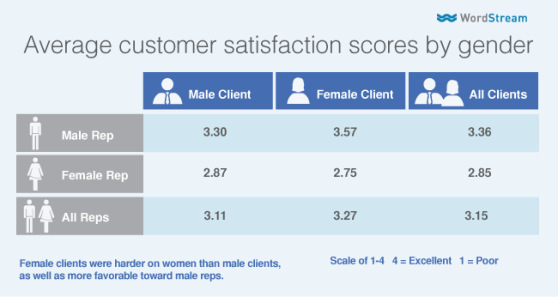 That evaluation gap contributes to a salary gap of about 20 percent industry-wide, according to recent data.

And it shows that even in the traditionally female-friendly marketing sector, women have a long way to go — even among themselves — to fight internalized sexism.

It also brings a new challenge to HR problems, Kim told me via email.

“Knowing that the bias is there, I can’t really use this customer satisfaction data to make data-driven decisions about hiring or promotions – and if I do, I have to factor in the 21 percent ‘Gender Valuation Handicap’ that we uncovered.”