Pocket Gems’ mobile game, Tap Paradise Cove (TPC), just had its second birthday last March. TPC, which is an island-themed simulation exploration game, has shown significant staying power over the last two years. Since launching in 2012 on iOS and Android, it’s remained a top-grossing game, with over 1.2 billion total play sessions. We’ve written before about some of the ways we’ve kept the game fun and engaging for our players. We’ve found that frequent content updates keep players interacting with the game for longer, increasing its total lifespan. One way we’ve done this in TPC is by creating new worlds for our players to unlock and explore. It’s based largely around exploring, crafting, and battling, so introducing new worlds made perfect sense for TPC.

VB studied mobile game monetization with 176 developers who have
1,100 published games and $600M in annual revenue.

Creating a new world in an existing game presents some unique challenges for a game developer. The world needs to be different enough that players will enjoy exploring it but similar enough so you don’t pull players out of the original experience. The worlds also need to have their own narratives. Our first world, Atlantis, is an underwater empire that draws heavily from Greek lore. Our second world, Asgard, is a sky kingdom influenced by Norse mythology. We just launched our final world last month, Montezuma, which was based on Mayan underworld myths.

Here’s some background on Montezuma’s narrative and how it shaped the game’s art.

Throughout all three worlds, players hunt the same antagonist, Fenrir, setting the stage for a final battle in Montezuma. When planning Montezuma, we were posed with a unique question: How do we give players an epic boss battle while embracing TPC’s strength as a positive and upbeat game? (For example, we defeat pirates in Paradise Cove, causing them to run away in fear. We never kill pirates in Paradise!)

We felt it would be more fitting for the final battle to end on a positive note. Consequently, we had to create a world that began as dangerous and evil and then transformed into good and positive. This started with the look of Fenrir.

In the first two worlds, Fenrir appears as an amorphous smoke monster, reminiscent of the monstrous wolf from Norse myth.

The below image shows the progression of Fenrir’s concept art. Originally, as the left picture below shows, we were going to have him be a monstrous wolf creature that players would vanquish. 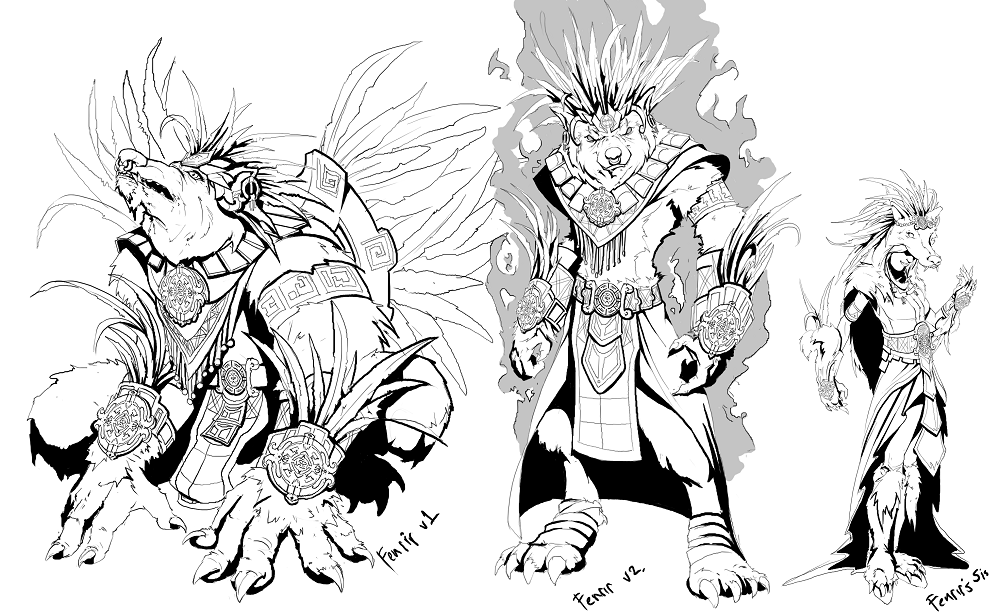 However, as the concept progressed, we felt it was important to make Fenrir less monster and more human. We sculpted the narrative so that Fenrir was actually a king who was transformed by magic into an uncontrollable beast. Players, instead of simply defeating him, return Fenrir to his human form by restoring a magical amulet.

The right image below shows where we landed for the pretransformed Fenrir-beast. It’s a little more humanlike than the initial concept. The left image below is how Fenrir looks after players help him revert to his human form. 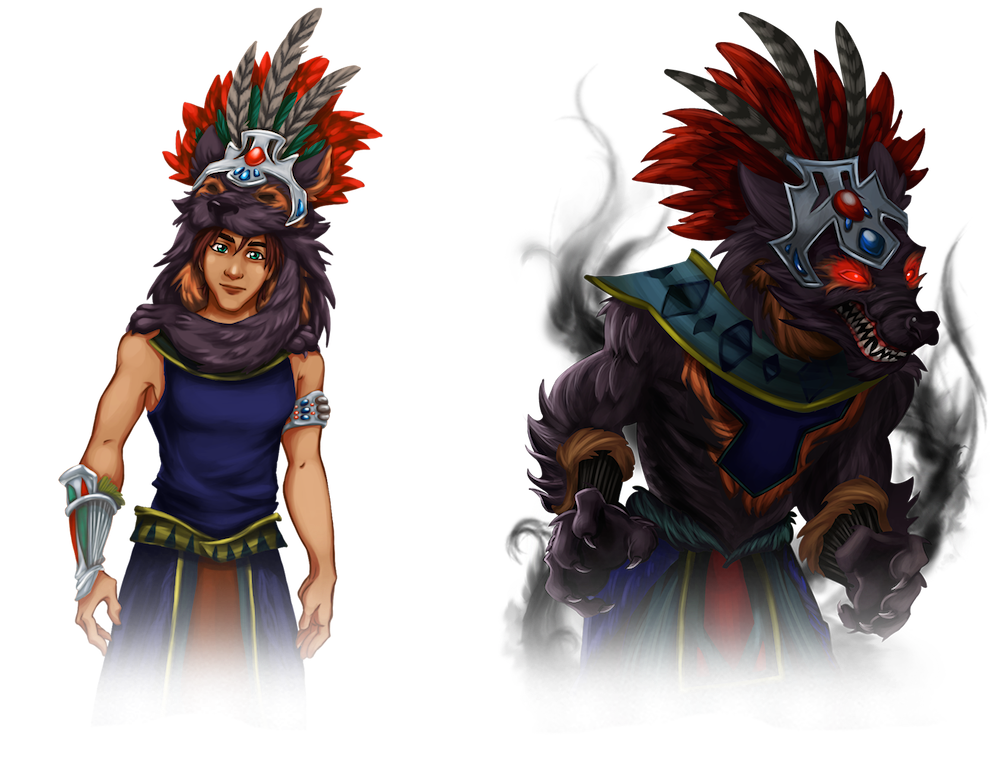 Kansah, the Queen of Hope

Another important part of Mayan mythology is the twin heroes, Hunahpu and Xbalanque. They represent a recurring theme in Mayan lore of balance and harmony. We thought it was important to tie that to Montezuma’s game narrative.

To give balance to Fenrir we created his sister, Kansah. 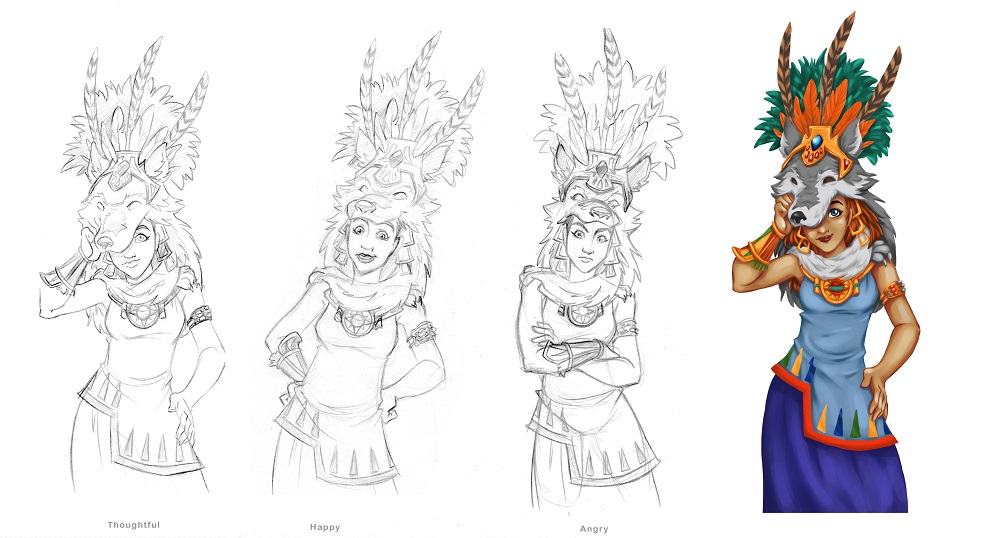 Above: Concept art for Kansah.

In our story, Fenrir and Kansah ruled over the underground city of Montezuma, the meeting place of the light and dark worlds. Harnessing the magic of their spirit animal, the wolf, Fenrir served as the King of Fear and Kansah as the Queen of Hope. Together, the twins brought balance to the worlds. However, Kansah believed if she destroyed Fenrir’s powerful amulet, this would eliminate fear and bring peace to the worlds.

This plan obviously backfires, turning Fenrir into a wolf monster that the players help restore.

As you can see in the above art, we felt it was important for Kansah to be both similar and opposite to her brother. She wears a similar head dress and garb, but these have a distinct color scheme. Where Fenrir’s look is dark and silver, Kansah is golden and lighter. This was a subtle and effective way to show balance of dark and light with game imagery. 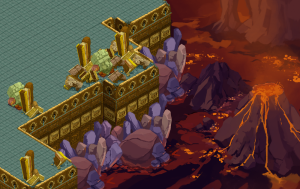 Above: The rubble of Montezuma.

In any good narrative, the backdrop can be as much of a part of the story as the characters. Mayan lore was a perfect starting point for our final showdown with Fenrir because if its rich underworld mythology of Xiblaba, or “the place of fear.” We had to walk a delicate line because we wanted to make Montezuma menacing while still matching the tone of TPC, which is lighter.

For Montezuma’s visual landscape, we balanced destruction and danger with bright colors and vibrant characters. This got players excited to discover new buildings and items that were visually unique while still giving a stylistic nod to the original TPC.

All of the buildings have the same feel as TPC’s standard structures but draw heavily on Mayan architectural styles. 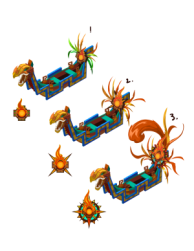 Above: The progression of ship designs.

Ships are also an integral part of TPC. We had a lot of fun finding ways to create ships that matched the feel of TPC while still drawing on Mayan influences.

Our core design team, including Erik Peterson, Kyle Wang, Iris Malang, Somer Loen, Kathleen Kralowec, and Cass Phillipps, worked hard to create Montezuma. In the end, we were able to strike a balance between giving Montezuma the darker tones of the Mayan underworld while keeping it light and fun. Creating Montezuma was a wonderful way to infuse new players into a game that’s been around for over two years. Montezuma also treated our existing fanbase to a fun new universe to interact with.

Amy Claussen is a game designer and writer based in the Bay Area. She serves as the Content Designer on Pocket Gems’ hit mobile game, Tap Paradise Cove. When away from the computer screen, she is also an accomplished playwright and theatre director. She holds her degree from Carnegie Mellon. She blogs here.