I’ve used Nuzzel heavily for over a month, and the best way I can describe the service is as a more complete version of Twitter’s trending feature — you know, if that feature was actually useful and pointed me to the news all my friends were talking about over the last 24 hours.

Nuzzel aggregates news based on who is sharing links on Twitter and Facebook, and it does a pretty good job of letting you know what the most talked about articles were for the day. Its biggest setback until now was that it didn’t have a mobile presence. 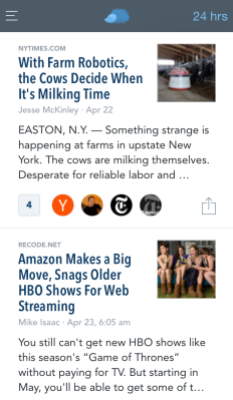 But Nuzzel feels like it was made to be used on a mobile device. The new mobile app, much like the web version, opens up with a collection of links to the most popular articles via your social networks over the last 24 hour. However, tapping the “24 hrs” button at the top right corner of the screen will let you toggle to popular stories from the last 8, 4, 2, or 1 hour(s). You can also have the app aggregate stories based on the number of friends that shared a link. The menu screen also lets you take advantage of other aggregated news feeds, including featured feeds from notable people in the public eye.

I’d expect usage to increase pretty rapidly now that there’s a mobile version of Nuzzel for people to browse during downtime throughout the day.

Founded in 2012, the San Francisco-based startup has raised a total of $1.7 million in funding to date from Dave McClure of 500 Startups, Eric Ries of The Lean Startup, George Zachary of Charles River Ventures, Ronny Conway of Andreessen Horowitz, and Jeff Clavier and Stephanie Palmeri of SoftTech VC.