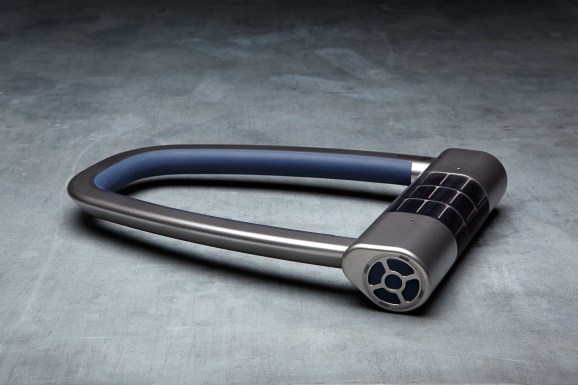 Imagine a Lockitron for your bicycle instead of your door. You could unlock and lock it with an app, no key required, and receive alerts when something fishy is going on.

Well, that’s about to become a reality thanks to Velo Labs and the connected bike lock, Skylock, it’s launching today. The company is opening up a crowdfunding campaign which will help get the campaign’s preorders released.

“We are targeting the urban commuter who uses their bike to get to and from work,” Velo Labs cofounder Jack Al-Kahwati told VentureBeat in an interview.

Making the lock secure and a real tool to help with theft prevention is Velo Labs’ main goal right now, and the lock was designed specifically with this goal in mind.

“The value proposition we’re trying to bring is that this is going to be easier to lock than your usual lock, but we want to make it more secure,” said Al-Kahwati.

The lock has a proprietary dual-lock design that makes it twice as difficult to cut. It is also designed to detect if a thief is jostling it, presumably in an attempt to get it off the bike, and notifies the owner that someone is potentially attempting to steal the bike.

On the rider safety front, Skylock has a number of features aimed to help. The lock’s built-in accelerometer helps it determine if a rider has likely been in a crash. If it thinks that’s the case, the mobile app prompts the rider to respond whether he or she is alright, and, if needed, alerts emergency contacts the lock’s owner has put in during the initial setup.

“A lot of bike riders are getting hit now on the road,” said Al-Kahwati. He added that the company is working on implementing alerts to emergency first responders who would then call the rider to verify the situation.

To counter smartphone battery death or phone loss, the team has added a keypad on the lock that the owner can use as a backup. And to ensure continuous battery life for the lock itself, a solar panel keeps the battery charged.

But all the hardware and features aside, what’s really interesting here are the economic implications the Velo Labs sees. Bike-sharing is the fastest growing segment of the “sharing economy,” according to the company.

“There’s a billion bikes in the world,” said Al-Kahwati. “The denser cities get, the less cars are useful.”

While Velo Labs is first marketing Skylock to consumers, it plans to eventually approach bike-sharing organizations such as New York City’s Citi Bike Share and the Bay Area Bike Share, or even internal corporate bike-share programs such as Google’s. It believes that the shared controls and increased security of the lock itself will be an asset to such programs.

Spinlister, for example, a service that enables bike owners to loan out their bikes to people who would like to rent one, would be a perfect target for this second phase of Skylock’s marketing. Currently, Spinlister takes care of the marketplace piece but can give owners no guarantees on how renters will store and secure their bikes, according to the company website.

The Skylock could also give rise to informal bike-sharing networks, such as groups of friends or roommates wanting to share bikes, or even neighborhood residents forming their own.

For now, the company claims it has no direct competitors, although traditional U-locks are the closest alternatives. Kryptonite for example, offers a range of locks running all the way up to several thousands of dollars. And while Velo Labs is pricing preordered locks at $159 before bumping the price to $249, there will still be a demographic of consumers for which the price is too high.

The Velo Labs team didn’t seem too concerned about their pricing when we spoke with them.

Update: Originally, the team declined to comment when asked if they had or are raising any funding. However, this morning Velo Labs filed a Form D to the U.S. Securities and Exchange Commission which states that is has currently raised $95,000 out of a total of $800,000 they are seeking.

The Skylock is now available for preorder and the company plans to start shipping its first units by early 2015.