After a year of development, consumer finance company Circle is ready to launch its digital currency management service in an attempt to make cryptocurrencies like Bitcoin mainstream.

Circle, founded in 2013, publicly launched its service this morning, which allows people to purchase, store, spend, and convert Bitcoin. The service allows members to link credit and debit cards to their Circle accounts, enabling conversion of fiat currency to Bitcoin and vice versa.

Circle, based globally with headquarters in Boston, M.A. and Dublin, Ireland, has raised $26 million in Series A and Series B funding, led by Breyer Capital and Accel Partners. Other investors include Barry Silbert, founder of the Bitcoin Investment Trust, and Leonard H. Schrank, former chief executive officer of the Society for Worldwide Interbank Financial Telecommunication.

The challenge to mass adoption, Circle says, is friction; that is, people new to digital currency currently face too many obstacles, including a need for technical knowledge, long waiting times, and complex interfaces geared toward traders.

The company’s goal is to make it easy for consumers to instantly deposit and convert currency to a digital form. By enabling people to access and pay with digital currency instantly, the company hopes to increase the number of transactions they conduct with Bitcoin.

Circle says transactions are instant for all users. Other solutions, like Coinbase, require some accounts to wait 4-7 business days to receive purchased Bitcoin. Circle doesn’t charge consumers a bank fee to add Bitcoin or convert it back to fiat currency.

The company won’t charge fees through this service because the focus right now is driving adoption, Circle told VentureBeat in an email. In the future, the company plans to introduce other products built on top of this service that will generate revenue

Another issue with online wallet storage is security, a problem that has plagued both digital currency exchanges and storage solutions. Circle says it answers this issue by offering a range of security precautions, including multi-sig architecture, offline wallets, and two-factor authentication. The company also says it has had its systems tested by a national cyber security firm.

Circle is also complying with federal anti-money laundering laws. The company has registered as a Money Transmitter with the U.S. Treasury Department, meaning that Circle must always maintain full reserves and cannot invest people’s deposits to make money. 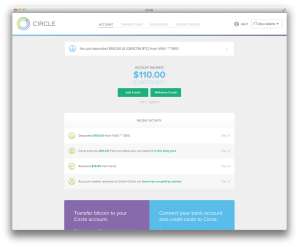 Though publicly launched, the service is still invite only to ensure smooth operations. If you’re lucky enough to get an invite, which you can apply for on Circle’s site, you’ll get $10 in Bitcoin once you create your account.

By facilitating the easy, immediate exchange of digital currency, wallet services can help Bitcoin move from a speculative asset to one that’s moved and used like actual currency. That’s Circle’s modus operandi, and hopefully the company will deliver on its promises.