“Today, we have a company that is out of bankruptcy, and we are 10 people working under the studio-production model,” Chesnais said.

“We pay attention to three things: the IP, the production, and the distribution. Everything else is not our part. We go to and select third-party studios who make very good games. They are not a part of the company at the moment. And then we go into production, like a movie studio. So we select the IP’s; we go one-by-one and select the best one. We pick the one we want to do. There’s no rush.”

What he describes is how things are traditionally done in the more commercial game publishing world. Publishers and developers seek each other out, with the publisher offering financial support, handling PR and marketing, and managing the intellectual property — while developers act as contractors creating the game. For decades, if the industry found this balance of power shift to one side or the other, the shift almost always favored publishers. They had the man power, cash reserves, distribution channels, and resources to allow a product to enter the strictly closed off marketplace.

The industry has seen a tectonic shift, however, in how publishing traditionally works. For the first time, the magic tricks that kept publishers valuable to developers in the studio system have become accessible to anyone that has a game to sell. For example, guerrilla PR requires basic social skills, a word processor with a spell checker, and an email inbox. Entering the basic modern marketing game can be as simple as setting up social media accounts. Funding for development, although trickier than the former examples, is still much more accessible today via crowd-sourcing. Paying for the development costs isn’t as big of a hurdle as it used to be, with professional level software development kits becoming cheaper and easier to attain. Access to a commercial platform’s distribution channel use to be the huge road block keeping small developers out, but we’re in an age where even Nintendo is dropping their guard and allowing almost anyone with a digitally downloadable game onto their machine. Does this situation, where developers having access to tools that use to only be available to publishers, affect Atari’s traditional studio strategy going forward?

“I think at the end of the day it’s not a question of tools, it’s a question of brand and knowing where to reach the consumer.” says Chesnais. “So I think the real question is, let’s say you do a game … OK … is it easier to sell game as X, Y, Z action game or X, Y, Z survival game? I think you get a lot more attraction with an interesting IP.”

Chesnais adds, “There are more online games coming, but it’s super-simple, really. A team of producers paying attention to the game, the IP, doing … you know … the right game. Releasing strategically.”

Above: The one we all remember.

“I don’t want to say it’s a hardware brand first and foremost, but it is also a hardware brand. So we are carefully looking at … you know … we have a replica of the initial Atari 2600, but that is also something that we want to carefully announce in the course of the next few years, which is that with new licensing with the right partners we build the brand not only in the software space but also in the hardware space.”

As someone who is nostalgic for the brand, new Atari hardware would be an exciting and welcome concept, but is this just an up sell for more licensed plug-‘n-play Atari 2600 emulation units to fill the shelves at Wal-Mart, or something else entirely?

“I’m not talking about a new console … but, like, a watch. A gamified watch. It’s not what we are going to do, but think about [something like] that.” Chesnais explains this imaginary concept, “Like a new type of watch is something we ‘could do.’ A watch, branded, where you don’t have an ‘ordinary watch.'” 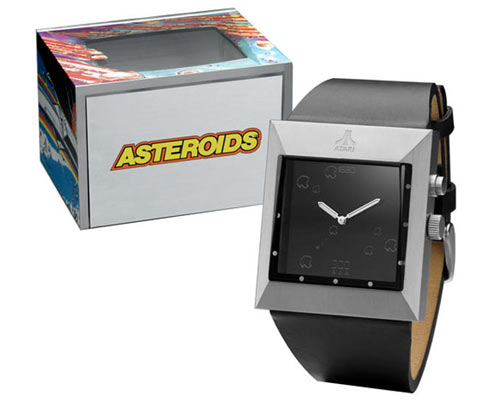 Above: In 2005, Fossil ran an Atari-themed watch collection.

Chesnais has a point. Few video game brands have been marketed so successfully that they transcend being the logo of a faceless corporation and become almost a personal statement to the average person on the street, not just the devoted hardcore fans of the medium. Something that must be every marketing department’s dream: a label that is representative of a generation and instantly recognizable. Nintendo, Sega, and Atari are the very few brands in this industry that could belong to that club.

Chesnais throws me another hypothetical product example. “To give you another idea of something we could do, you have a jacket. We have a plug-in so you can power your iPhone or Android. You had a solar chip on your shoulder so that you power … so that you never run out of batteries,” he said. “Things like this. Would you buy an Atari watch? Would you buy an Atari Jacket that you could plug and repower your iPhone or whatever device you are using? I think you would … I think you would.

“That’s what I mean by a lifestyle brand. So it’s more than just gaming. It goes beyond. …” 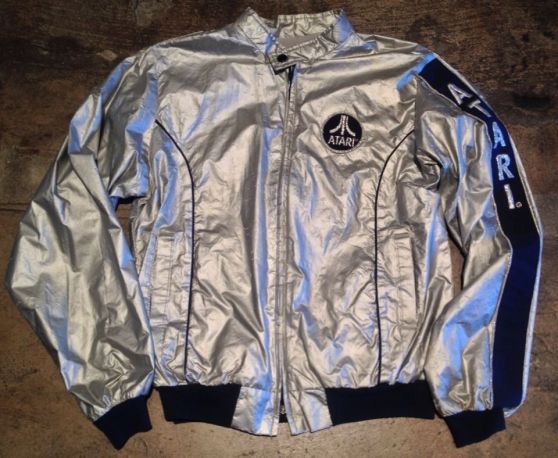 Above: The original Atari jacket

I am trapped in a classic fanboy torture loop of my own making: I care enough about Atari to wind up constantly disappointed with how it has been handled. Why put so much emotional energy into that? In the end we are just talking about stuff with a logo printed on it: a corporate brand for inessential goods. Modern Atari is not and never will be the same ’80s Atari I covet through a nostalgic filter.

Yet I want to see Atari do more than just go through the motions and lean on licensing out its storied franchises while it waits for the next episode of business shifting, investor diddling, and corporate hokey-pokey to dilute the brand any more. If it truly is a cultural icon, let’s see it actually live up to it. It’s an exciting time of change for the industry and I hope Chesnais will not miss some great opportunities with the Atari brand if he does not follow through with some of his ideas.

In the middle of our meeting, Chesnais claimed, “I didn’t buy the company to make T-shirts and stuff like that. We are way, way, way beyond that.”

As an Atari fan, I’m ready to see where “beyond that” actually is.