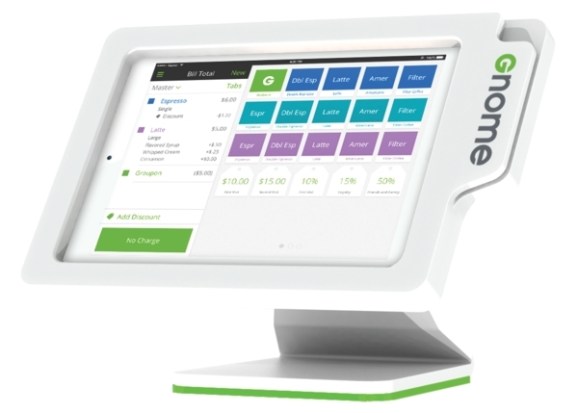 Groupon is launching a tablet-based checkout system that will soon become an integral part of running a Groupon campaign.

The system, named Gnome (pronounced like the genetic material encoded in DNA, not like the plastic garden figurines, although the spelling is certain to lead to confusion there), provides merchants with sophisticated tools that will help them understand their customers better, according to a press release from the company. The software runs on an iPad outfitted with special hardware. It tracks cash, credit, and debit transactions and allows customers to instantly redeem Groupon vouchers via Bluetooth.

Gnome also includes payment processing (for which it takes a 1.8 percent cut, plus 15 cents for Visa and Mastercard purchases), integration with accounting and marketing software, and database creation, which lets merchants automatically store customer names and contact information.

“Gnome will serve as an operating system for merchants to run their entire operation and enable them to create real-time promotions that bring customers into their business when they need them the most,” chief executive officer Eric Lefkofsky said in the press release.

Groupon will charge businesses $10 a month for the Gnome system, according to Re/code. Groupon also expects all of its Groupon-offering merchants, which total over tens of thousands, to adopt the service. It remains to be seen what merchants think of the new fees, especially given the poor retention rate businesses experience with Groupon users.

The company says adoption of the service is necessary because Gnome will soon become a standard part of running a promotion for both vendors and customers.

Groupon is packaging its existing point of-sale system into a better, mandatory product for its merchants. By providing businesses with iPads, customer management tools, and easier coupon redemption, Groupon believes it can drive adoption of its promotions while bringing the service into closer competition with Square for payment processing for small businesses.