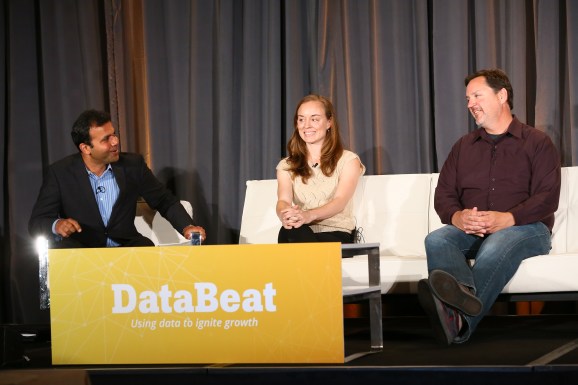 Gordon graduated from George Washington University with a Ph.D in statistics and joined Mindjet, a 15-year-old work-management software company that had just changed its focus to the cloud. When she arrived, Gordon found mountains of data — from Mindjet’s products, Netsuite, Salesforce, and elsewhere — stored all over the place. Her challenge: to bring all of this data together, make sense of it, and use it to boost the company’s performance.

So Gordon brought all of that data into a Microsoft SQL server, where she could look at it in a single place. She could write queries that spanned all of the company’s data — but it’s one that proved to be a manual, time-consuming process. For the amount of data she was working with, Microsoft SQL alone was proving insufficient.

Gordon wanted a tool that sat on top of this SQL database, one that would automate that report and permit others at Mindjet perform their own data research.

“The more [reports] I produced, the more they wanted, so it made sense for them to have their own tool they could use to dig down into the data themselves.”

The tool also had to sit inside Mindjet’s firewall, because she worked with a lot of sensitive data that Mindjet didn’t want to pipe out to a cloud-infrastructure provider.

After weighing several options, Gordon choose Looker, a two-year-old startup that makes business intelligence software. Its “data exploration platform” is like an app layer that sits on top of a database, enabling data pros and amateurs alike to access, organize, and analyze data inside their organization. This data interface enabled Gordon to automate that weekly data report, freeing up her time to focus on more substantial analysis.

Mindjet’s been getting immense value from Looker, she said. For example, Looker analysts built a plugin for R, a statistics-centric programming language Gordon’s intimately familiar with from her grad school days. She was able to pump data from Looker into R and ran a logistic regression analysis on trial users’ activity data.

She used that analysis to develop a model that predicts the propensity of a Mindjet trial user to purchase the company’s software — which the sales team now uses to rank leads. Today, for Mindjet, five times more leads convert to paying customers than before she developed that model.

It wasn’t the simplest road for Gordon, but with a little help from third-party software, she was able to turn previously inaccessible data into major revenue.