Networked Insights, however, wants to be the consumer intent layer.

In other words, a crystal ball — that works — for marketers.

Google knows a lot about the world, and Facebook knows a lot about people. Networked Insights, however, might know the most of any company about consumers. Or at least what they want, and what they do, and what they might buy. So much so, in fact, that it can predict with better accuracy than the big G what movies will be successful, which products people want, and maybe even what’s going to be hot next season on Paris runways.

Over the last five years, Networked Insights has built a marketing platform for a limited number of massive companies like Samsung, Proctor & Gamble, AT&T, and MillerCoors. It hunts the social web, ingesting more than 560 million posts on Twitter, YouTube, Facebook, Tumblr, and other sites every day. It then classifies each of them according to more than 15,000 categories and “converts those consumer ingredients into marketing data,” CEO Dan Neely told me last week.

A common web-wide audience for marketers. And the ability to not just know what people like, but also to predict what they will do.

“Our hope is that we can become the layer that creates the common audience — that’s the power of having this real-time data,” Neely said. “We understand pretty much all consumer data, and the platform has become predictive.”

The company takes a big step towards fulfilling that hope today, as it (finally) launches out of public beta and becomes available to any and all companies looking for social media marketing solutions..

Finding (and targeting) consumers at web-scale

Samsung, for instance, used Networked Insights over the past three years to find and target the “Android gene,” the things that Android users like and want and do. The Korean company used that data to help it beat Apple in the extremely competitive mobile device markets. And Proctor & Gamble uses it to find and target consumers for each of the companies’ many brands, calling it the “first end-to-end enterprise marketing platform we’ve seen.” 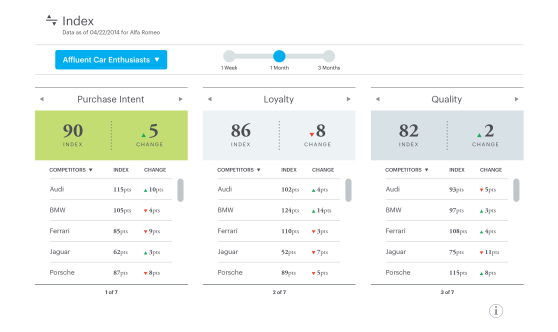 Above: Networked Insights includes social listening technology that shows you how you compare with competitors

What makes it start to be understandable is that Networked Insights is not just a social listening platform like Radian6 or Viralheat or BrandChats. The difference is in the sophistication of the listening, which knows bears from the Bears and a safety from workplace safety. The company’s 15,000 classifiers, and its technology for understanding what consumers mean while hearing what they say, is a massive differentiator.

“We start by ingesting real-time social data, and then we classify it for brands and products,” Networked Insights’ VP of Product Dan Cropsey told me. “Those are the key ingredients of life. And we convert it into metrics that make sense to marketers: health metrics, advocacy metrics, forecasts, targets.” 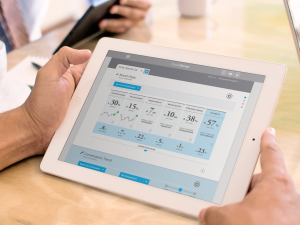 For example, I watched as Cropsey used his own platform to find pretty much all the conversations online in the last seven days between millennials that relate to investments or banking. It took him about five seconds to find almost 800,000 conversations in English on the major social media platforms — five seconds to create a segment, find sentiment and popular topics in it, and prepare to start advertising and reaching out to people within it.

More impressive is using the same tool to not only find conversations but also find who’s talking, and what they care about — as Samsung also did. So, for example, the top TV show for Galaxy fans is Orange is the New Black, meaning the world’s biggest Android manufacturer targeted ads on it for new phones or tablets. Samsung also used Networked Insights to find the top musicians who like its brand, such as Jay Z.

“In the old world, you couldn’t go and buy segments from Nielsen,” CEO Neely told me. “Now you can.”

Finding what you’re not looking for

The danger of not knowing something is often is that you don’t even know what problem you’re supposed to be attacking.

That’s one of the reasons Networked Insights built Doppler.

“Doppler looks for things I don’t know to look for,” Cropsey says. “It allows us to understand the context of the entire conversation — which is how Samsung discovered the weaknesses in Apple.” 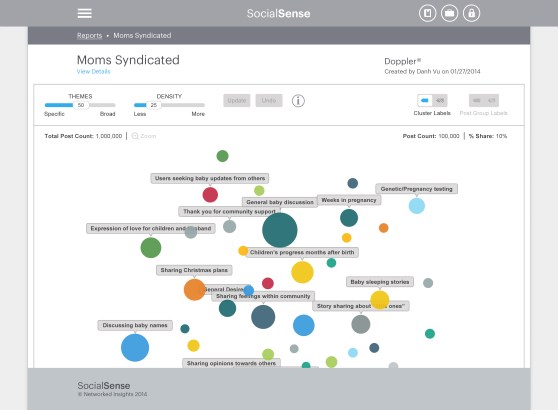 For example, Doppler connects conversations like those of Android loyalists, iPhone fence-sitters, and first-time smartphone buyers, and reveals common themes pro and con. In other words, it’s a real-time, infinite-length, Internet-scale polling platform, which showed Samsung that screen size and price were the two characteristics that could put Apple on the run.

“I can now start understanding what Android loyalists and iPhone fence sitters have in common,” Cropsey says. “Then I can start marketing around that. It’s how people discover the thing they don’t know they need to look for. That’s often the big opportunity.”

It’s one thing to find what’s there, even if you weren’t aware of it. It’s another thing to know what’s coming. That is, however, a big part of the goal behind the Networked Insights platform.

And, the company says, it works pretty well already. Better than Google, it says.

“14 weeks before a movie comes out, as soon as the trailers come out, we know how successful it will be,” CEO Neely told me. “We’ve been able to predict open-weekend box office plus or minus $5 million.”

In fact, Networked Insights says, it’s been able to explain 78 percent of the variance in opening-weekend box office receipts, compared to Google’s 71 percent. But, it adds, Google predicts that a week out, while Networked Insights predicts it more than three months out. 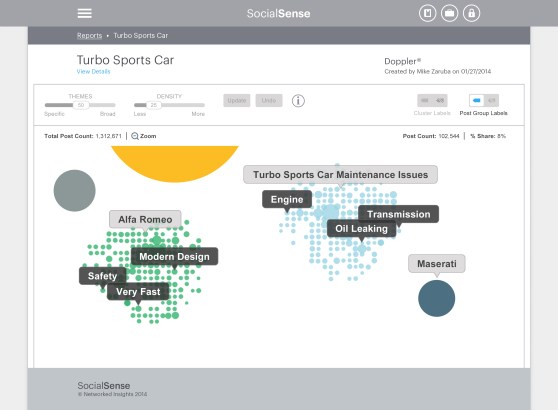 The company has only turned on its crystal ball in certain segments, executives told me, including consumer packaged goods, consumer technology, and the entertainment business. But the company’s predictions are so reliable that companies have integrated them not only into sales projections but also into demand-planning systems that ensure they have sufficient stock on hand to fulfill expected sales.

The key is in applying immediate listening and analysis to the very earliest stages of marketing campaigns. 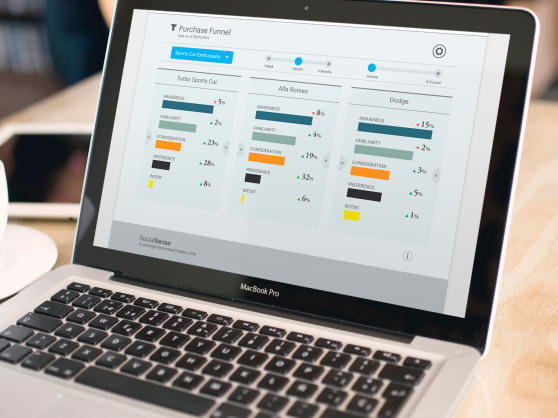 That data — like audience reactions to movie trailers — tells Networked Insights’ clients how consumers are reacting, how likely they are to buy, and in what numbers. If the results aren’t good, brands have time to adjust, refocus, and re-release. That also helps kill the old-school batch-and-release campaign mode of marketing and shifts it to a real-time reactive-and-adaptive mode, in which companies continually update and adjust products and marketing to close in on tighter and tighter alignment with their core segments.

Networked Insights has an impressive vision, already-impressive scope, and impressive clients. But as the company launches out of a very long public beta into the big world of marketing platforms, it faces a long list of impressive competitors too.

Sitecore’s new “experience database” promises to unlock customer data in all its interactions with a brand. Salesforce has built a strong contender in the marketing cloud arena. IBM is trying to tie $3 billion worth of acquisitions into a single way to find, connect with, sell to, and serve customers. And Adobe has one of the strongest entrants into the field with its massive marketing cloud. Perhaps Networked Insights’ closest competitor is Vocus, which combines a strong social story with a marketing automation system.

None of them, however, treat the social web as Networked Insights does, as the new natural playing field for marketers to meet consumers, understand them, connect to them, and fulfill their desires.

“IBM and Adobe are at the forefront right now,” Neely said when I asked him who Networked Insights competes with. “But from our perspective Adobe is focused on the bottom of the funnel, and IBM is focused only on analytics; they don’t have real expertise in social data.”

Rather, the company’s key competition, Neely feels, is from complex systems with multiple components from numerous vendors that companies have knit together to make marketing decisions.