The Wolfenstein first-person-shooter franchise returns this week to put the Third Reich on the business end of freedom on PC, Xbox 360, Xbox One, PlayStation 3, and PlayStation 4. This entry has series hero William “B.J.” Blazkowicz Rip van Winkled 14 years to a 1960 in which the Nazis won World War II and covered the globe with swastikas and really efficient cars.

And since Nazis are still one of two groups that it will always be alright to kill in media (the other is zombies; way to be human, Nazis), Wolfenstein: The New Order promised me a good time of conscience-free slaughter when I jammed it into my PlayStation 4.

It delivered. But its story aspirations often get in the way of the action.

The Nazi regime is all about straight lines. It’s about roads, bridges, and concrete buildings extending into the sky like giant middle fingers at the way things used to be. Everything is ordered, measured, and accounted for. And also, everything sucks, but here’s how you deal with that. 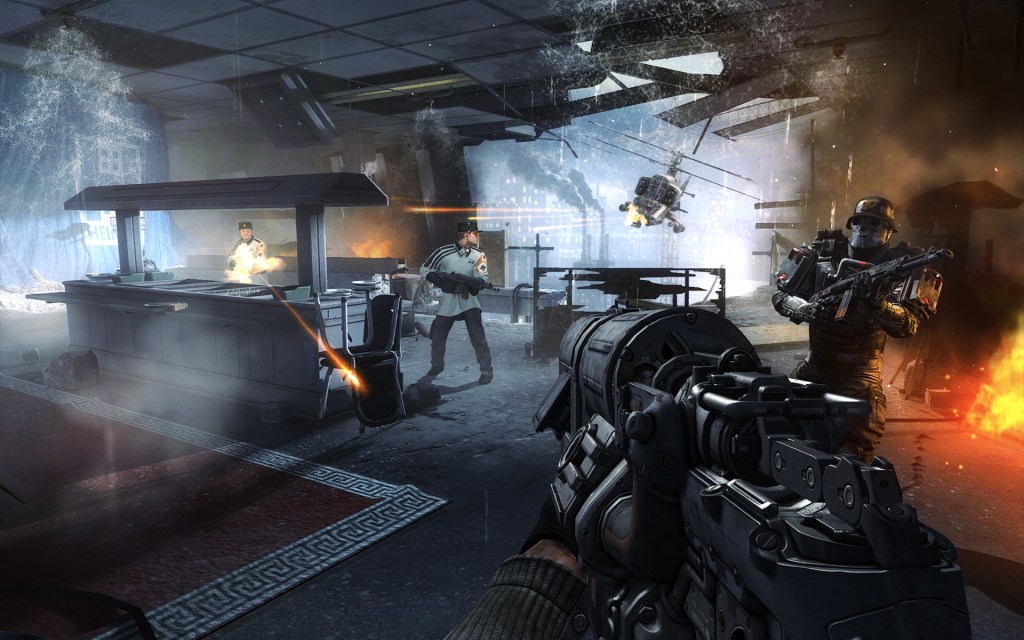 I can’t tell if this was a conscious artistic decision from the developers or if it’s just good level design, but in The New Order, the openness and variety in how to go about your mission presents an interesting counterpoint to the enemy’s straight-edge, calculating approach to everything. It isn’t about marching your Kill Sticks down a series of narrow hallways and Blazkowiczing everything you see (although that is an option available to you), but you have a few options that keep things interesting.

While The New Order definitely pushes you in a certain direction because that’s how levels work, you can choose how you want to get there. This can be something as basic as choosing your weapons, but you can also clear entire rooms stealthily or just bust in and shoot everything that moves. And while it does offer some benefits for stealth, like marking collectibles on the map, either will get you through.

Later on, you have a few more tricks available. At one point, I had a big, open room full of fascist robots in front of me. Sure, I could have just run in there, and that would have been fine, but I took a moment to look around and found a couple hatches where I could move around quietly and take up a more strategic position before I started shooting things. Alternate paths are everywhere, and it just makes for more fun and better stories to tell your friends.

More obviously, however, you reach a point earlier The New Order where you have to choose between two options, and your decision affects everything afterward, including characters and the routes available to you in later levels. It effectively splits the game in two and adds some replay value, which is nice.

Maybe you’ve heard about the Nazi moon base or the giant robot dogs or the enormous walking tank thing, and maybe you haven’t, in which case the first part of this sentence contains some spoilers.

But here’s basically all you need to know other than that: You can dual-wield in The New Order.

By which I mean you can dual-wield everything. Except for your laser cutter, but that doesn’t matter because you’ll be too busy lumbering around with a pair of the biggest shotguns I’ve ever seen in a game turning everything into Nazi Soup.

You can also fire two sniper rifles simultaneously, and that makes absolutely no sense from either a physical or practical point of view, but it’s in there because why the hell not.

Above: I’m telling you: robots. Robots for days.

When you’re dealing with an alternate 1960 in which Nazis have conquered the planet with their mad science and cold, unfeeling panzerhunde, it’s probably a good idea to figure out how you’re going to tell that story and then commit to it. The New Order can’t decide if it’s a pulp-horror/sci-fi yarn or a serious contemplation on the terrors of war, regret, and loss.

Blazkowicz doesn’t help at all. In one scene, he’ll be cracking his knuckles and lifting weights like famed sociopathic meathead Duke Nukem and muttering to himself about how much he hates Nazis and what a weird word “buoy” is. And then, moments later, he’ll be talking about how far humanity has fallen and telling a traumatic story about a time when he was a kid, and he went swimming in a pond and came out covered in leeches.

It’s really weird. I don’t get that guy at all.

Surely, it’s a bad thing when evil people force their will on the world and rule over everyone with cold and ruthless cruelty. But when a significant part of their method involves robotic dogs and a research base on the goddamned moon, you might have to sacrifice gravitas because that stuff is just straight-up ridiculous.

But I was never sure if this was supposed to be a fun, Inglourious Basterds-style Nazi-shooting romp or a more meditative story of a broken man following the only course he’s ever known. By the end, I felt like the developers were trying for something like 2011’s superior Resistance 3, but it was too late. I’d shot too many robots to death with my ridiculously oversized shotguns. 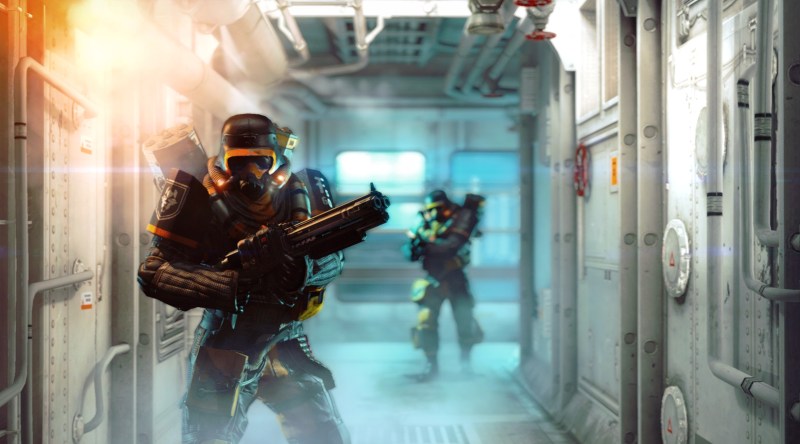 Above: You know it’s only a matter of time before you get on a U-boat.

The New Order contains a vehicle level that is to frantic, fast-paced action what my roommate’s dog is to not being a snuggly little bear. It contains no combat, some minor puzzle-solving, and in the end, I’m not really sure what it did for the story other than giving Blazkowicz ample time to mutter to himself about all the terrible things that have happened to him in and around water.

The home base sections are similarly drab, filler-y, and too numerous. I assume they’re supposed to be a little respite and an opportunity for character development, and they are, but they’re also a repository for tedious fetch quests and wandering around a map that’s just a little bit too big for its content.

I’m not one of those anti-tutorial people; I actually appreciate it when the thing I’m playing tells me what all the buttons do. It’s just a nice service.

But all of that goodwill vanishes faster than the fine, red mist that was, just moments before, some soldat or another when I can’t read the help text.

It kept showing up in the corner, and then I’d squint a lot, and then it would disappear. I’d have to go into the tutorials section of the pause menu for the non-Superman version. And that was after I figured out on my own which button opened that screen because the game had told me that in the same tiny print.

It’s a small problem in the long run, but it caused a needless interruption.

Above: The Reich made it to the moon a decade before we did.

While shooting fascists in video games will likely always be fun, The New Order falters when it’s trying to decide how you should feel about it. Its options and ridiculously sized weapons provide a lot of enjoyment, but the story tries so hard to be serious that it forgets that this is a game that includes Moon Nazis.

Wolfenstein: The New Order is out May 20 for PC, Xbox 360, Xbox One, PlayStation 3, and PlayStation 4. The publisher provided GamesBeat with a free PlayStation 4 retail copy for this review.