“Dudes, we forgot the cloud!”

Blue Jeans, which calls itself the “#1 cloud-based video conferencing service,” is mocking Cisco’s announcement yesterday of “Collaboration Meeting Rooms,” a cloud-based service that will bring costs down to “tens of dollars” per month. 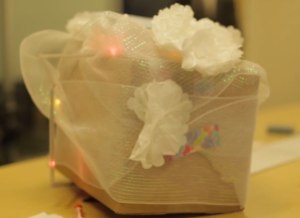 That is, of course, where Blue Jeans has already been for more than a year.

Blue Jeans is headed by a former Cisco executive, Krish Ramakrishnan, who started the company to disrupt Cisco and other teleconferencing incumbents’ complex and costly video conferencing systems with a web-based model that uses commodity hardware already built into most laptops, tablets, and smartphones. The company currently has over 2,000 corporate customers, Blue Jeans says, with some clients putting more than 50,000 employees on the system.

So Cisco announcing a cloud product was a chance for Blue Jeans to, essentially, welcome Mohammed to the mountain:

Blue Jeans, which integrates directly into Salesforce, raised $50 million last fall, bringing its total investment to $100 million. At the time, Ramakrishnan told me the company would use the money to “set the world on fire.” He also said that Blue Jeans was anywhere from a third to a half of the entire videoconferencing market — in just two years.