This sponsored post is brought to you by Staples. They’ve got everything a business needs to make more happen. Even a hardware-focused investment firm.

Lemnos Labs, a seed stage investment firm and incubator based out of San Francisco, has emerged as a potentially disruptive force in the current epicenter of high technology.

Ironically, it’s done this by eschewing the very software-centric trends — things like SaaS, the cloud, and data science — that made the area famous. Instead, it’s focusing on hardware startups only.

We spoke with Jeremy Conrad, a founding partner at Lemnos Labs, about why he and his co-founders, Helen Boniske and Eric Klein, decided to focus solely on hardware. We also touched on his career path, which took him from the mechanical engineering masters program at MIT to active duty with the Air Force to running an investment fund/incubator, and on the lessons he’s learned along the way. 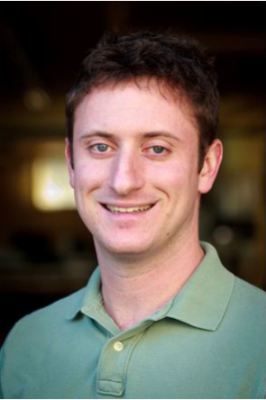 Above: Above: Jeremy Conrad, founding partner at Lenmos Labs

Here is the edited transcript of our conversation.

VentureBeat: What is the story behind the name?

Jeremy Conrad: Lemnos is a Greek island and in mythology it is the place Hephaestus (God of metallurgy) had his forge. He built all the cool things in Greek mythology, like Achilles’s armor, and we really liked the imagery of being the place where great things come from.

VentureBeat: So is one of the founders a Greek mythology buff then?

Conrad: No, no. It actually came from three hours spent at a Barnes & Noble when we were trying to figure out names. We went to the bookstore and just looked through stacks and stacks of kid’s books — a great place to start because you can just flip through them quickly — and just kind of fell upon it.

VentureBeat: You also call your office “The Forge,” correct?

Conrad: Right. So the island Lemnos is actually volcanic, which is where the idea of it being a forge came from in mythology.

VentureBeat: So what does it typically look like in the office? We assume no hammers or anvils?

Conrad: (Laughing) Actually there’s a lot of hammers, but anvils are pretty expensive. We have a pretty full shop here; we’re getting a laser cutter in the next couple of weeks and we’ve got a full set of tools — drill presses, sanders, grinders — all that standard light/heavy equipment you’d find in a standard shop.

In the main warehouse, there will be seven to eight companies in house at any given time, so we need to have the resources on site for them to be able to build their product and trial things out.

VentureBeat: Why focus only on hardware?

Conrad: Helen and I are both mechanical engineers, and after I spent five years active duty in the Air Force building stuff, we moved out here and looked into starting our own company. We wanted to start a hardware one, but quickly realized that no one was funding early stage. We asked why, and all these people were saying “oh, it’s too hard, it’s too difficult, it takes too much money.”

I used to fund lots of different early stage grants while in the Air Force and, for example, we were able to do weapons-grade laser systems for under $100,000, so we saw a kind of gap in the market and pursued it.

With 19 investments to date, and our first ten going on to raise about $40 million after going through our program, we’re pretty happy with what we’ve done.

VentureBeat: What projects currently being worked on have you the most excited?

Conrad: So we just did an investment in a company called Ceres that does precision agriculture. As an example of something they can do, they could use multifunction cameras to tell you if trees or crops are in need of water or nitrogen or if you’re over-watering them. It’s a really exciting company because the United States has 300 million acres of crop life and I think it’s one of those companies that if successful can have a really big impact on the day-to-day lives of people.

VentureBeat: Could you describe the typical experience a company in residence would go through?

Conrad: Yeah, so they’d be in the warehouse for a year to a year and a half, and that’s really because we’re very high touch. We spend three to five hours per week with our companies, doing everything from overall design review, where we’ll dig deep and really make sure they’re thinking through every issue they might have over the next two to three revisions, to when they go and fund raise. We’re very involved in that part of it.

We also have a large mentor program, so while they’re here, one to two times per week we’ll have an expert in. It might be a design expert, it might be someone who understands UI standards, it might be a venture capitalist who’ll sit down with them for 20-30 minutes and answer the questions it’s sometimes hard to ask.

VentureBeat: How do you select residents for your program?

Conrad: We look at a few core criteria. The first is really the people. Not only do we want people who can do the work, but also those that have a good cultural fit as well. Since we have a large community here and it’s all very interactive, we want people who we think will fit in with that crew.

Two, we look at core technology. Does it work? Is it viable? To a certain degree is it scalable? So if you’ve got one product, does it work just as well when there’s a thousand or a million?

We also look at market size. The reality is that our investment is up to a quarter of a million dollars, so we really have to know that if we get to market there’ll be later stage VCs who’ll want to invest as well.

VentureBeat: Is this what you imagined you would be doing when you were younger?

Conrad: Not at all. So, when I went to college I really wanted to be an astronaut, but after the Columbia disaster they moved to the model where they only do a few crews a year, so you’re basically fighting for one of ten spots a year. There’s more people in America who win $50 million in the lottery than that.

VentureBeat: What is the most surprising lesson you’ve learned in founding a business?

Conrad: When you’re first starting out, having your a low bank account balance causes this kind of overwhelming stress. You have to recognize it and talk to your co-founders and understand that it’s going to be tight and might not work out, but that’s okay, because you’re smart and capable, so worst case scenario you just get a traditional job. It’s a part of being a founder that people don’t really seem to want to talk about, the psychology and stress that you go through.

VentureBeat: Are there any leaders you most admire?

Conrad: You know, when I think about where we want to be long term I’m really impressed with George Zachary [General Partner, Charles River Ventures]. He’s been making investments for a long time and has a truly phenomenal track record. I think it’s really easy to get caught up in the short term, but the reason we all do this is because we want to build big, long-sustaining companies.

VentureBeat: If you could give a piece of advice to aspiring entrepreneurs, what would it be?

Conrad: Have a support network. Find other entrepreneurs who are a little further along than you that you can turn to for support.

A lot of times as a founder or CEO you just think you’re screwing everything up, but then you go talk to four people and realize that everyone else went through the exact same thing. Really, finding a couple key people that you can turn to when you hit these crises is critical.

Conrad: Just that I’m really bullish on hardware in general. When we started two and a half years ago, we were were laughed out of some rooms, people didn’t think it was smart to only invest in hardware companies. But I think we’re on the tip of the iceberg for what this can be.

All these industries — everything from agriculture to oil and gas — haven’t really changed in a long time, and they’re going to get turned on their heads by new stuff that’s coming out. We’re going back to core technologies, and that’s something we’re really excited for.