NEW YORK — Microsoft is adding another member to its Surface tablet family.

The company today announced the Surface Pro 3, a new tablet with a 12-inch screen. Not does it sport a bigger screen, this device also has a faster processor and a thinner design than the Surface Pro 2, the 10.6-inch tablet announced last September.

At a press event today, Panos Panay, the creator and head of the Surface project, explained that Microsoft has worked to develop a device that can replace both your laptop and your tablet. That was the original mission of the Surface family, but those devices were always suffered thanks to their 10.6-inch screen size.

With a larger screen, the Surface Pro 3 is now something that’s more attractive to consumers used to working on bigger laptop screens. 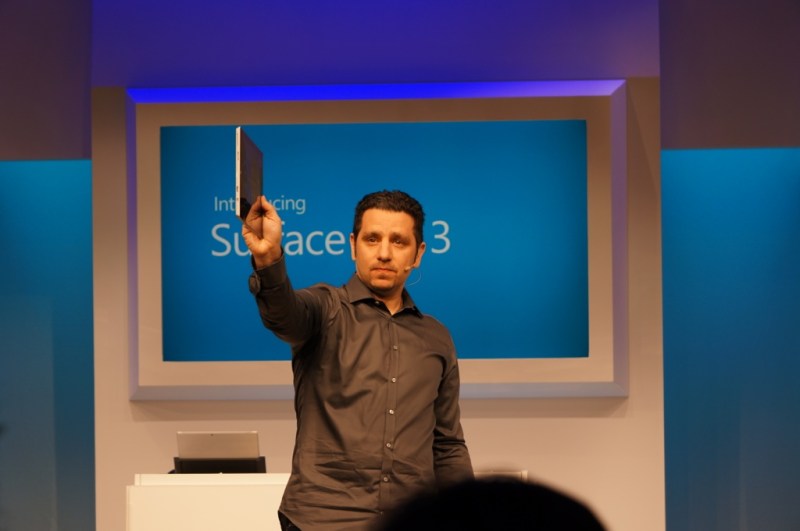 Above: Surface head Panos Panay shows off the thin profile of the Surface Pro 3.

The Surface Pro 3’s 12-inch screen sports a resolution that offers 6 percent more screen real estate than the 13-inch MacBook Air. It also features a new kickstand, which has even more levels of flexibility than the past generation of Surfaces. It can now hold the tablet at a 150-degree angle, which is ideal for artists who want to use the Surface like a canvas.

At around 1.7 pounds, the Surface Pro 3 weighs much more than Apple’s iPad Air, which now clocks in closer to 1 pound. But given that it packs in all of the power of a powerful Windows PC, that’s an impressively low weight. Attaching one of the new keyboard covers makes it a bit heavier, but it’s still far below the 13-inch MacBook Air’s 3 pounds.

Microsoft worked closely with Intel to integrate its latest processors into the Surface Pro 3. Panay claims its the thinnest device out now that uses Intel’s faster Core i7 processor. Developing the tablet with Intel’s help was the “closest thing to a technical love affair that I can possibly think of,” Panay said.

Microsoft has also added some ingenious new features to the Surface Pro 3. Its new stylus is now clickable like a normal pen, which opens up some interesting functionality. If your Surface is asleep, you can click the pen once to wake it up and begin writing immediately. Click the pen again and your note heads to your OneDrive cloud storage. The pen also serves as a sort of remote for the Surface — if you’re taking a photo, you can now click the pen to automatically send that image to OneNote. 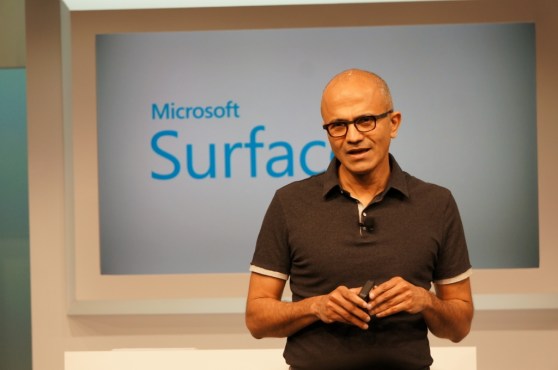 “The question that needs to be asked and answered is, ‘Why hardware?'” Microsoft CEO Satya Nadella said as he kicked off the event. “We clearly are not interested in building refrigerators or toasters. We are not building hardware for hardware’s sake — we want to build experiences that bring together all of the capabilities of our company.”

Microsoft’s Surface devices have embodied its vision for Windows 8 — but they’ve also been confusing for consumers. The Surface and Surface 2 are Microsoft’s direct iPad competitors, but Apple’s tablets can’t run older Windows apps due to their ARM processors. The Surface Pro and Surface Pro 2, on the other hand, can run old Windows software and are priced to compete with ultraportable laptops.

Microsoft’s first Surface device was a failure (though the first Surface Pro had a lot to like). The Surface 2 was a vast improvement, but slow developer adoption of Windows 8 held it back. Meanwhile, Windows PC makers like Lenovo have been pushing out their own hybrid devices, which are competing directly with the Surface.

While many were expecting Microsoft to announce a smaller Surface tablet today, I’m glad the company chose to deliver a larger tablet first. Philosophically, I think Microsoft has been on the right track with the Surface line — it’s just struggled to figure out the ideal way to make a hybrid tablet. The Surface Pro 3 could be the tablet to finally make Microsoft’s Surface dreams come true.

The Surface Pro 3 will be available tomorrow starting at $800 with a Core i3 processor; you can also buy more expensive versions with faster Core i5 and Core i7 processors. We’re testing the Surface Pro 3 out now, so check back soon for a complete hands-on.