We know that thanks to Risk Management Solutions, which has built a big data platform for catastrophe risk modeling. Bobby Soni, chief platform and services officer at RMS, spoke about the challenge of building that platform at VentureBeat’s DataBeat 2014 conference today.

RMS started two decades ago, but more recently it has launched RMS(one), a service for risk management experts that can process an enormous amount of data and help insurers quantify the kind of risk they face as a result of natural disasters.

“We have models that allows insurers to figure out that, if there was an earthquake in the Bay Area or a typhoon in Japan, or a fire in London, or a terrorist attack in downtown New York, to understand the damage profile and the financial risk they are carrying,” Soni said. “When Hurricane Sandy hit, we know that the damage was worse from the storms that followed and flooded the subways.”

It became hard for the New York transportation authority to get insurance after that, so the agency floated a $200 million bond. The risk profile for that bond is powered by the RMS(one) platform.

MongoDB helps deliver the big data so that those in the front line who are writing policies can get access to the data in an instant. That demands real-time access, a high degree of efficiency and an ability to scale up smoothly from one server to hundreds of servers. The data often has to be accessible across open computing platforms.

Founded in 1988, RMS had models for a long time, but it needed to build something that was a “paradigm shift” away from what it was doing in the past. It had to create a near-real-time enterprise system that worked not just for data scientists but for the insurance experts across entire companies. The company can do that by using elastic compute technology that takes advantage of commodity servers.

“The computational need to run these databases in real-time is tremendously high,” Soni said. “Five years ago, this would not have been possible.” 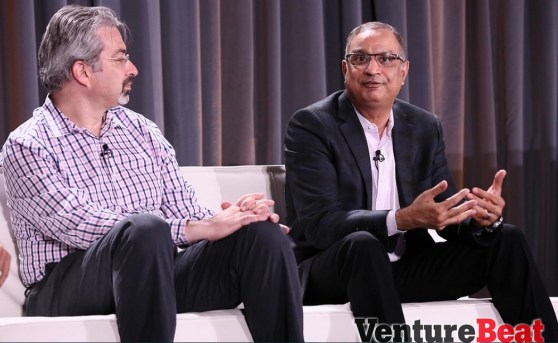 Above: Max Schireson of MongoDB and Bobby Soni of RMS