Sometimes I wish my sword would just shut up.

I mean, he’s a nice guy and all. He clearly means well. But does he really need to comment on every single thing? You can’t go to the bathroom without him waxing poetic on the tragic state of the world.

Of course, the sword I’m talking about is the Transistor, the namesake of Supergiant Game’s followup to Bastion. Like Bastion, Transistor is an isometric action game with beautiful art and a character who loves to hear himself talk (actually both voiced by the same person).

Transistor is out today for the PlayStation 4 and PC, and while you can immediately see the similarities between it and Bastion, it definitely carves out an identity of its own. 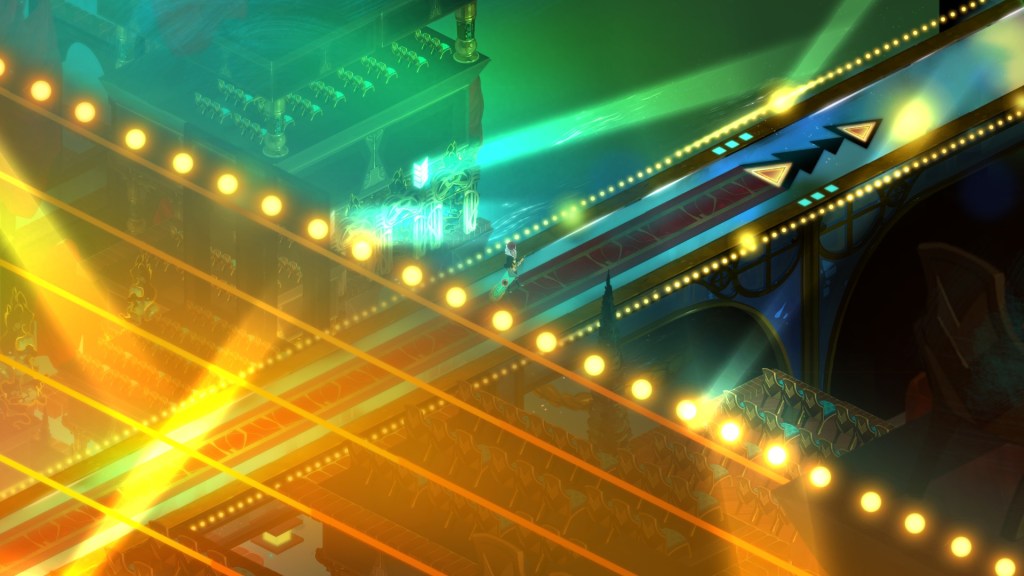 Above: Why does neon make everything look cooler?

Transistor takes place in a fictional, science-fiction-flavored world called Cloudbank, a colorful metropolis that radiates with neon and atmosphere. It really is a gorgeous setting, which makes its imminent destruction all the more somber. More than with any other game so far, I was taking advantage of the PlayStation 4’s Share button to capture screenshots (which litter this review) of the beautiful landscapes and dazzling backgrounds. Cloudbank is a world you’ll love to admire.

While Bastion was fairly straightforward with its action, Transistor takes a more methodical approach. Sure, you could just fight whenever you want in real time, but most attacks are slow and cumbersome. Instead, you’re far more effective when you set up a series of moves in the Planning mode. You can freeze time with a push of a button, enabling you to move around and plan attacks, all of which fills up a meter. Once the meter’s full, you can’t plan anymore. Then you just go back to real time and watch your strategy play out.

A lot of your abilities have specific attack patterns (some hit everything in a line, while some have a blast radius), so positioning is very important. This turns Transistor’s combat into something of a hybrid between a high-energy brawler and a turn-based role-playing game. It’s creative, strategic, and — most importantly — unique. As beautiful as Transistor is, the combat stands out as its best feature. 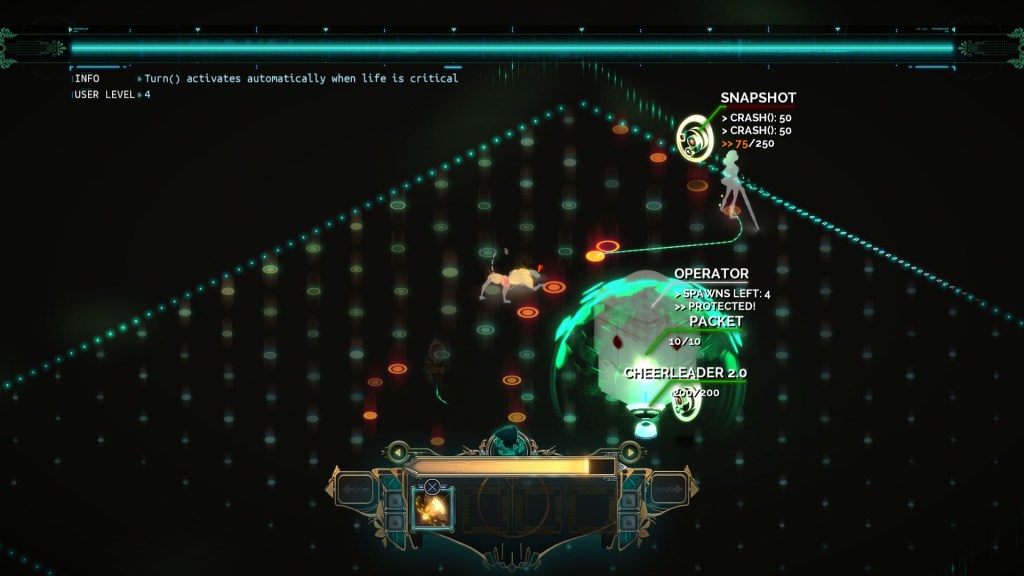 Above: What a battle looks like in the Planning mode.

Speaking of combat, you fight with a wide variety of skills you slowly unlock throughout the game (you can learn more about them with our guide). Some are straightforward strikes and projectiles, but others are unique (like one that summons a wolf to fight for your side, or one that homes to the nearest enemy and drains its health).

You can only equip four moves at a time, but you can also use abilities to augment each other. This is where the customization options really shine. For instance, one ability sends out a ball that’ll bounce between targets. Instead of equipping it as a main move, you could use it to add a bouncing effect to a different attack. You can also put each ability in a passive slot, which will give you bonuses based on the move. For instance, a strong attack will instead increase your overall damage.

You can spend a lot of time experimenting with all of the combos, and you’ll definitely come up with some favorites. Plus, you have a limit on how many abilities you can equip. You really need to think about what you need and what you can live without. Regardless, the amount of customization possibilities is staggering, and tinkering with the combos is one of the best parts of the game. 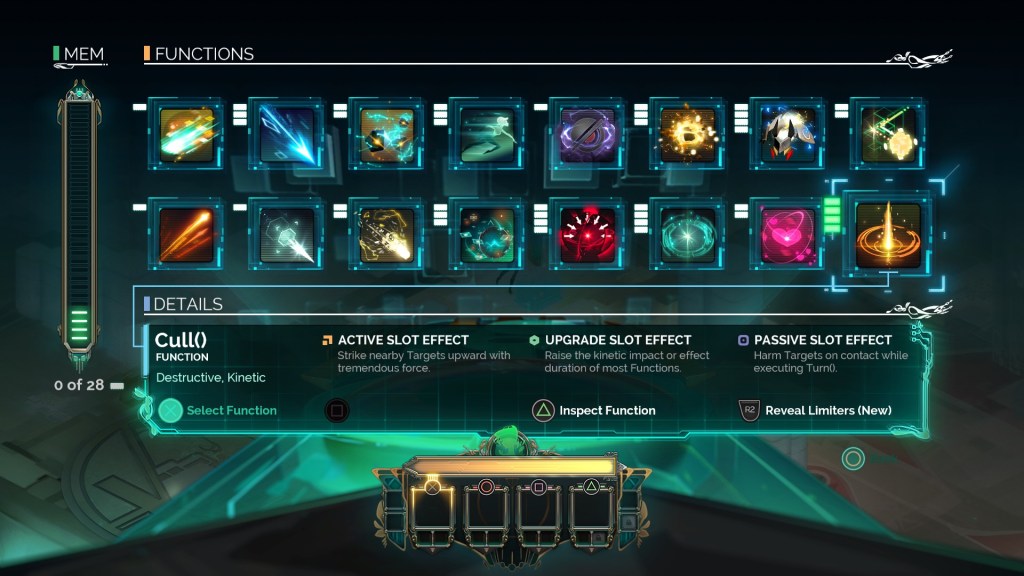 Above: All of the abilities you can unlock and use in Transistor.

OK, so Transistor is beautiful and fun, but the story elements don’t offer much. Ironically, the thing that made Bastion so memorable actually hurts Transistor. I’m talking about the voice acting. Bastion had a calm, gravelly narrator comment on everything the player did. It was neat and amusing, largely because it was kind of tongue-in-cheek.

You don’t get a narrator in Transistor, but a voice inside your sword fills the same function by commenting on pretty much everything you do. And as charming as it was in Bastion, it’s annoying in Transistor. It’s one thing to have a storyteller offer constant insight and commentary, but the Transistor’s incessant blabbering really got on my nerves. It doesn’t help that Red, the player-character, can never talk back. She lost her voice right before the events of the game. I’m not sure how or why. If the game explained that, I missed it. It was a bad plot decision, though. The Transistor’s constant moaning could have worked much better if he wasn’t always talking into a vacuum.

I think it largely has to do with the delivery. Everything he says, from a warning to a confession of love, comes out dry and soft. It’s like a prose reading at a coffee house. In fact, every character talks like this. It’s like the whole cast reached some drug-induced zen zone before they stepped in front of the microphone. I think they were hoping to convey some sort of somber tone, but it just comes across as bizarre. It’s a world where everyone talks like HAL 9000 from 2001: A Space Odyssey, but without the excuse of being a computer. 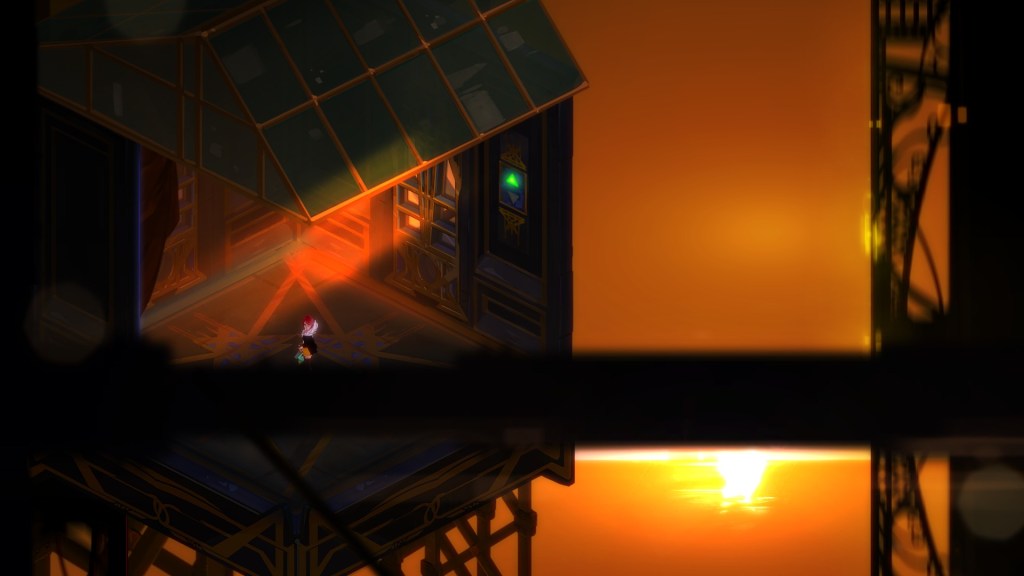 Above: Does this remind anyone else of Braid?

What is happening again?

I’m also not really sure what exactly was going on. A group of people let loose a bunch of digital demons, which are now destroying the city. I figured that out about halfway through. Transistor decides to start in the middle of things, which feels like an artistic decision largely for the sake of making an artistic decision. Where am I going? What am I doing? Who are these people? Why did they do that? These were questions I constantly asked.

Of course, you can learn details by listening to audio logs and reading text via data terminals, which is becoming the new exploding barrel in the world of game clichés. How about a clear plot organically told through character interactions? Instead, I wasn’t even really sure the game was ending when it was. I mean, I don’t know. Was the plot wrapped up? It was hard to tell, since I didn’t really know what the plot was in the first place.

Transistor is beautiful and engaging with a brilliant combat systems that encourages careful planning before and during battle. It’s just a shame the story holds it back from being a true classic. It’s a more flawed experience than Bastion was, but it’s also a more interesting one. It takes risks. It ditches Bastion’s charm and lighter moments for a darker, more somber story. Not all of the risks, however, pay off.

Transistor is out now for PlayStation 4 and PC. The developer provided GamesBeat with a code of the PS4 version for this review.