Taking a risk with the community of gamers, ZeniMax has filed a lawsuit against virtual-reality pioneer Oculus VR and its founder Palmer Luckey.

The lawsuit could stir some complicated reacitons from the game industry and fans. Gamers love VR and wouldn’t want anything to obstruct its progress. But Facebook’s $2 billion acquisition of Oculus VR wasn’t popular with the backers of Oculus’ Kickstarter crowdfunding campaign.

The litigation isn’t a surprise, since ZeniMax had publicly complained about John Carmack, the cofounder of ZeniMax-owned id Software, when he left id last year to join Oculus VR. Carmack, who became chief technology officer at Oculus before the Facebook deal was announced in March, has stated that he used zero code from ZeniMax in any Oculus software. Oculus has previously called the assertions by ZeniMax “ridiculous.” 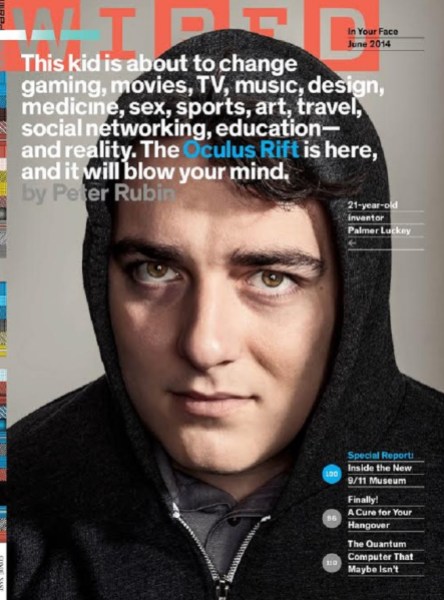 Above: Wired cover of Palmer Luckey of Oculus VR

In a press release, ZeniMax said it was suing because Oculus and Luckey allegedly misappropriated ZeniMax trade secrets related to virtual-reality technology. It filed suit in federal court in the Northern District in Texas. The suit claims breach of contract, trademark infringement, unjust enrichment, and unfair competition.

In its own new statement, Oculus VR said, “The lawsuit filed by ZeniMax has no merit whatsoever. As we have previously said, ZeniMax did not contribute to any Oculus technology. Oculus will defend these claims vigorously.”

ZeniMax says that the defendants exploited ZeniMax’s intellectual property that was developed over years of research and investment. It noted that Oculus violated a signed nondisclosure agreement. The company said the defendants “refused all request from ZeniMax for reasonable compensation.”

“Intellectual property forms the foundation of our business,” said Robert Altman, Chairman & CEO of ZeniMax. “We cannot ignore the unlawful exploitation of intellectual property that we develop and own, nor will we allow misappropriation and infringement to go unaddressed.”

Carmack, the legendary first-person shooter game developer of id Software, became part of ZeniMax back in 2009 in an acquisition of id. He frequently made contributions to technology out of his own intellectual curiosity. His obsession with making a rocket that could take off and land was outside of his work at id Software, and ZeniMax wasn’t about to claim that it owned any of his rocket creations.

In 2012, Carmack solicited information about virtual reality heads-up displays. Luckey, who was then a lab technician at the Institute for Creative Technologies at the Mixed Reality Lab at the University of Southern California, responded on a forum to Carmack’s query. Afterward, Carmack asked Luckey if he could buy one of Luckey’s head-mounted displays.

Carmack made his own software to work on Luckey’s Oculus Rift virtual-reality goggles, but the founder had already moved forward on other technology for his goggles, which immersed you in a 3D virtual world. The goggles were relatively primitive at the time.

At the time, Luckey signed a nondisclosure agreement with id’s parent company, ZeniMax Media. That was related to a VR Testbed application, which Carmack had posted on in public forums. Carmack gave a lot of his time and he publicly touted his own software for the Oculus at the Electronic Entertainment Expo video game tradeshow in June 2012. That helped Luckey gather a lot of momentum for his project and his startup, Oculus VR.

The endorsement from Carmack also enabled Oculus to raise $2.4 million from backers of its crowdfunding campaign on Kickstarter. At that point, Carmack was a hero, helping the video game industry embrace a fundamentally new technology for gamers. Oculus and Luckey were also popular among game developers and fans for pushing beyond boring consoles.

Oculus walked on water after that, first raising $16 million. Carmack then saw much more potential in the future of Oculus. He tried at first to work for both id and Oculus. Carmack’s employment contract with ZeniMax expired in July 2013. He officially joined Oculus in November. That parting seemed amicable at the time.

Then Oculus raised $75 million in December. Marc Andreessen, creator of the groundbreaking Netscape web browser and a tech billionaire, threw his support behind it. The project moved from a hobbyist’s cause to a potential blockbuster backed by one of the shrewdest technologists in the world.

But Carmack wasn’t the only one working on virtual-reality technology at ZeniMax and id. Oculus VR hired five people from id in addition to Carmack. They got a whole department of people. Luckey acknowledged that the help from Carmack was pretty important to making the Oculus Rift work.

The picture got more complicated this month when Facebook bought Oculus for $2 billion. And ZeniMax’s legal department moved into action after that happened.