Middle-earth: Shadow of Mordor represents a new direction for games based on the fantasy universe of J.R.R. Tolkien, with an original story that takes it in the direction of stealth combat, mind control, moral ambiguity — and Batman. Our hands-on preview with this game, which will debut on multiple platforms on Oct. 7, shows just how far Warner Bros. Interactive Entertainment is going toward providing Tolkien fans with something they’ve never seen before. 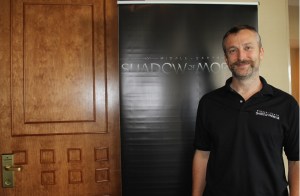 Shadow of Mordor is an important game for Warner Bros. as it tries to drum up interest in the Tolkien universe by going beyond the Lord of the Rings and The Hobbit movies and toward original stories within known properties. WBIE is trying to expand the property for a time when it will no longer be able to cash in purely on tie-ins with Peter Jackson’s multibillion-dollar movies.

It is doing so by bringing in the successful action-fighting gameplay of the brutal fighting segments of the Batman Arkham titles, which have been tremendously successful for WBIE. Warner is giving the game the full Hollywood and AAA developer treatment, said Michael de Plater, design director at Monolith for Shadow of Mordor, in an interview with GamesBeat.

Monolith Productions is making the game for WBIE. Christian Cantamessa, writer of the award-winning Red Dead Redemption game, is the author of the original story for Shadow of Mordor, which is set in Mordor between the events of The Hobbit and The Lord of the Rings. Garry Schyman, an acclaimed musical composer who made the soundtrack for BioShock Infinite, is creating the original score. Voice actors include Troy Baker and Nolan North.

Shadow of Mordor has beautiful 3D art and brutal hand-to-hand combat, with both short-range sword play and distant archer combat. The story begins as Sauron is driven out of the Mirkwood forest stronghold of Dol Guldur and establishes himself again in Mordor. He overwhelms the rangers of Gondor at the Black Gate at Mordor’s border and begins building his army of orcs in the land of shadows. 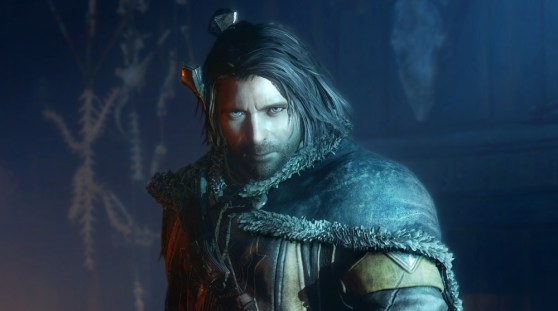 Above: Talion in Shadow of Mordor

Baker, who voiced Joel in The Last of Us, does the voice acting for the main character Talion, a ranger of Gondor who teams up with a spirit called a Wraith (voiced by Alastair Duncan) to go behind Sauron’s lines in Mordor and cause havoc. Other actors include Laura Bailey, playing Ioreth; Liam O’Brien, playing Gollum; and North, playing the Black Hand.

Talion seeks vengeance for the loss of his family, and he is aided in his personal vendetta by the mysterious Wraith, who has powers like a Ringwraith from the Lord of the Rings. The story will take you to the Sea of Núrnen, the breadbasket of Mordor, and inside iconic locations within Mordor. As a ranger, you’ll chop off heads and limbs in brutal fights with squads of enemies. If you get surrounded by the orcs, they’ll take you down. And the war chiefs are like bosses: much harder to kill.

“We get to explore our creativity and do something that hasn’t been seen, but we get to do it 100 percent within the canon and authentic to the lore,” de Plater said. That was something within the lore that was important to us, to explore these characters with interesting shades of gray. Characters that are more along the lines of Saruman, wanting to raise an army to challenge Sauron, or Boromir or Denethor or Theoden, or Thorin with his fall because of the temptation of the Arkenstone, or Thranduil. There are all these amazing characters in The Hobbit and Lord of the Rings that aren’t just good guys or bad guys.”

As you play Talion, you discover that he is not so nice when he dispatches orcs. The unusual thing is that each orc in the game has its own personality, unique look, and traits. Monolith’s character creators have “humanized” them, fleshing them out like Jackson did with the “Pale Orc” character in The Hobbit films. As Talion, you can kill them. But you can also use Wraith powers to dominate their minds and control them. In doing so, you can turn them against other orcs.

“There was a line Tolkien wrote, which is, ‘We were all orcs in the Great War,'” de Plater said. “We didn’t want to have a kind of generic fantasy approach to the orcs. We wanted to treat them as what orcs represent. These are like human beings, but they’re human beings who are driven by the emotional extremes of fear and hate.”

He added, “Humans can very much act like orcs. We wanted to take very believable human traits and just turn them up a bit to explore that. We wanted them to be real characters. That’s important to the nemesis system, because these have to be real characters and real villains with real motivations. It’s key to the whole idea of what power and domination mean. It’s about using fear and hatred to get people motivated in a certain way. That’s core to the game.”

At the heart of this is a gameplay invention dubbed the Nemesis System. When you bring up Nemesis, you will see a hierarchy of orc leaders. You can more easily dominate and control the lower tier of orc officers, who have amusing names like Dush the Diseased or Barfa Blood Licker. Then you can get closer to their bosses, and use the lower orcs to assassinate or weaken the chiefs. Once they are weakened, Talion can go in and finish off the chiefs. If Talion attacks an orc chief without using his powers of domination and infiltration, he has a tough fight. 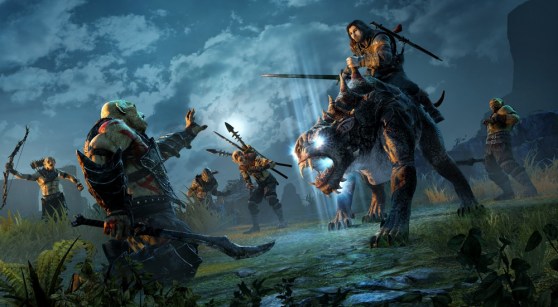 Above: Middle-earth: Shadow of Mordor

Nemesis is what makes gameplay sessions unique in Shadow of Mordor. You don’t have to follow a linear narrative. You can go after any of the orc leaders that you choose, in any order that you wish. Each chief has strengths, weaknesses, and an overall ranking. The higher the ranking, the bigger the rewards for taking him down.

As an example, I played one round where I located an orc officer. I wounded him and then took control of his mind. Then I set him loose against his boss. He attacked his boss, but only weakened him. I then had to figure out how to approach the chief. I did so by hanging high, knocking out some guards at the top of a stronghold. The chief was protected by a bunch of soldiers on the ground level. I couldn’t attack, because he was too well defended.

But he was near several large creatures who were chained in cages. By shooting arrows at the cages, I could set the creatures loose. They attacked the chief’s bodyguards. As those creatures chewed up the bodyguards, I found myself feeling oddly sorry for them. Eventually, I jumped into the fray. It was a good plan, but the bodyguards were still pretty fierce. They finished me off before I could get to the chief. 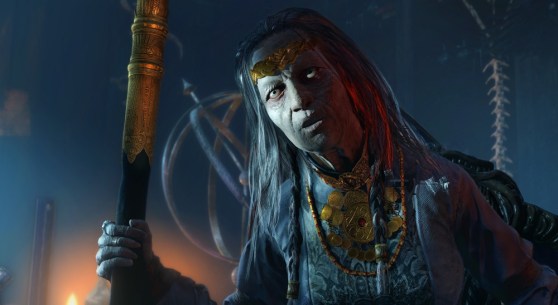 Above: The queen of Nurn gives you a mission in Shadow of Mordor.

That’s the kind of combat that you will find in Shadow of Mordor. If you are looking to lead a giant army from Gondor against Sauron’s forces, you’ll be disappointed. At this point in the story, Gondor is weak. It is a game of infiltration. As you fulfill missions against the orc leaders, you gain additional powers like arrows that explode upon contact. You can go on missions such as spying, terrorizing, assassination, and kidnapping. In other words, you’re a pretty dirty fighter. As you gather rune rewards from each mission, you decide how to spend those rewards to improve in different ways.

“The focus is on Talion and the Wraith. The two of them behind enemy lines, using the powers of the enemy, the powers of the shadow, against him,” de Plater said. “It really is about being deep behind enemy lines. There are human allies, other humans that do fight alongside you. Queen Marwen does have some forces there that are holding out against the orcs, and there are some others you liberate. But Gondor is not coming to anyone’s aid at this point. They’re dealing with their own problem, which is what Talion has to deal with, and why it falls to him to hold the Dark Lord there.”

The friendly characters, like Marwen, will be few and far between. She will give you a goal to go after a boss. You can co-opt a sub-boss and help that character work his way up to becoming a war chief. Then you can try to get the war chiefs to betray Sauron. That’s a pretty lofty goal, but one you can pursue in many different ways.

The mature-rated title will come out on the PlayStation 4, Xbox One, PlayStation 3, Xbox 360, and Windows PC. A companion Palantir app will allow you to receive tips from the Wikia user-generated fan site that offer you counsel based on listening to the sound of the console game and determining where you are in the levels. Once it does that, it shows you tips and tricks related to the section where you are playing.