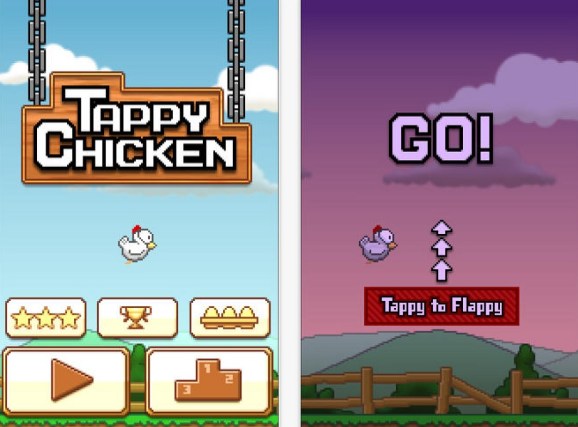 Tappy Chicken may very well be the silliest game that Epic Games has ever published. The mobile game is a satirical version of the surprise hit Flappy Bird, but its real purpose is to show off how easy it is to publish games with Epic’s Unreal Engine 4 game programming tools.

Tappy Chicken was made in Unreal by one artist, Shane Caudle, with no programming experience. Epic says it demonstrates the engine’s flexibility and ease of use for budding indie game developers. The game is debuting today on iOS, Android, and HTML5. The latter means it will function as a web game or a mobile web title, accessible via web browsers on any supporting device.

While Tappy Chicken doesn’t use the full 3D graphics capability of the engine, it shows how almost anyone can make a fun and pretty game for mobile devices and web browsers.The game is built with Unreal Engine 4’s Blueprint visual scripting. It can be modded and extended, even by inexperienced game designers.

Epic plans to release updates for the game as improvements and new features become available. In response to competition from Unity Technologies, Epic has made it easy to port Unreal Engine games to Windows, Mac, Linux, SteamOS, iOS, Android, PlayStation 4, Xbox One, HTML5, and virtual reality platforms, including Oculus Rift and Sony’s Project Morpheus. The cost has been lowered to just $19 a month.

Epic says that the free title Tappy Chicken has 2D visuals with levels that are procedurally generated. That means there’s no end to them. The gameplay is easy yet hard to master. It’s a small download, and it is integrated with Game Center leaderboards, achievements, and iAds on iOS. On Android. It is also integrated with Google Play leaderboards, achievements, and AdMob support.