When a giant, fire-breathing alien is chasing you, the only story you care about is whether you live or die in the next 30 seconds. But it’s nice to know that Evolve has a larger narrative that you can dive into when you’re not busy fighting other players online.

Up to this point, everything we’ve seen about Evolve (out on PlayStation 4, Xbox One, and PC this fall) has to do with multiplayer matches in Hunt mode: up to four players control the hunters, and a fifth takes over the alien. The hunters must kill the creature before it grows too powerful (by eating other forms of wildlife) and completes its objectives, like destroying a shield generator. Though the few rounds I played were thrilling, it was hard to get a sense of the story while I was figuring out the controls and communicating with my team via headphones.

So I asked the two cofounders of developer Turtle Rock Studios (the studio behind Left 4 Dead), Chris Ashton and Phil Robb, to fill me in on what kind of tale we can expect to see in the final game and how that’ll unfold as you play. Here’s an edited transcript of that interview.

GamesBeat: I’ve heard a lot about the multiplayer but not so much the story. How much can you say about it?

Phil Robb: Without going into too much detail just yet: Humanity has broken their earthly bounds and started to spread into the galaxy. The further out you go, the more rough and frontier-like these colony planets become. We used the Western expansion of the United States [as inspiration] — it’s a similar idea. People leave and go to the frontier for new opportunities. They get out to these planets, like Shear, which is the planet this all takes place on. It’s in the Far Arm, basically one of the arms out on the Milky Way, and on the edge of civilized space. …

Every once in a while, they’ll run into wildlife or something that’s just a little bit beyond what they’re capable of handling. So they call in these guys — who essentially are hunters; we like to call them “planet tamers” — and their job is to deal with all the indigenous life. …

Chris Ashton: And that sort of explains why they have harpoon guns and tranquilizer rifles and all of that kind of stuff.

Robb: This is their job. Our hunters arrive on Shear, and they’re confronted with something that’s a little bit beyond anything they’ve ever fought before. These aren’t just dumb animals. These things are intelligent. They have a motive that is unclear, but there is a malign intelligence that’s driving them. It’s not even clear where they’re from. They’re not from Shear. … 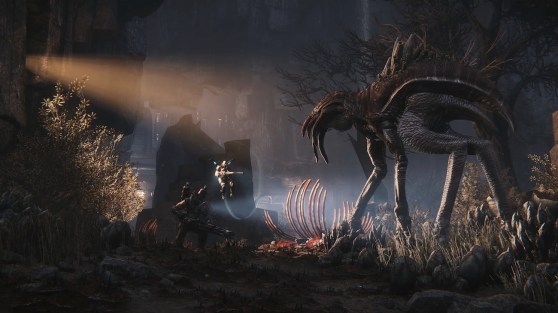 Above: Evolve’s maps teem with wildlife.

GamesBeat: Is there some sort of campaign to explore that story?

Ashton: Right now, we’re just talking about the Hunt mode specifically. But we haven’t gotten into much detail as far as different ways you can play the game.

Robb: I can say that — you remember from Left 4 Dead how, every once in a while, the characters would just start talking to each other about various things? We have a lot of opportunities to do that kind of stuff [in Evolve]: In the dropship where you’re waiting to drop in, there is a nice chunk of time there that we allow the characters to converge and talk about things. Any time there’s a lull in the action, we can have one of the characters pipe up.

GamesBeat: In both Left 4 Dead games, you only had to worry about four characters talking to each other. So far, you have eight — two per class — in Evolve. What are some of the challenges of writing conversations for those characters?

Ashton: Yeah, it’s a lot more work. The amount of [dialogue] that has been written and recorded for this game is astounding. It’s a staggering number because when you think of not only do all the characters have to have all the lines for combat, but we also have lines for combinations of characters, where they’ll banter back and forth. So it kind of explodes.

It’s been a fairly significant challenge for us to figure out how do we get all these voice actors and how do we write all these lines in time to ship the game. It’s been a fun, crazy road. …

GamesBeat: And when you think of all the different ways you can combine those characters, it sounds like you’ll have a lot of those specific conversations.

Robb: I believe we’ve got conversation trees for any combination of the characters, too. Obviously, some characters are gonna interact more with certain characters, like Val and Hank might have more to say to each other than Val and whoever. They all have some level of interaction. You’ll start to realize that some of them have … I don’t wanna say they hate each other, but there are some antagonistic relationships between the characters. If you play as them on the same team, they might snip at each other or you might find out that ‘Hey, these guys actually really like each other and they’re almost like best friends.’

Just from a narrative standpoint and a character standpoint, we think that stuff is kind of fun. It makes the characters more lovable. As a character designer, that’s what I like to strive for: characters that people can identify with and fall in love with and want to dress up [as] for Halloween, cosplay, or whatever. [Laughs]