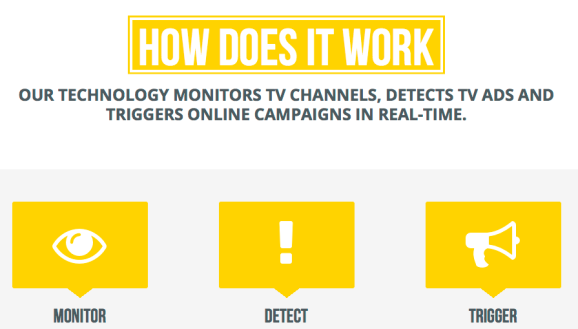 Paris-based startup TVTY has just nabbed $4.5 million to lower the chances that you can avoid ads from a specific company by going online during TV commercial breaks.

“TV viewers are looking at another screen during your ad,” the company says in an animated explanation on its website. “Do you want their attention back?”

To roadblock you, the company says it monitors round-the-clock over 120 TV channels in a given market, detects ads in less than half a second, and uses an API to trigger supporting or competing online ads on a participating online ad network, including pre-roll ads in videos, search-related ads, and display ads. The technology and data enable syncing of TV ads with ads in websites, videos, social media, mail and texts.

“A tool like this that automates [the advertising connections] allows marketers to do things they couldn’t do before,” Forrester analyst Jim Nail told VentureBeat. He dismissed the idea that viewers might think they’re being stalked, with ads following them between screens.

“People are used to seeing ads relevant to content,” he said, adding that TVTY’s technology enlarges the idea of content as something that exists between two screens.

Advertisers, the company says, can sync their online and on-air ads through a campaign it calls Boost, or “counter-attack competitors in real-time” via the company’s Guerilla effort. The company is obviously also building up quite a treasury of data about ad airings, which can be filtered by countries, channels, date & time, categories, brands, or products. TVTY said its technology is currently in use in the UK, Germany, Italy, Spain, Switzerland, Turkey and France.

Of course, there’s no reason that this punch-counterpunch for your attention needs to be restricted to ads versus ads. It can be ads versus tracked events, with a great play in a sports match triggering an ad with one of the featured players, or, say, a trigger in a game show question delivering a corresponding ad online.

The company, initially started to develop mobile apps, created this technology in response to a request from one of its partners. Co-founder Eliott Reilhac told Rude Baguette, an appropriately-titled French startup blog, that the tech analyzes images from a channel and compares them with images in a database.

The database, he said, “is of every TV ad that has appeared on TV at least once.” Each new ad is indexed and tagged by staff member. “You will always need a human being to check,” he said. TVTY gets 5 to 10 percent of what the online ad generates, Reilhac said.

The $4.5 million, raised from Partech Ventures, 360 Capital Partners and angels, brings the company’s total to $6.8 million so far. Plans for the funds include opening a New York City office.