The new game categories in the Google Play Store have helped spur an increase in revenues and downloads by making it easier to find the right type of game, according to a report by mobile market researcher Distimo.

Gaming is still the most popular category across the mobile app stores in both revenue and downloads. On March 18, Google shook things up a little by creating more categories within gaming in order to bring more attention to different kinds of titles. April was the first month to evaluate the effect those changes had in the Google Play Store.

Revenues for games rose 15 percent in April, thanks in large part to the new categories and growth in markets such as Japan, the U.S., and South Korea. Role-playing games, particularly those on mobile messaging networks, saw the biggest boost after the change, according to the analysis by Distimo’s Christel Schoger. Searching for a specific game has become easier, and apps have more ways to become visible now. 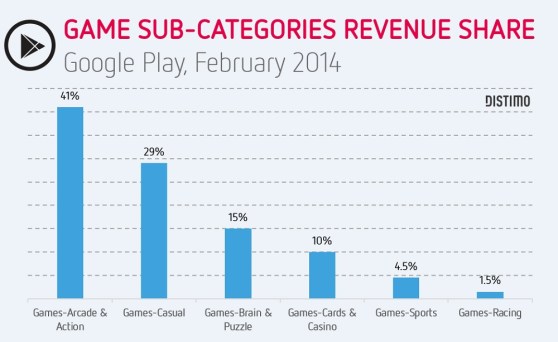 In the past, Google Play had six genres. Now it has 18. It kept Casual, Racing, and Sports. And it added categories such as Role Playing and Family apps. It changed Arcade & Action to Arcade, switched Brain & Puzzle to Puzzle, and updated Cards & Casino to Card. Then it added new categories such as Music, Board, Adventure, Simulation, and Strategy.

And Gamevil’s Monster Warlord moved from No. 302 in Arcade & Action to No. 8 in Adventure. Device installs increased by over 400 percent in April over March. There were similar gains in other categories. 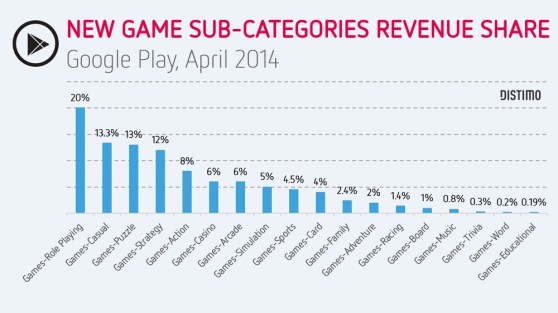 Above: Distimo revenue share by category on Google Play

Distimo noted that Google’s move now means that it has roughly the same categories as Apple. But Apple allows developers to choose two subgenres while Google and Amazon allow only one genre at a time for a game.

Now, Casual is No. 1 with 30 percent, Arcade is No. 2 with 14 percent, Puzzle is No. 3 with 12 percent, and Action is No. 4 with 10 percent. The install volume is now more spread out across the 18 genres. Half of the categories now have less than 4 percent of the total.

Revenue changes were similar. Arcade & Action had 41 percent of revenue in February while Casual had 29 percent, Brain & Puzzle had 15 percent, and Cards & Casino had 10 percent. Under the new categories, Role Playing shot to No. 1 at 20 percent, Casual was No. 2 at 13.3 percent, Puzzle was No. 3 at 13 percent, and Strategy was No. 4 at 12 percent. Role Playing had a high volume of Korean Kakao mobile messaging network games, as well as Japanese role-playing games.

App makers had to chose which genre to assign their games to. Arcade & Action developers shifted their titles to Arcade, Action, Role Playing, Strategy, and Adventure. For the most part, Google made automated changes for the developers, but companies could change the category manually if they didn’t agree with it.

Distimo tracks about 3 billion downloads per quarter for 20,000 developers worldwide. 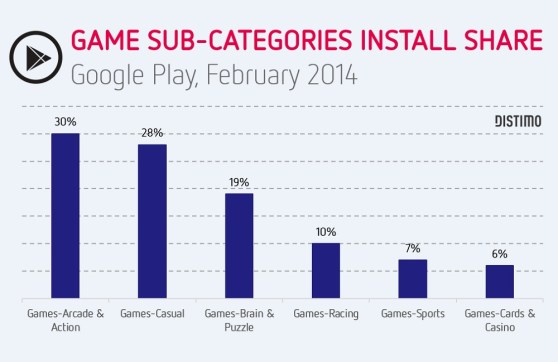 Above: Distimo install share in April 2014 on Google Play