What if the world were one giant touchscreen?

Announced today, Thermal Touch uses standard and thermal cameras to track heat signatures people leave when they touch surfaces. The potential applications are enormous: Tap your door to enter a keycode without the keypad; tap your table to play a game of chess without the board; tap a print ad to hit ‘buy’ without a smartphone.

“Someone’s got to do it, otherwise we’re going to be stuck with shiny rectangles for the next decade.”

Metaio has been working on Thermal Touch for around a year now, chief executive Thomas Alt told VentureBeat. It’s still years away from appearing in a consumer product, but Metaio is already showing off an early prototype to its device-making partners.

The augmented reality software firm hopes its partners will like the demo and decide to incorporate thermal sensing into their mobile devices — whether they’re phones, tablets, or wearables like Google Glass — or into the base tech that appears in those devices.

Alt declined to tell us which of its partners have already seen Thermal Touch but said the response has been positive across the board.

Chip maker Intel is one of the tech titans already working with Metaio. It’s integrating Metaio’s augmented reality software into the software development kit for its “RealSense” 3D camera.

“In the not too distant future, I foresee that consumer devices will have these sensors embedded into them,” said Alt. 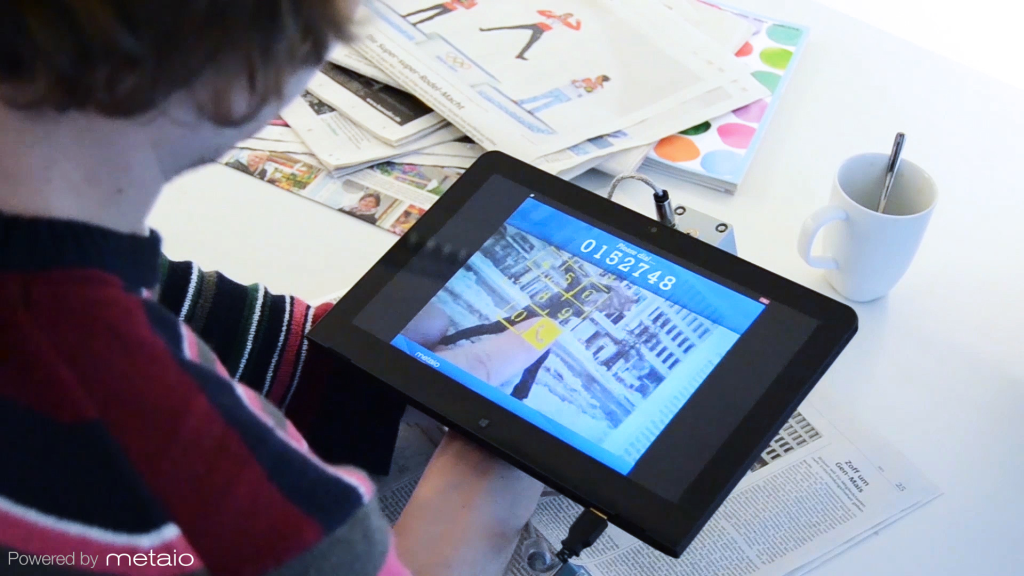 Above: Metaio is a software company, but it cobbled together this hardware prototype to test the tech.

Thermal Touch could become a salient technology for professionals, too. We’re already beginning to see applications for augmented reality in health care, manufacturing, and law enforcement — and Metaio could help those industries squeeze even more functionality out of mobile and wearable devices. Lots of tasks in manufacturing require you to have your hands free, for example, but the environment is too noisy for voice commands. Thermal Touch is a natural input mechanism in that domain.

Thermal sensors in phones, tablets, and wearables may be the next big innovation in mobile technology. It may seem unlikely now, but people once considered regular mobile cameras inessential too. Today, of course, they’re a crucial part of smartphones that give rise to billion-dollar companies like Instagram. It’s not infeasible to think thermal sensing could be next in line.

Now, device makers, are you ready to stick these things in your gadgets yet?