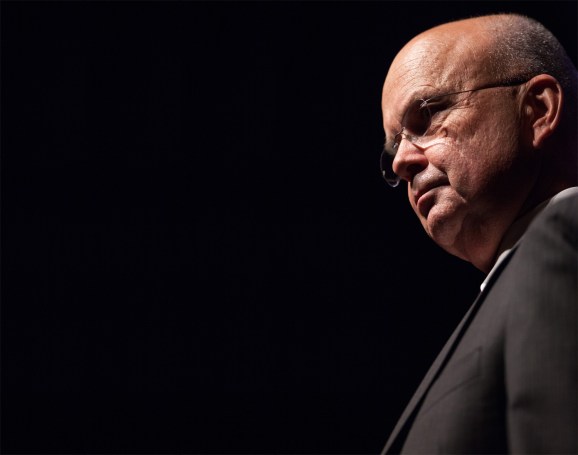 That’s according to Hayden’s own admission. But it nearly doesn’t matter, he said.

“He may have done serious, serious damage already with what he’s made public now,” Hayden told VentureBeat Wednesday.

“Frankly, Snowden has made so much classified American information public that he may not have had to provide specific things to the Russians,” Hayden said.

Hayden was responding to assertions from former Soviet KGB general Oleg Kalugin Wednesday that Snowden is cooperating with his Russian hosts and lives under control of the country’s federal security service, or FSB.

Kalugin told VentureBeat that Snowden, thought to be residing outside Moscow, has made the FSB “very, very happy” with the secrets he’s allegedly given Russian security services.

“All I know from facts is that he’s been granted temporary asylum by the Russian Federation. It’s tremendously ironic that Snowden fled from being an employee of one of the most transparent intelligence communities in the world to one of the most autocratic states in the world,” Hayden said.

The impact of Snowden’s document theft will be felt for generations, Hayden said. And the impact goes beyond leaking operational intelligence files.

“When you talk about leaks, the metaphor is water. You lose a bucket, a tub, a barrel, that tells you how bad the leak is. Snowden isn’t like that. Snowden isn’t revealing our analysis of X, Y, Z.

“What Snowden has revealed is the plumbing. He’s revealing how we go about collecting intelligence. Therefore, that kind of information makes any adversary better able to protect their communications against NSA,” he said.

America’s adversaries and the global public have been able to glean rare insight into NSA operations as a result of Snowden’s actions.

“I would lose all respect for the Russian and Chinese security services if they haven’t full exploited everything Snowden had to give,” Hayden said.

Hayden described Snowden, 30, as a shrewd operator who was able to exploit lapses in the NSA’s technical abilities to monitor its own communication channels and red-flag employees illicitly downloading digital files from agency servers.

“Following the Bradley Manning event, NSA began putting powerful network-monitoring tools on its network. NSA Hawaii was about the last part of the network to get that kind of coverage, and Snowden took advantage of that lapse,” Hayden said.

Before he successfully fled to Hong Kong and then to Moscow last August, Snowden worked as a civilian contractor at an NSA facility in Hawaii thought to focus on the Pacific Rim.

Bradley Manning was an Army intelligence analyst who, beginning in 2010, leaked the largest cache of classified documents in U.S. history. They later became the basis of the WikiLeaks fiasco, in which thousands of U.S. government diplomatic and intelligence cables were published in the press.

Manning was sentenced to 35 years in prison last year.

Hayden painted a portrait of Snowden as an idealist who knew exactly what he was doing when he came aboard the NSA as a civilian contractor. Snowden has told interviewers that he became a man of conscience when he realized the scope of NSA surveillance.

“This was not an innocent suddenly faced with things he didn’t expect. He wasn’t a gatherer; he was a hunter. He aggressively pursued information in order to, at least in my mind, weaken America’s health,” he said.

Hayden had harsh words for Moscow, pointing to the upheaval caused by recent Russian military incursions into the Crimea, in particular Ukraine.

“There’s no question Russia is not a superpower. American intelligence is now going to have to turn its attention back to Russia,” he said.

Hayden, a retired four-star Air Force general, was NSA director from 1999 until 2005. Then-President H.W. Bush later appointed him CIA director. He served in that capacity until 2009.

Hayden denied the NSA had embarked on a massive campaign to collect every phone call of American citizens in the name of fighting terror. And he took a shot at U.S. political leaders for not sensibly conveying what the NSA’s true mission is in the first place.

“One of the things that became quite clear in this whole episode is how flat-footed our government has been in explaining forthrightly and clearly to the American people what NSA is doing and why. The government has always been behind the power curve, so to speak, in talking about this story,” he said.

“There’s still a large part of the American population that thinks were collecting their emails. But, no, we’re not.”