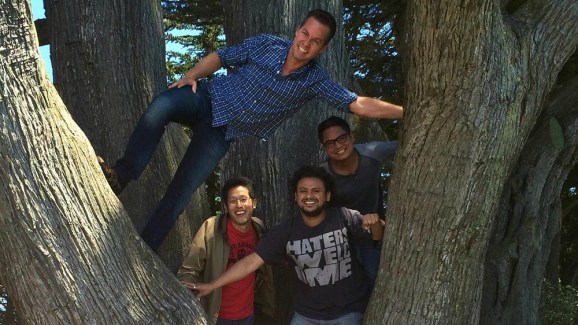 Mastermind Studios is coming out of stealth today as a new mobile game studio founded by a team of proven hit makers. IDG Ventures and IDG China provided the initial funding for the San Francisco startup.

The core team includes four veterans who worked together at Gree as well as at Funzio. Their games included Crime City, Modern War, Kingdom Age, and War of Nations. Collectively, those games have generated a couple of hundred million dollars in revenue — a very large amount for mobile games. In fact, the Funzio games did so well that Japan’s Gree paid $210 million for Funzio in 2012.

The team is headed by Dan Chao, chief executive of Mastermind Studios and the former director of product on Gree’s mobile hit War of Nations. He was an early employee at Funzio and was lead game designer behind Crime City, Modern War, and Kingdom Age.

In an exclusive interview with GamesBeat, Chao said that Mastermind will focus on mid-core games, or hardcore games with shorter game sessions that work well on mobile. And those games will focus on more interaction and moment-to-moment decisions within a social framework. The focus will be on games that are fun and not just addictive. You could think of the vision as something in between the slower interaction of Modern War and the fast interaction of real-time strategy games like StarCraft.

“Social mobile games have been evolving,” Chao said. “Strategy games are slow and work really well with a touch interface. What hasn’t worked well are games with more interaction. What we want to do is make a game with more strategy, more decision making, from moment to moment, where things aren’t so binary. We want interaction the battle. It should require quick thinking, but not totally overwhelming like a lot of PC games.”

Mastermind’s cofounders include Matt Pahl, vice president of game design at Mastermind and formerly the lead designer on War of Nations while at Gree (He also worked on the fantasy online game Evony.); Tim Robles, chief technology officer at Mastermind, former director of engineering at Gree, and also an early employee at Funzio who worked on almost all of its iOS titles; and Sumit Agarwal, vice president of engineering at Mastermind and former lead server engineer on War of Nations at Gree.

“I’ve backed these guys when they were at Funzio, and they’ve continued to be visionaries with Mastermind Studios,” said Phil Sanderson, partner at IDG Ventures. “I’m expecting big things from them.”

Chao said, “We’ve all worked successfully together. It was a good opportunity for going off on our own. We talked to investors and ended up with Phil because he really got what we were going for.”

Mastermind has hired some other employees, and it is heavily recruiting, he said.