H1Z1 starts out simple. You have your fists. You’re in a world full of zombies. You have to find other survivors and stay alive.

There’s no automatic weapon hanging from a nearby tree. But you could find an ax, chop the tree down, and craft some crude arrows from it. But watch out: The zombies will come for you once they hear you chopping. And that’s the way Sony Online Entertainment wants its latest massively multiplayer online game to begin. The zombies aren’t terribly smart, but they’re relentless. And you have to team up with other humans (and avoid the people killers among them) in order to survive.

In a world full of post-apocalyptic zombie games, SOE hopes this beautiful and persistent 3D world, which looks like a small town region in the forests of Oregon, will be different. To announce the game, Sony held a marathon session on game-streaming site Twitch, and it started a direct conversation with gamers on Reddit. It will test just how community-minded gamers are. They can band together and survive in hand-crafted fortresses or die separately.

We had a chance to jump into H1Z1 at a recent press event and then talk about it with senior game designer Jimmy Whisenhunt.

GamesBeat: Were you part of the Twitch reveal?

Jimmy Whisenhunt: Yeah, I was.

GamesBeat: I heard John Smedley talking at the Game Marketing Summit about that. We did an interview with him about — it was a first, where he had never gone straight to Twitch before.

Whisenhunt: Yeah, we went straight to — we hadn’t said anything, and then John’s like, “Hey guys, Twitch stream, let’s go!” It’s exciting. Players feel like they’re important to us, and they are. They get to spread the word on their own and tell us what they want from it. 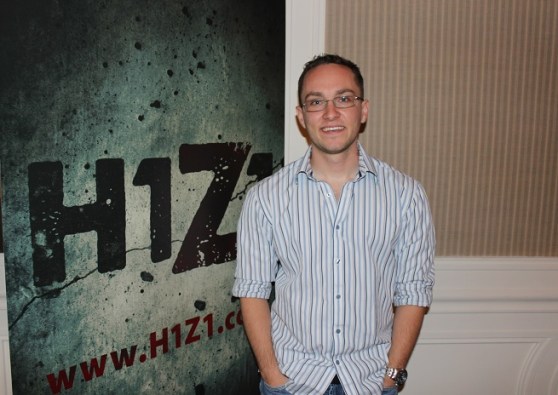 Above: Jimmy Whisenhunt of Sony Online Entertainment, the maker of H1Z1.

GamesBeat: Did you get a sense of how wide a reach you got out of that, how many people you heard from?

Whisenhunt: It was mind-blowing. It was really surprising. I couldn’t use my phone for a good hour, because of Twitter notifications. I didn’t expect it. It was really cool. It spread like wildfire. We’re happy with the way it worked out. The chat was going so fast that we had to slow it down, and we still couldn’t keep up with it. We had to say we’d only respond to questions through Twitter, because the chat was just way too fast.

GamesBeat: The medium has to keep up with the size of the crowd.

Whisenhunt: Yeah. We stream on Twitch, we watch there, and we said, “OK, try tweeting to a hashtag so we can sort through things.”

GamesBeat: How long had you worked on it to that point?

Whisenhunt: It’s kind of hard to say. This team came together — I was on PlanetSide 2. Then this idea came up. It’s hard to say. We looked at a lot of different ideas. The team’s been growing for a while now.

GamesBeat: Was it a matter of months, or were you active for more than a year or so before you went to Twitch?

Whisenhunt: Really active development started — it’s been months as far as the full-on development. We’d been working on the idea for a while, though, just concepting everything out while the team was growing a little bit. 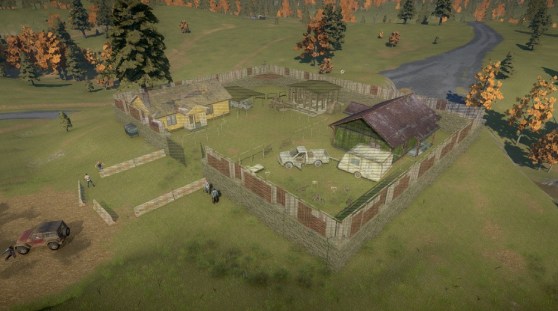 Above: Fending off the undead in a fort in H1Z1

GamesBeat: Do you think that you would have as much player creation in this game as you’re trying to do with Landmark, or are you stopping short of that same — is it a game that’s being designed, as opposed to a player-created game?

Whisenhunt: It is a little different. We’re not using the voxel tech. Players will be able to affect the world and craft things, but within more boundaries in our game. They won’t be able to blow up terrain and stuff like you can in Landmark, but that’s imperative to our game. There needs to be a certain rule set there, so players can interact in a somewhat predictable way. It’s still going to be pretty unpredictable. But players can build houses. They’ll be able to take down a whole forest if they want to. They’ll be able to barricade up a house. That sort of thing.

GamesBeat: How did you decide how much resource to put in the game for players? How much stuff lying around?

Whisenhunt: It’s a constant tuning process. We want it to be scarce, but that depends on how the players react, how quickly they find things. We’ll dial it back or push it forward. We know that we want it to be scarce, as far as resources like trees and things. We have a lot of self-containing systems. Once again, wolves will kill deer and so on. We just push forward and dial back that number as we need to. It’s going to be a little rough to find some of these things, which is a big part of the driving force of each play session.

GamesBeat: What if I say I’m not going to play unless I can spawn in as a Call of Duty super-soldier?

Whisenhunt: This game’s probably not for you, then. You can get there eventually.

GamesBeat: This is a free-to-play title, right?

Whisenhunt: Yeah. Initially we’re going to Steam Early Access, though, and that will cost a bit.