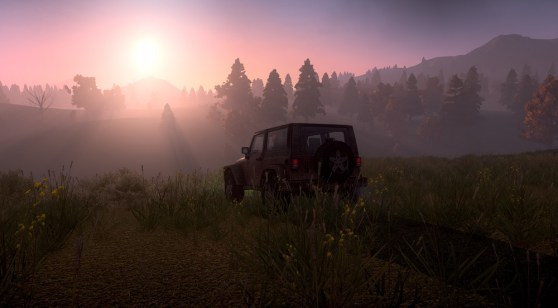 Above: Sunsets are pretty in H1Z1.

GamesBeat: Have you figured out what people could buy, then? What’s appropriate versus what people would get mad about if you could buy your way forward?

Whisenhunt: We’ve had some heated debates over it. We went to the community and said, “What do you guys see that doesn’t affect the hardcore aspect of the game?” We have our own ideas there. We’re looking at things like cosmetics, or the possibility of a game mode that players would want on top of it. We’ve looked at anything that doesn’t affect your ability to survive. We don’t want to sell food or bullets, or even clothes. They might have cosmetics, but they’re not going to make you warmer if it’s cold. They’re not going to save you.

GamesBeat: You start with exactly what is in your hands?

Whisenhunt: You start out with your fists. You can go box some zombies if you want to. You also get an axe and a torch right now. We’re playing with the idea of removing the torch, because we find that players just set everyone on fire. You maybe shouldn’t be able to do that the second you get into the game. But it’s a limited set. It’s the tools you need to see, and the tools you need to start your crafting and defend yourself a bit.

GamesBeat: What are some players thinking as far as how much time it should take to build some of these things? Like a barricade or a weapon. Some people would get a kick out of that, I think, and some people might get bored.

Whisenhunt: There will be different tiered systems. If you get really good with a bow and arrow, it’s going to be relatively easy to craft that as opposed to a house. Maybe you’ll want to steal someone’s house, if you don’t feel like doing that work. You craft that bow, wait for a guy to peek out the window to see what the noise was, and then break down the front door and take his house.

But there will be multiple tiered systems. I don’t expect us to put a massive house in-game within the first couple days. People are going to take some times to build these larger things and affect the world in that way. But there will be plenty to do in between. We want to make sure that each time you log on, you progress your character in some way. You do feel better because you got that bow and arrow, or maybe you tried to make friends with a guy, he tried to kill you, and he had a bunch of stuff you needed. There will be a lot of ways around it.

GamesBeat: When players are getting together, what are you noticing? Are they forming clans or groups?

Whisenhunt: We’re not sure just yet. We’re going to Early Access here in the next three or five weeks, something like that. Beyond that, within the internal dev team, it’s funny, because this is the first actual game that we’ve had that was so hardcore like this. We have art directors banding together. I can hear them yelling across the office. So yeah, people are usually finding friends pretty quick. We already have villains in the office that people yell at after playtests.

GamesBeat: You can play around with the size of the groups, then? Will we have 25-person clans or 100-person clans, or not even very structured clans?

Whisenhunt: We have support from PlanetSide 2, which is exciting. PlanetSide 2, you could do squads all the way up to maybe six people, platoons up to 50, and then outfits — really, those numbers are arbitrary. We can tune those very easily. We’ll go into Early Access without putting any of that in a box and see how players band without the binding system of guilds and clans and all that. If they need it, we’ll turn that on for them.

GamesBeat: Can you gift things to other players? Like, say, give something to everyone in your group?

Whisenhunt: As far as the things you purchase? Yeah, we want to be able to do that for players, absolutely.

Above: A scene from the zombie apocalypse in H1Z1.

GamesBeat: How sophisticated are you expecting it to get? If someone’s been playing for a year, will they build a city or something like that?

Whisenhunt: It’s a possibility. They could just go nuts and have this massive town. They’ll have to be really dedicated, because it’s a shifting world. Not only in the way of, it’s raining, there’s fire, someone catches things on fire, zombies try to tear it down — if they manage to do that, that’s awesome. I hope someone does it, because then they become the target of the whole server. Let’s take them down now.

GamesBeat: At any given time, are there 10 zombies for every human, or something like that?

GamesBeat: It sounds like it’s going to be fun when there’s large groups, or lots of things to do. At the outset, does it seem like it’s the pioneers that are going to have fun, as opposed to — you can’t just walk into a vibrant zombie world, I guess.

Whisenhunt: Yeah, groups, large groups — in beta we’ll figure out what players are going to do. One thing we’re very much into is consequence. If you do have friends, that’ll help you out. But if you get that group up to 20 people, you guys make a lot of noise and you all need a lot of food. I have a feeling some people might manipulate other people into backstabbing and taking each other’s food. It might trim the group size a little bit. But that’ll be fun.

GamesBeat: The zombies are drawn to all that noise, then?

Whisenhunt: Yeah, very much so. The larger a group you have, you have to chop down more trees, hunt more animals, make more noise to do that. The zombies will notice and come to you guys. You need to be careful.

GamesBeat: What would make this really successful from your point of view?

Whisenhunt: Scale. One of the biggest things for us is, we love this game. We are really excited for it. Seeing what we can do with our engine — most of us worked on PlanetSide 2. We’ve seen what we’ve been able to do with it. Knowing the features that we can turn on to be able to handle the number of players, to handle this massive combat — we’ve been seeing how many zombies we can put in the game. It’s unparalleled. It’s going to be awesome.

GamesBeat: Are you going to try to tell a story here, too?

Whisenhunt: It’s going to be a more passive story. As you run around, you’ll kind of see how things happened. You see a wrecked car sitting there, right? Maybe the wrecked car went off a bridge. Why did the car go off the bridge? You go down the road a bit more, maybe you see there was a camp there and they were trying to escape. We’ll tell stories through the way the world is built. 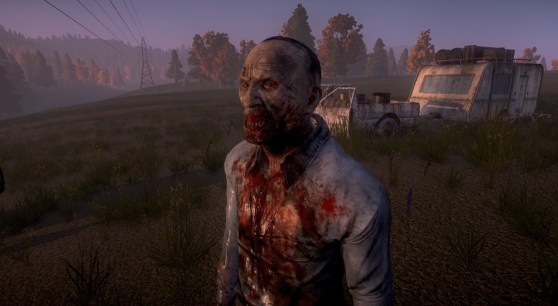