Go on. Surprise me.

The Electronic Entertainment Expo shows journalists and retailers future products and games before they’re released to the general public. Most of us, however, really pay attention to the event because we’re hoping for a monumental, game-changing surprise.

This year’s E3 is only a couple of weeks away. Who knows what we’ll see, but we figured this would be a good time to look back at some of the biggest shockers E3 has given us so far. 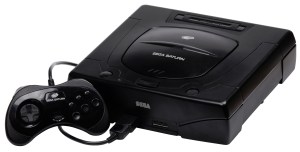 The first E3 was in May 1995, and it didn’t take long for the event to get its first moment. Sega’s upcoming system, the Saturn, was launching in the U.S. on Sept. 2 (adorably dubbed “Saturnday”). However, Sega announced at E3 that the Saturn was out immediately at select retailers, months ahead of schedule.

Sega did this to get a jump on Sony’s upcoming PlayStation, which was also coming out that September. While the move did generate a lot of buzz, it mostly backfired. Sega didn’t have enough games ready for the surprise launch, and retailers (like KB Toys) that didn’t get any consoles got angry and refused to stock Sega products.

Sony shocks us with a cheap PlayStation

Sony responded to the Saturn surprise that E3 with a shocker of its own. The Saturn launched at a hefty $400. So how would Sony respond to Sega’s early release? During its event at E3, all it need was one mic drop: $300.

That hundred dollars made a huge difference. The Saturn never caught on, but the PlayStation was a huge success. In fact, the PlayStation brand still exists today, with the PlayStation 4 currently making a big splash since its launch last November. Sega, however, is now out of the hardware business. That first E3 was the start of a huge shift in the industry.

Sony shocks us with an expensive PlayStation 3

Of course, not all of Sony’s E3 moments were as brilliant. In 2006, it showed off the PlayStation 3. After the original PlayStation and record-breaking PlayStation 2 built up tons of goodwill toward Sony’s gaming brand, how could anything go wrong?

The reveal, however, was a bit of a disaster. The game demos were boring, Sony tacked on unnecessary motion controls in response to Nintendo’s Wii, and host Kaz Hirai, the president and chief executive officer of Sony Computer Entertainment America, had the charisma of a potted plant. However, the worst part came when Sony announced the PlayStation 3’s $600 price, an astronomical amount for a system at that time. By comparison, the most expensive version of the Xbox 360, which launched a year prior, was $400. Everyone wondered, “What is Sony thinking?”

The PlayStation 3 would eventually recover from this rocky start, but it’s definitely an E3 moment Sony would rather not remember. Still, at least we got a few memes out of it.

It almost seems ludicrous now that this would be a big surprise, but it was a different world in 2006. A lot of the franchises we take for granted as multiplatform today, like Final Fantasy and Tomb Raider, were generally exclusive to PlayStation systems.

Microsoft executive Peter Moore, however, shocked everyone when he revealed a Grand Theft Auto IV tattoo on his arm during E3 2006. The guaranteed blockbuster was coming to the Xbox 360 the same day it would hit the PlayStation 3. Eventually, Final Fantasy and other once-exclusive franchises followed. These days, it’s rare to see a system exclusive that isn’t a first-party release.

Before the Kinect became a point of controversy with the Xbox One, Microsoft wowed attendees at E3 2009 by revealing Project Natal, a motion-tracking camera that eventually became the Kinect. The reveal looked incredible. People were playing games without controllers and with perfect responsiveness. The camera even took pictures of a guy’s real skateboard and put it in a game!

Of course, the introduction oversold the final Kinect’s capabilities, but Project Natal generated a lot of buzz. Finally, someone had found a response to the Wii. Hell, this could be the future of gaming. Of course, it didn’t turn out that way, but it was shocking to see such seemingly futuristic technology at the time.

Do you have your own favorite surprises from E3’s history? Please share them!