To understand what makes it special, I spoke with developer Night Light Interactive, which is releasing the game today, first on Ouya, and June 17 for PC, Mac, and Linux (via Steam). You play as Elena, a young girl with supernatural powers who searches haunted mansion grounds for her missing father. And if you think you’ve played that game before, just wait.

Whispering Willows didn’t start out as an animated game. In fact, given the story behind it, you’d think the team would opt to re-create its settings realistically, as from a photograph. According to founder David Logan, several members of the Los Angeles-based studio went to college together at Chico State in Northern California, and the local, haunted Victorian mansion of John Bidwell served as the inspiration for its overall direction. 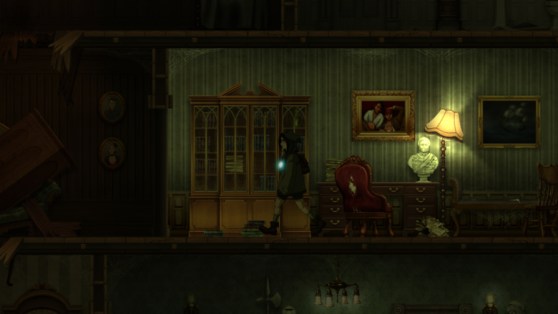 Above: The old houses in Whispering Willows are so detailed, you can almost hear them creaking.

Logan said that instead, Night Light wanted to capture the spirit of a point-and-click adventure but with a modern twist. Recent indies like Lone Survivor, Don’t Starve, and even Thomas Was Alone were references.

“We wanted to create an immersive style that created a certain eerie-esque feel yet was uniquely different from most horror games,” Logan said. “Whispering Willows certainly fits atmospheric horror, but it lacks the visual elements of a typical jump-scare game. As the visual design of the game tends to be the first thing that draws players into an experience, we wanted to create something beautiful and enchanting but equally horrifying.”

A lot of games have ghosts, but you rarely become one in them. With an Exorcist-like shudder and the help of her magical amulet, Elena can exit her body and move around as an astral spirit to reach new areas and possess objects like switches or keys. Each form can compensate for the other’s weaknesses. 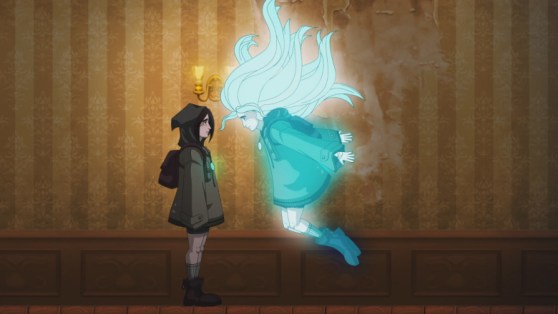 Above: Players immediately have the ability to switch between Elena’s two forms at will.

Logan told me that originally, the main character was just supposed to be a ghost. It even considered making two protagonists: one ghost and one human.

“In the end, having both characters be two sides of the same coin made the game more interesting in terms of both gameplay and story,” said Logan. “As a human, Elena tends to have a much more introverted personality, which is reflected in her character design and confused storyline. Her counterpart, the spirit form of Elena, is much more [extroverted], with her wild hair and strong desire to find her missing father.”

“I think anyone, no matter what gender, at the age of 13 would be terrified of a haunted mansion filled with the restless undead,” said Logan. “However, our decision in picking a female lead wasn’t necessarily a whim. 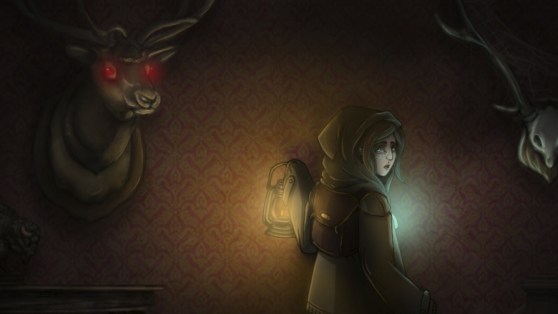 Above: Elena’s adventure is as much about personal growth as it is about finding her father.

“In an industry that’s had its share of issues with sexism and oversexualization of male and female characters, we wanted to make a character who would defy common archetypes. Given that and the growing number of female gamers who have expressed an interest in this genre, we created Elena as a relatable character who would develop with the player throughout the game.”

While Elena is innocent and scared at the beginning, Logan said that as she uncovers more secrets and explores her surroundings, she becomes braver and more assured.

Whispering Willows contains zero fighting. None. And while games like Outlast do the same, they always force you to flee from your pursuers. Night Light’s game is more about solving a mystery and confronting your fears head-on. 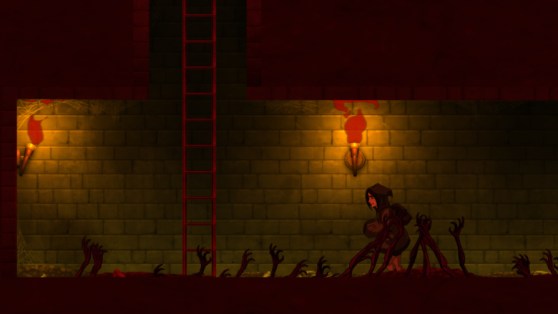 Above: One of my favorite scenes. Sometimes surviving means facing your fears and pushing forward.

“There is no combat in the game,” said Logan. “We did this to force the player to outwit and outmaneuver creatures by dodging or blocking by means of careful timing and thinking outside the box.”

Interaction with these evil beings is limited in favor of a narrative experience. Throughout the game, you run into some friendly ghosts who are simply searching for answers or something they lost, and it’s your job to help them.

An emotional, not gory, story

Whispering Willows doesn’t aim to scare you with disturbing monsters or piles of blood and gore. It’s an adventure full of human stories, and Night Light believes that makes it more digestible to a broader audience of horror and non-horror fans alike.

“I think it’s important for any medium to have many subgenres that cater to different types of fans,” said Logan. “That being said, I feel like creating content that tends to be overly offensive and over-the-top will likely limit your audience. 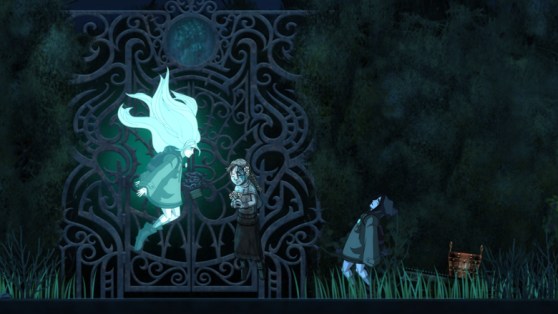 Above: Some spirits are innocuous and merely need your help to cross over.

“While many horror game enthusiasts enjoy the sinking feeling at the pit of their stomachs or that edge-of-your-seat suspense, they may not, in fact, enjoy the genre of gross horror. Not to say that people can’t enjoy gore-esque horror but, for our choice in game design, we wanted the player to feel a different sense of horror and emotional turmoil.”

In other words, if you’re scarred enough from playing games like Amnesia, Whispering Willows won’t add to your trauma.