The Internet is a big, big, big place.

In the 200 seconds I watched the “Internet in real-time” infographic, Google ran almost a million searches and sucked up over $300,000 in revenue. Facebook users uploaded over a terabyte of data, liked something over 10.5 million times, and posted 11 million items.

People watched 78,385 hours of Netflix content, and Android users downloaded over 250,000 apps. Amazon shoppers spent over a half a million dollars, and 690 million emails were sent.

Here’s the live infographic, go get mesmerized for a minute or two.

Oh, and in the time it took me to write this very short story, over 13 million gigabytes of data was transferred of the millions of wires, fibers, servers, and switches that make up the internet. 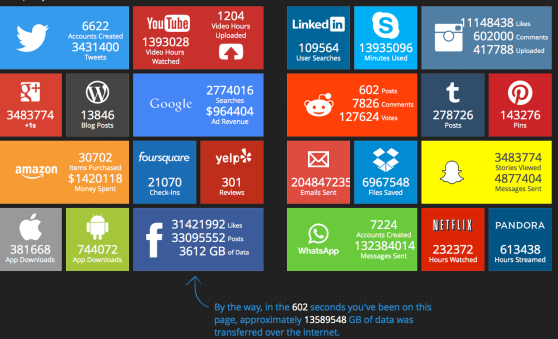