How do you go from nowhere to 25 million pageviews in about four months?

If you’re Mobio Insider, you do it by partnering with celebrities like Kim Kardashian, soccer star Cristiano Ronaldo, model/actress Pamela Anderson, and dozens of other celebs, including approximately half the Kardashian clan. 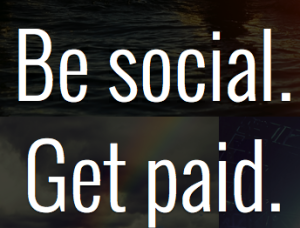 Above: Mobio’s message on its “Get Paid” landing page for minor online celebrities.

“70-80 percent of all social media traffic is celebrity driven,” Mobio CEO Mark Binns told me recently. “We  looked at the social media space a year ago and saw a huge opportunity.”

Not only did celebrities drive massive traffic, they also don’t get paid for the in-effect-promotional work they do. Twitter, Facebook, and Instagram provide a platform for celebrities to connect with fans and build a bigger audience, but they also profit from that attention and use and don’t share any of it. Even worse, from Binns’ point of view, platforms like Facebook are now not even allowing social stars — or brands — to reach all of the audience that they’ve built up, as EdgeRank gets more sophisticated at tailoring exactly what you see in your stream.

“Celebrities are getting ripped off,” Binns says.

So he set out to build a platform that not only helped celebs connect with fans but paid them for their involvement. In other words, a star-driven social media platform that uses all the other social platforms as marketing channels. When celebs post on Mobio, they can link out to Twitter and Facebook, much as Instagram used to auto-update — with full images — back to Twitter. Via Mobio, fans can request specific content and upvote popular requests, which helps celebs know what their fans want.

Above: Mobio is reaching out to its community to offer its revshare version

But how does a virtually unknown platform establish relationships with dozens of celebs? According to Binns, the first 50 celebs took only 100-150 phone calls to close.

“It’s easy — we did it before we even had a platform,” he told me. “You can look up any celeb you want, including who manages them — IMDB has a great database. You find out who’s their agent, who’s their manager, and just call them. Then we simply say ‘We’re rev-sharing all the partners we’re bringing in, it’s a 50/50 rev split … want to try it?’ The answer was usually yes.”

That focus on stars led to Mobio Insider’s quick growth: five million unique visitors within four months, 600,000 fan requests to celebrities, and 25 million pageviews. It remains to be seen, of course, if that quick growth will translate into long-term health of the platform — and profitability. Those five million uniques only translated into 200,000 registered users, and some celebs are not posting regularly via Mobio.

In fact, Kim Kardashian’s last post was two months ago: a “love you too!” response to a rather pathetic “please notice me” from a fan. And Mobio’s traffic as measured by Compete — an admittedly imperfect service — shows a dip after skyrocketing in the early part of this year. 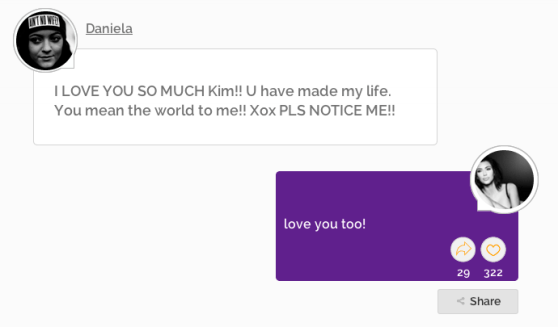 But Binn’s vision extends beyond paying celebs for posting. In fact, Mobio wants to pay everyone.

“That’s where this is going: Everyone should be getting paid for using social media,” Binns says. “There are tons of people with 25,000 followers on Twitter. They should be able to take advantage of this the same way Slash is.”

So Mobio recently released its Influencer program, with a “Get Paid” landing page where the company will ask you to sign in via Twitter. It will analyze your account for activity, followers, and engagement. If you qualify, Mobio will set you up with your own account to start making money off the interest you generate. If you don’t (with just under 9,000 followers, I didn’t), you’ll just have to wait a few months. 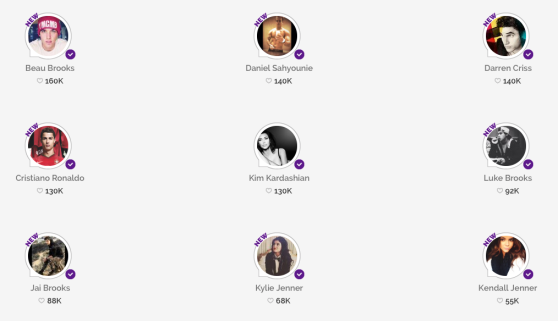 Above: Social stars on Mobio

In the third quarter of this year, the company is opening the floodgates to anyone who wants to try to monetize their following.

“That’s our vision: everyone gets paid for using social media,” Binns says. “As soon as that’s done, all seven billion people on the planet can come in.”

Mobio Insider is a Vancouver-based startup with 11 employees. It has funding from LX Ventures.