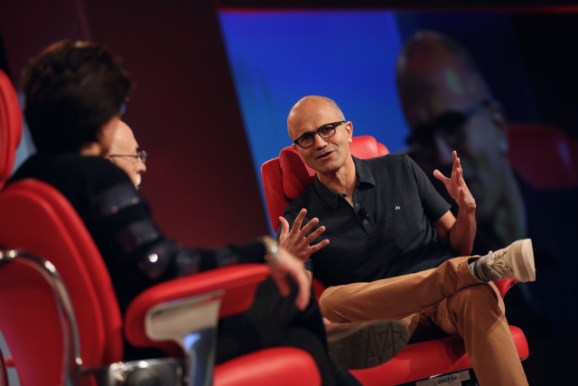 While taking questions from Re/code’s Walt Mossberg and Kara Swisher, Nadella pointed to the strengths of properties like Bing, Xbox, Azure, Office, Skype, and Nokia, while at the same time acknowledging that the 100,000-person company must do things differently going forward if it intends to win battles against the likes of Apple and Google.

Rather than saying that this is a cloud-first, mobile first world — as he has pointed out during multiple appearances in recent months — Nadella declared that things have moved into the “post-post-PC era.” And while hardware has its place at Microsoft, the company seems to be more focused on software.

“We are a software company at the end of the day,” Nadella said.

And increasingly smart use of data should play a big role in the creation of whole new experiences for consumers and businesses.

“The currency is data,” he said.

Nadella even took time out of the interview to demonstrate a Skype function coming later this year in which the software translates words on the fly from one language into another and back.

“This is about being able to create a learning system that improves with data. It’s like search,” he said.

But the talk wasn’t all about software. The forthcoming Surface Pro 3 is “promising,” Nadella said, even if the company’s track record in tablets has proven less than stellar. Microsoft’s Surface RT’s lackluster sales resulted in a $900 million write-down last year.

And it took years for Microsoft to carry out on its Tablet PC concepts from the early 2000s.

“On the tablet side, I really wish we had taken the bet all the way,” Nadella said.

Take Xbox. There’s a reason it will remain a Microsoft property for games and other applications.

“I have no intent to do anything different with Xbox than we are doing today,” Nadella said.

And as for buying into the phone business with last year’s Nokia deal, the move ultimately could be help Microsoft devise better mobile experiences across manufacturers.

“For me, hardware is a means to an end and not an end itself,” he said.

More broadly, though, Nadella has been thinking more about people than devices or even applications. “Instead of thinking about an app and a device, how do we build platforms that are about people and not devices?” he asked.

In the end, Nadella did not appear to believe the company was done coming up with products and services.