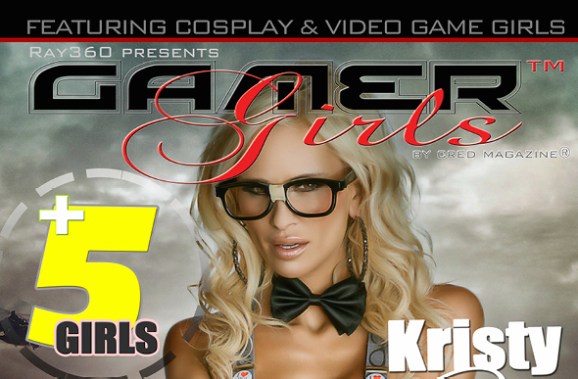 [Images in this story are not suitable for work. -Ed.]

Ray360 wants his fans and critics of Gamer Girls Magazine to know one thing: No models were harmed or exploited in the making of this publication.

In fact, the publisher told GamesBeat that the models had total autonomy in the process. They hired their own photographers to photograph them in whatever clothing and poses they wanted, and Ray360 just did the interviews and put the whole thing together.

Ray360, who declined to give his real name or provide a photo because he said he was in the Witness Protection Program, tells us that he brings 10 years of digital and print publishing experience to the pages of Gamer Girls. His third magazine franchise came under fire from gaming blogs and websites for its alleged misogyny and dishonesty. One such condemnation from Canadian Online Gamers even made it to the top of N4G, a video game news aggregator that ranks stories from around the gaming universe on a temperature scale according to views, comments, and other factors. However, Ray360 believes that future issues will quiet the objections of serious video game fans.

Digital and print versions of the first issue launched May 3. It featured photo spreads and interviews with five models. These interview questions ranged from general background information and word association to questions on the model’s perfect man and favorite superhero.

Each interview also includes a “stats” section, which lists the model’s height; bust, waist, and hip measurements; and a score of her “swag level” and sex drive on a scale of 1-10. The models also teach readers about Gamer Girl Magazine‘s five essentials to gaming: technique, coordination, control, styling, and playtime.

The first installment also features a review of the Amazon Fire TV media player to the right of one of the interview pages.

We spoke to Ray360 on the phone and asked him about the response his magazine received, the gaming history of its models, and the future of the Gamer Girls. 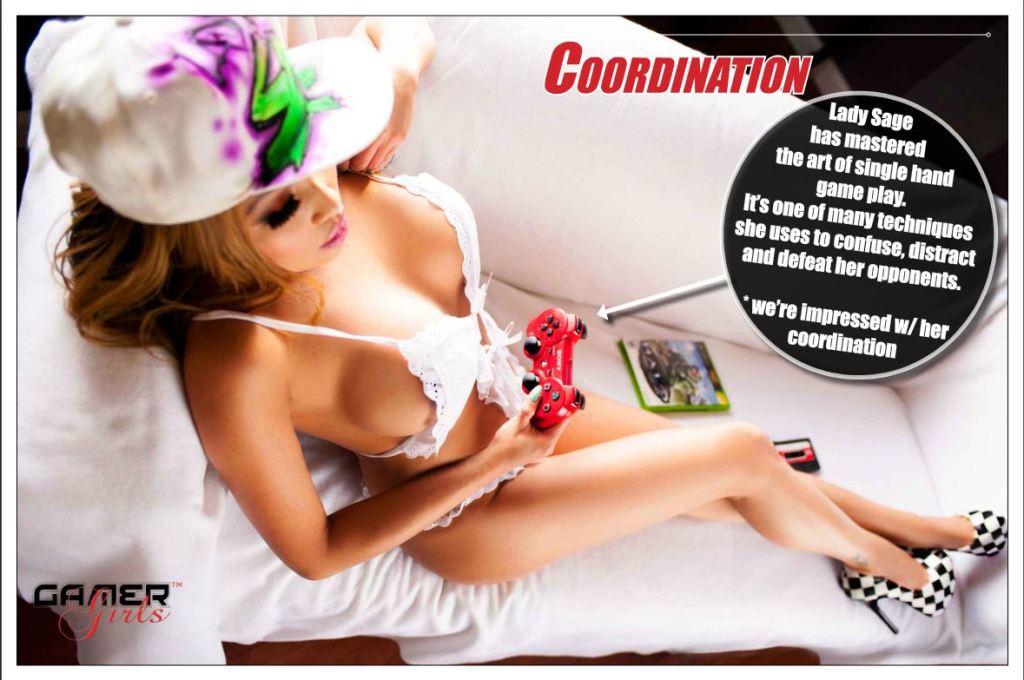 Above: The coordination gaming essential.

GamesBeat: What is Gamer Girls Magazine?

Ray360: Gamer Girls Magazine is just another editorial/pictorial magazine that I created. We came up with the concept for it about six months ago. We wanted to feature girls that were playing video games and girls that were into cosplay.

The first issue didn’t really get the whole concept executed the way I wanted it to. I felt like — since it had been six months — I just wanted to get it out there and see how the public would react to it. And it’s definitely been a good reaction.

Gamer Girls is doing great internationally. We have print orders going out to places like Sweden, Germany, Poland, and Italy.

It seems like people all over are really interested in this magazine. It’s still kind of crazy to me that so many people are interested in what it is.

GamesBeat: Why did you create Gamer Girls? Why did you feel like it was something people wanted?

Ray360: This was actually supposed to be just one issue in Cred: Xtra [one of Ray360’s other magazines]. We always come up with different themes to get the talent excited about dressing up.

About four months ago, we came up with the idea to do something with video games because a lot of the girls I know that model do like video games. We put a few ads out there, and the response was overwhelming. I got hundreds of emails from women who wanted to be featured in the gaming issue.

Once we started putting it together, I realized this idea was too big for just one issue. I see this as an entirely new idea that can expand into cosplay, include the characters in video games, as well as getting more in-depth with gaming.

GamesBeat: So you knew a lot of models that play video games? How did the selection process work? Can women apply for future issues?

Ray 360: For the very first issue, a lot of the photographers that I knew in the business actually sent in pictures based on the specifications we had for the magazine. That’s how we selected the five girls in the first issue.

Then, it’s so funny — after the mag came out, I got literally hundreds of emails from women who are gamers and want to be featured in this publication. They can contact us through the Gamer Girls website and send submissions in.

As far as what we’re going to be looking for in the future, you know — just sexy girls that are actual gamers and like to have fun.

GamesBeat: On that note, what kinds of games did the models play? 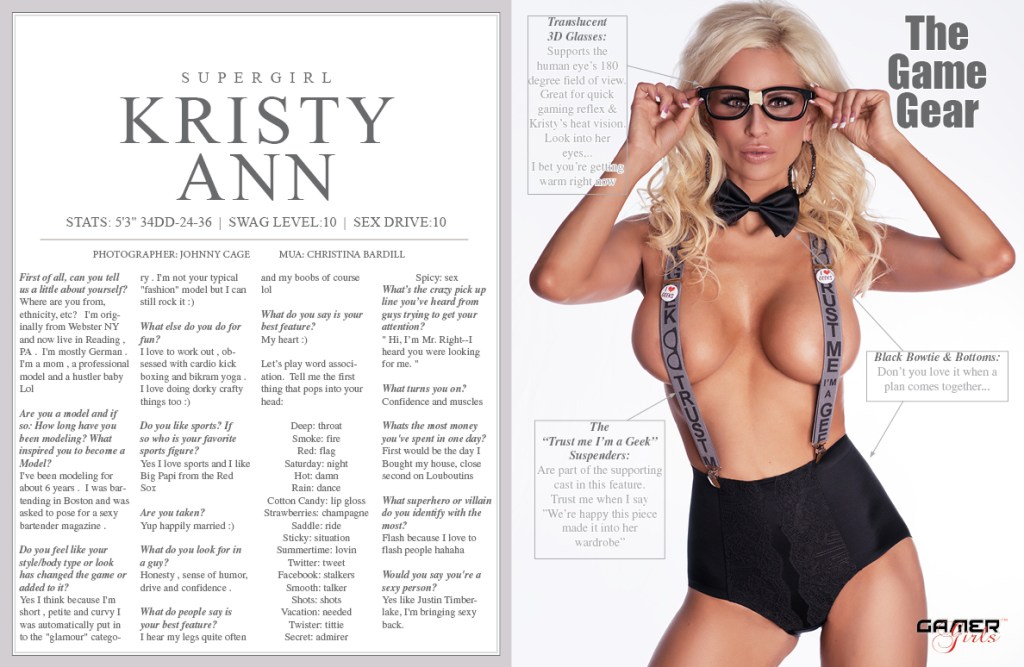 Above: The cover interview.

There were five girls, and only three of them were really into games. The other two — they play games on their iPhones or iPad or some other device. Maybe they weren’t as into games as the more hardcore gamers.

The funny thing about it is that the girls that are contacting me now — some of them are actually game developers and game testers. And they are professional models as well. I have to say that the next few issues are really going to be something to see.

GamesBeat: That’s really interesting. Do you know which companies they work for or have any specifics on them?

Ray360: One particular girl out of Atlanta, Shannon Chase, happens to be a game developer and tester for Nightingale Games.

GamesBeat: Based on your answers, it sounds like you have previous experience in the publishing/photography business. What exactly is your background?

Ray360: Back in 2003, I created dcmusicandmodels.com, which was basically an indie music and models website that developed into a TV show that aired on the Comcast channels out here in Washington D.C. for about three years.

It was during that time that I developed a magazine called Cred Magazine, which basically featured the same model-and-music theme. That’s pretty much been the theme throughout my career in the entertainment circle.

GamesBeat: Are you a gamer?

Ray360: Oh yeah man; I am a gamer from way back in the day. I used to play a lot of first-person shooter games. I’m not really into MMOs much.

Right now, I am more into PC games than console games. I am a big Need for Speed fan. I think the last game I bought was Need for Speed: The Run. The kids are scared when I play first-person shooters in the house, so I just stick to racing games.

GamesBeat: When can we expect the next Gamer Girls Magazine?

Ray360: We’re looking at at least four total issues this year. The first one was really a test to see how people responded and what we needed to do. You’ll probably see another issue in early August. Then we will finish out the year with another two issues. 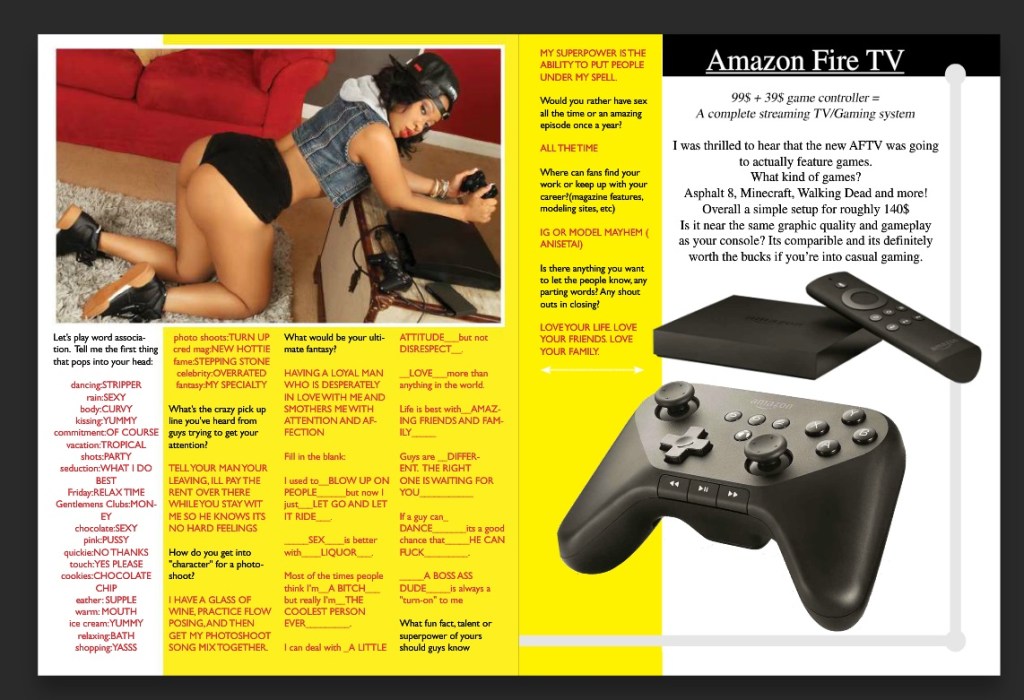 Above: The review of the Amazon Fire TV.

GamesBeat: It might be difficult to estimate so early on, but do you have any ballpark sales numbers for the magazine so far?

Ray360: I probably won’t have the metrics on sales until the end of the month, but I can tell you that my other site [Cred Magazine], which also has the Gamer Girls site listed on there, got about 8,000-9,000 hits just on the Gamer Girls section for two or three days in a row.

GamesBeat: Were those the first few days after the launch?

Ray360: I actually saw a peak of interest between May 12 and May 16. Everybody wanted to know what it was all about.

GamesBeat: Do you feel like Gamer Girls objectifies women? Why or why not?

Ray360: That’s the society that we live in right now. When you come up with a product that uses women to sell the product or has women in it — especially in swimsuits, bikinis, lingerie, or anything other than fully clothed — people say it’s objectifying women.

Honestly, the response from women who are gamers has been overwhelming. Like I said before, I have hundreds of emails from women who want to be in the magazine.

I look at it objectively. I like women. I like to look at women. The type of pictures that we have in the magazine aren’t overtly sexual.

The images featured in the first issue were all submitted by the models, who hired their own photographers to execute the theme. They did the styling and poses — it was their choice on how they wanted to be portrayed in the images.

Everyone has their opinion, but I don’t believe that this is a publication that showcases women in any way that isn’t a positive light. They’re sexy. They’re beautiful. And they love to play games.

GamesBeat: What’s next for Gamer Girls?

Ray360: As far as what’s coming down the pike for Gamer Girls, you are going to see a lot more editorials and pictorials of the models actually playing the games and getting into cosplay.

You are also going to see some things as far as actual gaming, like possible reviews of old, classic games and the latest hardware.

The focus of the magazine was never intended to be for a hardcore gaming person. This was a magazine that was geared to a specific demographic, which is guys that like girls and video games.

GamesBeat: Are there any final statements you would like to make?

Ray360: I just want to say thank you to everyone who is actually interested in the magazine. It got a lot of mixed reviews, but I can tell that the fans of the magazine are definitely going to be pleased with the very next issue and the issues after that.

We’ll probably be appealing more to people that are hardcore gamers. We are going to be getting articles written by those developers and game testers as well. These are women who are models and are involved in the gaming industry.

GamesBeat: Just to clarify: The gaming industry models are going to write the reviews themselves?