That will lead to more fretting over the rising cost of user acquisition, which takes its toll on free-to-play game and app developers because marketing costs are outstripping app revenues. But if you look at the chart below, you’ll see that mobile app costs are bouncing all over the place. The general trend is up, but there are some slower months where the marketing costs can drop.

Fiksu said its latest index showed that small and mid-sized app publishers spent more money than in March. Meanwhile, the app store competitive index, which measures download volumes among the top 200 apps, dropped 25 percent to 5.34 million from 7.1 million in the U.S. in March. 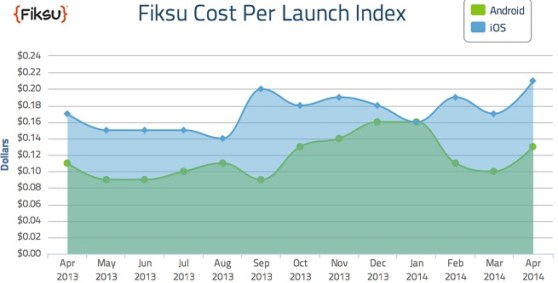 Above: Fiksu cost per launch index

A surge of big brand spending dropped off after the first quarter. That meant the higher costs that smaller app and game makers are paying played a larger role in April’s indices. Fiksu’s cost per loyal user (where a loyal user is one that opens an app at least three times) rose 5 percent to $1.52 in April, while the cost per launch increased 30 percent to 13 cents for Android and 20 percent to 21 cents for iOS.

The cost per install index (CPI), which measures how much it costs to get an app download, also rose 21 percent for Android to $1.31 and 28 percent for iOS to $1.24. While the app store competitive index fell, it is not reflective of the broader app landscape. Rather, download volumes are being spread out across a wider set of apps than the 200 measured by the index. So the spread of the competition is becoming wider.

Also, smaller publishers tend to emphasize high-value users in their user acquisition campaigns. This leads to higher initial acquisition costs, which are later offset by better lifetime value (LTV) metrics, or the revenue generated by a user over a lifetime of using the app.

Fiksu has accumulated more than 270 billion app actions such as launches or registrations. 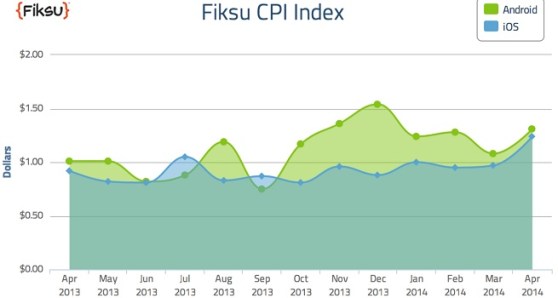