Developer Nowhere Studios’ physics puzzler Monochroma is out now to fill your PC, Mac, or Linux machine with two-toned dread and surprising tentacles. It tells a story of two brothers who witness a crime and must flee from their idyllic home on a farm to the mechanized and clinical steel and glass of a bleak city. You play as the older sibling, and the catch is that the younger kid is wounded and helpless, so you have to carry him through levels and make sure nothing terrible happens to him.

Our heroes will face tricky puzzles, scary villains, and startling revelations on their journey, and it’s up to you to get both of them through to safety. Comparisons with 2010’s spooky platformer Limbo are inevitable, but Monochroma earns them with its sharp visual style and cool environments.

Actually playing it kinda made me want to throw my Macbook through a window, however. But we’ll start with the good things. 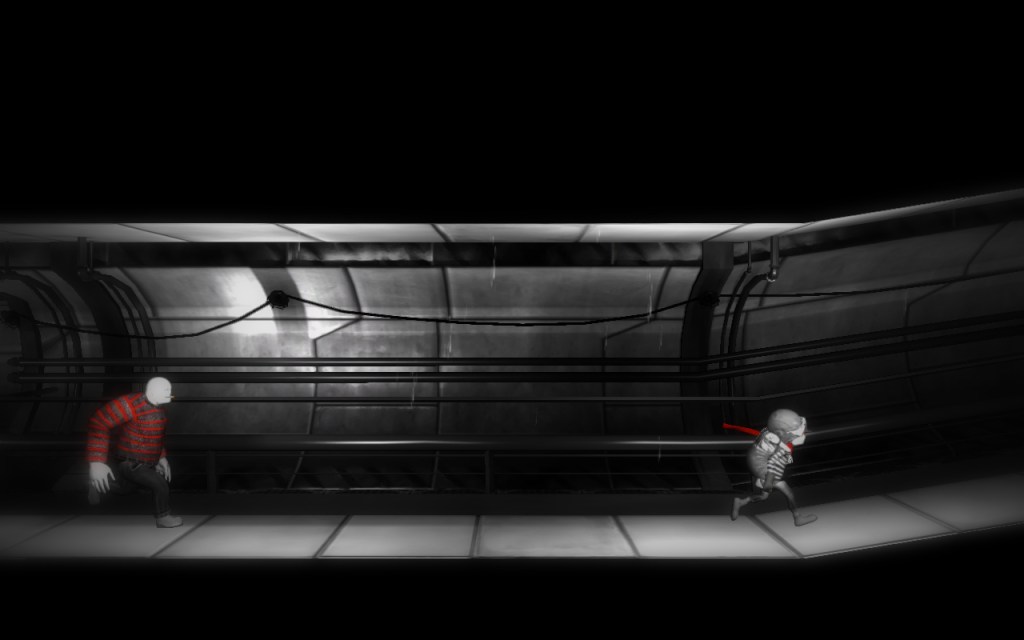 Above: You will learn to hate this man.

The visuals and atmosphere

Every screenshot of Monochroma is beautiful. Its black-and-white world with its red accents is striking and sets a great mood, and the music conveys loneliness, fear, and panic effectively.

The graphics earn their comparison with Limbo; the characters live in a cruel and bleak world, and the palette reflects that. Sure, several games have done the whole “black-and-white means hopelessness” visual trick before, but Monochroma also fills its gloomy environment with backdrops and settings that would look amazing in or out of color. 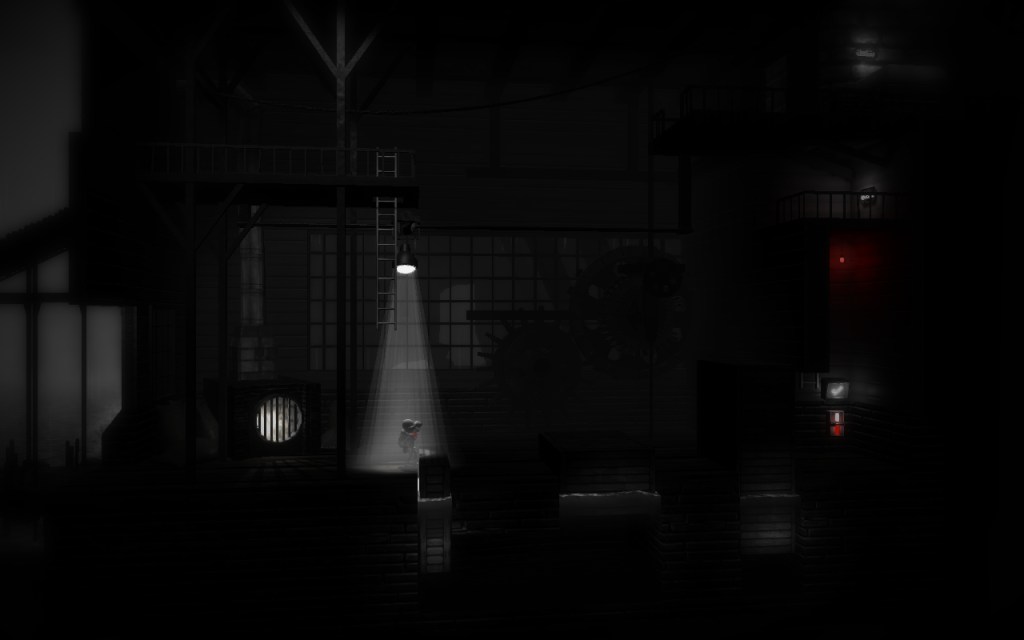 Above: The high-contrast lighting is usually pretty effective.

It’s difficult to work puzzles into a story in a way that makes sense. You either end up with a lot of rooms that scream, “This room is a puzzle,” or you run the risk of being overly vague.

Monochroma is mostly successful at integrating its obstacles into the world in a way that feels natural. It still has a few elevators with ridiculously inaccessible switches, but for the most part, placement and design don’t stand out or feel weird.

The puzzles themselves provide a reasonable amount of challenge without feeling too contrived or obscure, and they make good use of the impressive physics. Environmental objects feel like they have weight and substance, and even a simple task like swinging a crane-mounted hook to break a window feels satisfying and real.

I’m not talking about tone here. Sure, it’s not the happiest time in the world when these two young boys fall into whirring saw blades, drown, and/or burn to death. But I mean that this game is literally dark. By which I mean that it is so dark that it is nearly impossible to tell what’s going on and where things are most of the time.

And it wasn’t for lack of trying. I more or less played Monochroma in a lightless closet with both the game and my laptop’s brightness at maximum. Even with that ridiculous setup, I still relied on the fact that you can see everything way better when you pause the game. So I’d pause to figure out where everything was, and then I’d go back and jump on all the incredible platforms I hadn’t even known were there.

Even that wasn’t enough most of the time, however, and the poor visibility led to a lot of cheap deaths. Monochroma Blindness wasn’t the only culprit, though, because I also hated the next thing. 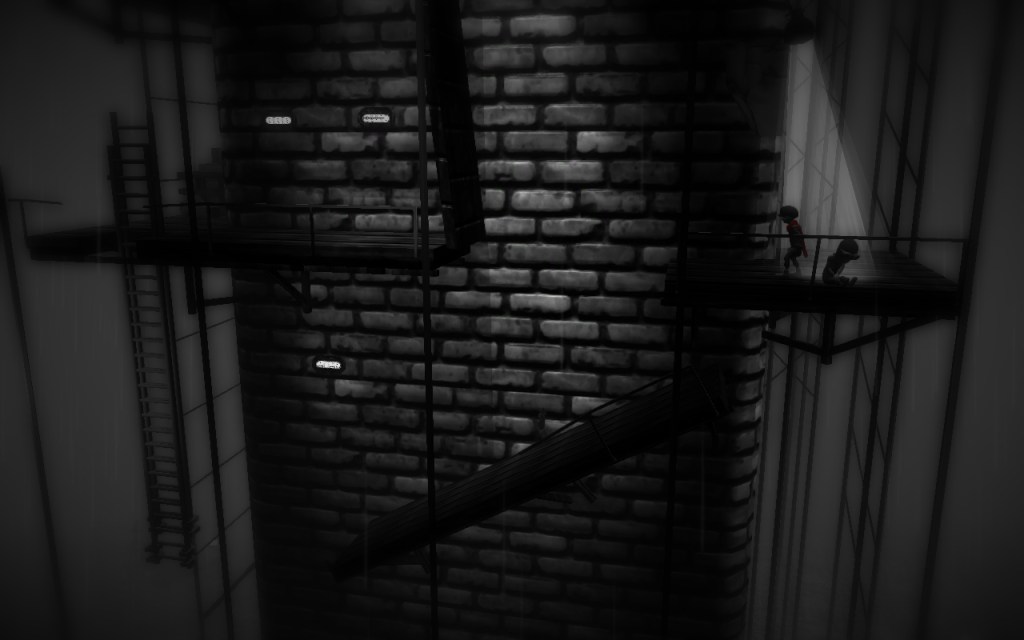 Above: You have to perfectly time your crappy jump to reach that ladder. This took me 47 tries.

I’ll put it plainly: Monochroma’s controls are bad. You’ll take two steps when you mean to take one, and then you’ll go flying off of a platform and die. Or you’ll push the jump button, and nothing will happen. Or, worst of all, you will push the jump button with timing that would work in any other game, and then your character will leap more or less straight up — for all its cool physics, your character has no feeling of momentum — and then a very large stone will crush your younger brother. And then you have to start over.

I had a few deaths that were because I pushed the wrong button or because my timing was off. I had far more deaths from the game misinterpreting my presses. Or I’d get stuck on a ladder. Or I’d just think I was stuck on a ladder, but I was actually stuck on a ledge because I couldn’t see a damn thing, and by the time I figured it out, that poor dumb kid had already fallen into those gears. 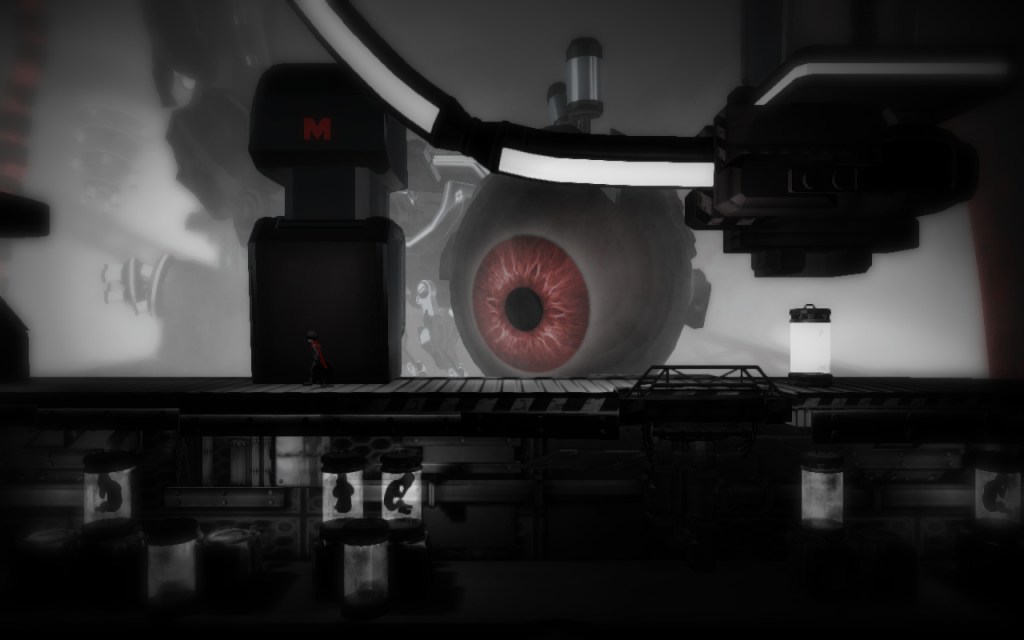 Above: I don’t know what the hell that thing is, but that was the least of my problems at the moment.

And what all these cheap deaths mean is that you will play the same things over and over. Puzzles with final solutions that take a minute to enact take 10 more minutes to actually figure out, and a lot of false starts and do-overs while you fight the controls and the occasionally cruel physics.

Here’s an example: In one room, I flipped a switch that caused water to start to fill up the place. I had a box, and I was supposed to drag it over and then float up while standing on top of it so that I could jump on a platform. Then, I had to wait for the box to rise high enough for me to drag it to the opposite side of the screen and then ride it up so that I could jump out of a window to the next area.

Once I figured all the steps out, I spent 30 minutes falling off of the box, missing jumps, getting onto the crate, and then having it roll me off into the water for reasons unknown to man or science. Or sometimes I just died, and I had no idea why. Each time, I had to start the entire process over, which makes sense until you think about how many different ways the game can rob you of success.

And it can dish out any one of them at any time because even the virtual world is a cruel and unforgiving place. 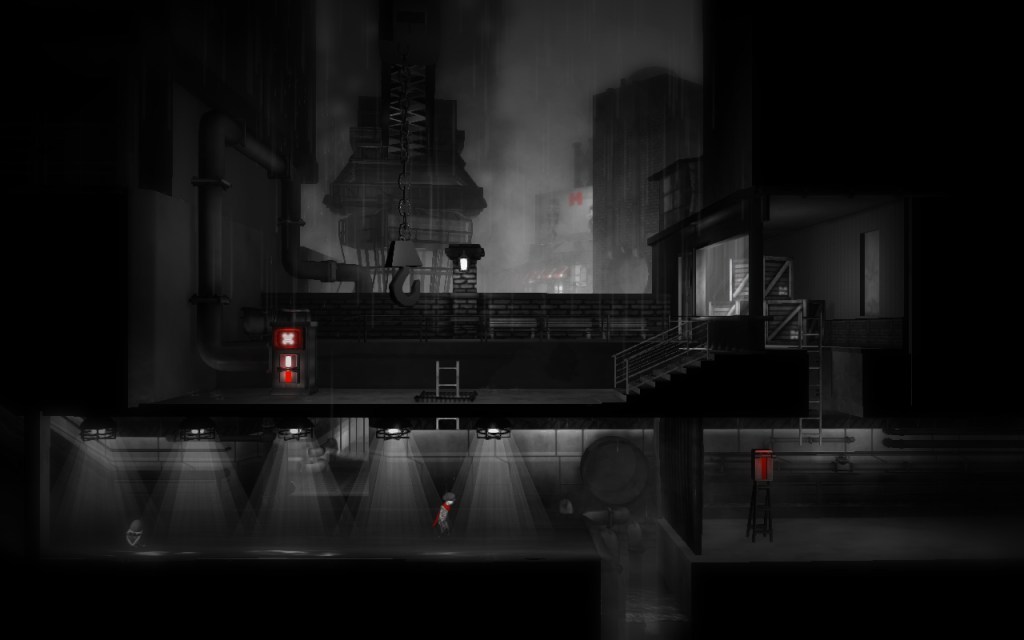 Above: Your little brother is happy to just sit there and let the current carry him over that drop. He could stand on one leg or something; meet me halfway here, dude.

I am not traditionally a controller-thrower or a yeller-at-screens type of guy. Monochroma proved to be the exception, except I had no controller to throw, so I just yelled twice as much. And I directed most of it at Little Brother.

The success of an escort mission in any game depends upon two things: the escortee showing any semblance of self-awareness or a self-preservation instinct and the player actually wanting to keep the escorted person alive. And when your entire game is an escort mission, those conditions become even more important.

Little Brother is an albatross. When you’re carrying him, you run slower and jump lower. You can put him down, but he only wants you to put him down where it’s light, and the pools of light that make him feel so safe are often on moving conveyor belts or directly beneath very large rocks.

And unless the thing he’s sitting on is moving, Little Brother will stay where you leave him. The game explains this by saying that he hurt his leg at the beginning, but I’m pretty sure if I were on a conveyor belt that put me in danger of cogs crushing me into axle grease, I’d find a way to play through the pain and scoot over a tad if it meant not dying horribly.

So much depends on you liking Little Brother and wanting to keep him safe, but he was always just a helpless and stupid burden to me. And since his only use in solving puzzles is in providing extra weight, I’m not clear why the game didn’t just have me walking around with a really cool rock with a smiley face painted on it.

Monochroma is beautiful and a pain to play. Its visuals are striking but murky, and it’s difficult to care about your dead-weight companion. It and its world have a lot of interesting ideas, but unfortunately, the shoddy controls and resulting frustration get in the way of really enjoying them.

Monochroma is out now for PC, Mac, and Linux. The developer provided GamesBeat with a free Mac download code for this review.