Bulking up on venture capital doesn’t always result in a happy payday down the line. It can actually lead to a less valuable exit, a new study from the research group Exitround finds.

Lots of startups talk about staying “lean and mean” capital-wise during scale-up, but the temptation to take on new investment can be tough to resist given the growing number of seed investors.

Exitround worked with some big-name startup accelerators (Y Combinator, Techstars, SoftTech VC, and others) to study the real connection between venture funding and exits of less than $100 million.

Startups that raised a total of $2-$3 million or $5-$10 million had the best return on investment, the study found. Companies that generate the top exits at this stage are on average at least four years old. 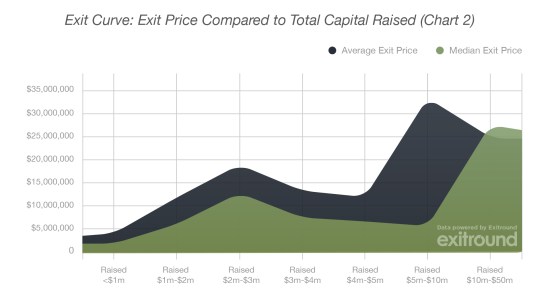 “Despite raising more capital, some companies had a lower average exit price. Somewhat counterintuitively, at this very early stage, companies doing better tend to raise less capital,” the report states. “. . . lean startups with small teams move quickly and build a product that takes off, so they often don’t need to raise more than that initial $1 million or $2 million–until they really grow and raise a much larger round.”

Exitround says tech startup mergers and acquisitions of less than $100 million comprise about 88 percent of all exits but are often misreported or not reported at all.