One by one, the big console games of 2014 are being postponed to 2015. This is the new way of building next-generation games. Announce a date. Build the game. Then figure out you were too optimistic and delay it until next year.

It seems that creating these titles is not as easy as the industry thought. We have been lucky enough to get Ubisoft’s Watch Dogs this week, only because it was originally scheduled for October 2013, and then it was delayed an extra seven months for polishing.

Then it was Halo 5. Microsoft announced it needed more time to tell the journey of Master Chief in the right way. Yesterday, Microsoft also delayed Quantum Break, the new intellectual property and TV show that is being built by Remedy Entertainment, the maker of Alan Wake, as an Xbox One exclusive. Sony announced last week that The Order: 1886, another brand new IP, was delayed until 2015. Ubisoft delayed its Tom Clancy’s The Division until 2015. And Valve just announced, sort of, that the Steam Machines, or PC-like living room machines with the Linux-based SteamOS, are going to be delayed until 2015. The Evil Within just lost a few months, falling back from August to October. And Chris Roberts’ Star Citizen has also been held back on the PC. 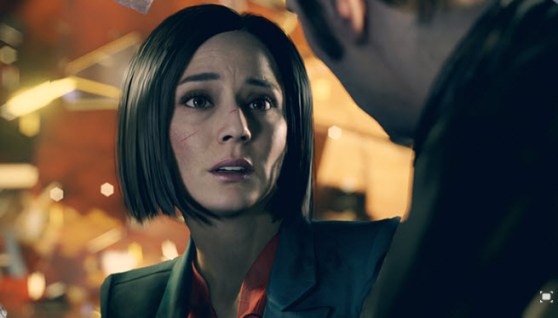 And let’s not even talk about Sony’s long-lost The Last Guardian. I’m glad that we haven’t heard about too many leaks about next-generation games, because it might be two or three winters before we see them playable. This generation of console games was supposed to be easier to make, because both Sony and Microsoft used the familiar x86-based AMD hardware that was familiar to game developers who knew how to make PC games. Instead, we’re seeing timetables stretch out.

What gives? The game industry is busy sorting through its slate of scheduled games for the year, since the Electronic Entertainment Expo, the trade show where all the big titles are announced, is approaching the week of June 8. By that time, the companies will have to fess up about whether they can really hit their expected timetables or not. We’ll still get our annual Call of Duty or Assassin’s Creed games. But I’m disappointed at the delays.

Of course, there is the installed base factor. The more game companies wait, the larger the installed base of next-generation machines. Once there is a big number of next-gen users, it’s more lucrative to launch a big game, said Joost van Dreunen, chief executive of Superdata Research. That creates a more steady flow of income later in the cycle. If you look at Grand Theft Auto V, it has sold 33 million-plus copies, or almost $2 billion worth, because it came at the end of previous cycle, when the installed base for PS3 and Xbox 360 consoles was at its peak.

On the other hand, it pays to launch a new IP early in a cycle, van Dreunen said. Then you can crank out a second or third in a series, with the audience growing with each new part of the series over the course of a generation. This is what worked so well with the Uncharted series and turned it into one of the finest video game franchises ever.

And that brings me to Watch Dogs. It is the biggest next-generation title to come my way since Titanfall debuted in March. I played Titanfall (which had also been delayed) until I reached top level 50 rank in the multiplayer-only title. And I haven’t set my hands on a AAA game since. Yes, I skipped Wolfenstein: The New Order, for lack of time and because my PlayStation 4 is out of order. That first-person shooter came out last week, and it got a so-so aggregated review Metacritic score of 78 out of 100.

When Watch Dogs fell out of the line-up last fall, everybody worried that the next-generation consoles had lost their flagship game that defined a brand new experience for hardcore gamers. Now it’s here. Ubisoft said launch sales were the best in history for a new Ubisoft game.

And I like it. Critics have given it an average of 82. (See our review). I’m not finished with it yet, but I like what I see. It has a compelling story in the tale of Aiden Pearce, a hacker who becomes a vengeful vigilante after powerful enemies attack his loved ones. Pearce penetrates the city of Chicago’s central operating system, ctOS, and uses it against his opponents in both the authorities and the criminal underworld. The story grabs me in the gut, and it goes on for a long time. It’s not as good as the story of The Last of Us, the top game from last year, but it’s had its moments. 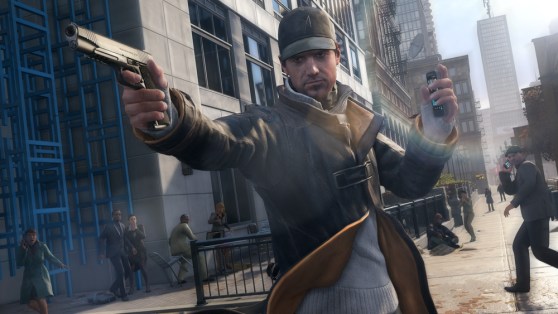 Above: Aiden Pearce, doing what he does best: Pointing a gun and holding his phone.

I’m quite a few hours into the experience and have completed just 15 percent of it. I’ve done 20 missions and I have about 21 to go, as far as I can tell. But I’ve already been able to crash a lot of cars. I’ve stolen at least $30,000 in cash by hacking the smartphones of innocent civilians as I walk past them. I have peered into the private conversations of scores of people by hijacking security cameras above them. I have seen labels attached to passersby as “heroin addict” or “casino gambler” because I have all of the ctOS data at my fingertips.

In high-speed chases, I have run over countless stop signs, telephone polls, street signals, and street lamps. And in what may be my greatest joy in the game, I have wrecked the cars of numerous criminals and police cars that were chasing me, mainly by hacking traffic signals or raising road blockers or raising draw bridges so that my pursuers crash their vehicles. I’ve staged an ambush that took down an army of well-armed gang members.

The experience is a lot like Grand Theft Auto V, which had a much larger open world. But Watch Dogs is fun because it is dense and populated. You have to sift through a crowd to find someone — another human player — who is hacking your smartphone.

When Pearce gets himself into really bad fixes, I have to bail him out. Like when he comes out of prison, where he has gunned down a bunch of guards, only to find himself surrounded by the police. I had to run and hide from a SWAT team, run and hide from a police helicopter, drive and hide from 10 chasing police cars, drive and hack traffic signals, until I could finally duck into a quiet corner, turn off the engine of my stolen car, and hide out until the police finally lost me. It’s funny that the simplest of solutions, hiding and turning off your engine, works better than shooting your way through a giant crowd of armed foes.

Not once have I had the game crash on me because I was doing something that broke the walls of the virtual world. I’m still early in the game and early in the story, but I am savoring my little power trip. I think that Ubisoft has paved the way for next-gen and given hardcore gamers a reason to play with their new consoles.

For my purposes, games have been arriving way too fast. I like the chance, once in a while, to slow down and savor them. To play them for a lot of hours and to get to the end of the story. And I feel like I’m getting all of this illegal stuff out of my system so that I don’t have to try it out in real life. I’m a big fan of Watch Dogs. I feel it meets the definition of a next-generation experience because it has kept me immersed, entertained, and coming back for more when I have many other choices in life.

There’s still plenty of good stuff coming this year, like Take-Two Interactive’s Evolve and Warner Bros. Interactive Entertainment’s Middle-earth: Shadow of Mordor. And I hope a lot more gets announced in the next couple of weeks. But in the meantime, I’m glad I’ll have a chance to spend some quality time with Watch Dogs. I would be quite happy to see E3 delayed a month or two before I have to get busy and move on to the next big thing.

And I admit that, deep down inside, I should be happy about these game delays. After all, when these delayed games come out, they’re more polished. And ready to play. That serves gamers. I just hope the audience for AAA games, challenged from all sides by digital games and free-to-play business models, doesn’t dry up in the meantime. 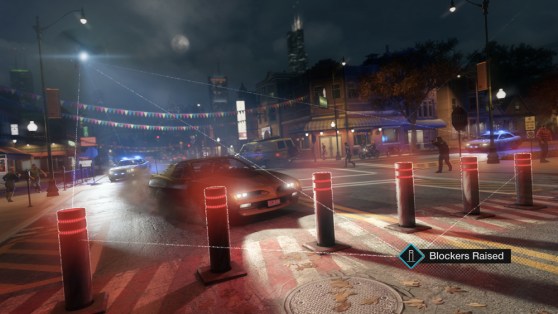