Axiom Verge isn’t the kind of game suited for a quick hands-on demo. Its surface elements — a Metroid-style 2D sidescroller with futuristic weapons — are fairly obvious from the get-go. But the rest of it, including its fascinating glitch mechanic, remains a mystery. Even after spending close to an hour with the game, I still can’t tell how deep it goes.

Developer Thomas Happ wouldn’t have it any other way. He started making Axiom Verge in 2010 while working full-time at Petroglyph Games. It wasn’t until Sony approached him earlier this year about its PlayStation Pub Fund — an initiative that provides financial support for independent developers in exchange for some exclusivity — that he was able to fully dedicate himself to finishing the game. He plans on releasing it for PlayStation 4 and PlayStation Vita either in late 2014 or early 2015.

“My philosophy behind it is not just trying to make a game that you can play through to completion and have fun but also exploring the idea that there is a world beyond the boundaries of your game,” Happ told GamesBeat. “It’s filtered through my childhood perspective of when I would encounter glitches in games, like secret worlds or secret areas, things you get with a Game Genie that you can’t get elsewhere. They make it feel as if the game goes beyond just the edge of the screen. When you’re a kid, you just think it’s a barrier that the grown-ups put in there. If you can only get past it, who knows what exciting things are there? A lot of this is inspired by that feeling.”

Axiom Verge takes its time building up to that point, however. In the beginning of the story, a scientist wakes up on an alien world after dying in a horrible lab accident. While it was interesting to see how the tale starts (your character hears voices in his head telling him what to do), it’s not an ideal way to see the rest of the features. So to get a better sense of how Axiom Verge changes over time, Happ brought me to a new level, one that’s not actually in the game. 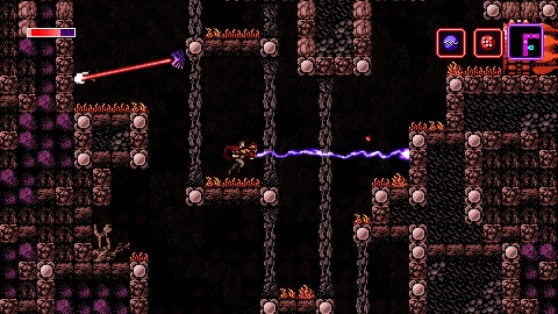 Above: The Lightning Gun is just one of 23 different weapons.

Peeking behind the curtain

Built within a week, this custom level is a condensed version of the full experience, a way of letting journalists at the press event collect advanced weapons and tools over a span of minutes rather than hours. This is where I found the Glitch Ray, which shoots out waves of energy that “glitch” its victims, transforming them into something else. Shooting it at a mass of pixelated squares, for example, turns them into stone, something that you can break through if you have a laser drill.

Aiming the Glitch Ray at the aliens is its own fun since you don’t quite know what will happen. My favorites were a trio of jellyfish-like creatures that transformed into harmless blocks of distorted pixels, along with vicious zombies who lost their leaping ability when they froze mid-air. Other enemies actually became even more dangerous, like the way one creature did when it started moving twice as fast after I shot it. Happ is still tweaking the gun’s effects and how it’ll work in the game, but he eventually wants each type of enemy to do something different when you glitch it.

Later on, I found the ability to slip through thin walls. On the D-pad, you have to double-tap the direction you want to go in (holding it down on the second press) to trigger it, and the screen will flicker and tear as you cross over to the other side. It was weird at first: I knew I was in control the entire time, but the visual effects help sell the idea that this is something that shouldn’t happen in the game. I almost felt a little guilty.

The secret areas only reinforced that feeling. I stumbled into one of these bonus levels by accident and was immediately struck by the thick, grainy filter placed over the screen — kind of like when you’re watching an old VHS tape. For the purpose of this demo, Happ put the area in just one place, but when Axiom Verge ships, an algorithm will decide where these levels end up in the world and what sort of items they’ll contain. The layouts and locations will change every time you start a new game. 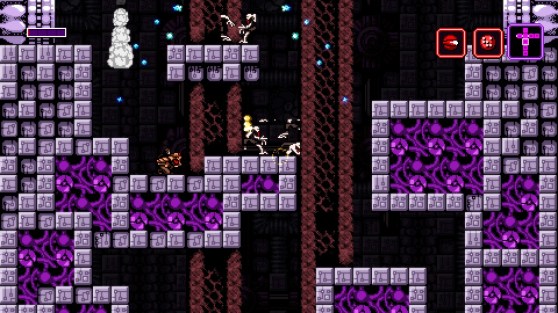 Above: Shooting the Glitch Ray at zombies kind of feels like you’re sending them to the Phantom Zone.

Toward the end of my session, I asked Happ if he found inspiration in real game glitches while creating his fake ones.

“To be honest, I go on to YouTube and Google ‘glitches’ and ‘dust on cartridge’ and ‘Game Genie effects,’ stuff like that. I watch a lot of videos and read a lot about other people’s experiences — I know that mine are limited,” said Happ. “I never played [the original Game Boy version of] Pokémon, so I never knew about the Missing No character. … That’s an important part of glitch history. There are a lot of things like that. If you play [the Nintendo Entertainment System games] Baseball or Tennis, pull out the cartridge, and then put in Super Mario Bros. afterward, you get something that’s kind of like the Minus World, but it’s like you’re swimming in the regular environment.”

With all this talk of game-breaking errors, it was only a matter of time before we found a real one: While passing through a wall, the scientist just disappeared, showing up a few seconds later when he magically teleported into the next room. I wasn’t sure if this was part of the game or not until Happ told me that he had seen this before and that it might lead to a crash. Ten minutes later, his prediction came true.

This would’ve been a headache for any developer showing off an early version of his game. But Happ didn’t seem to mind it too much. While others might see just another bug to squash, Happ saw it as an opportunity.

“If I can somehow get that to not end up in disastrous crashing, I would love to be able to use that for something,” he said. 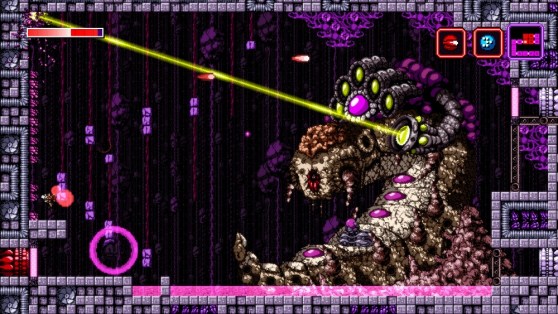 Above: It wouldn’t be a 2D sidescrolling adventure without towering boss fights.