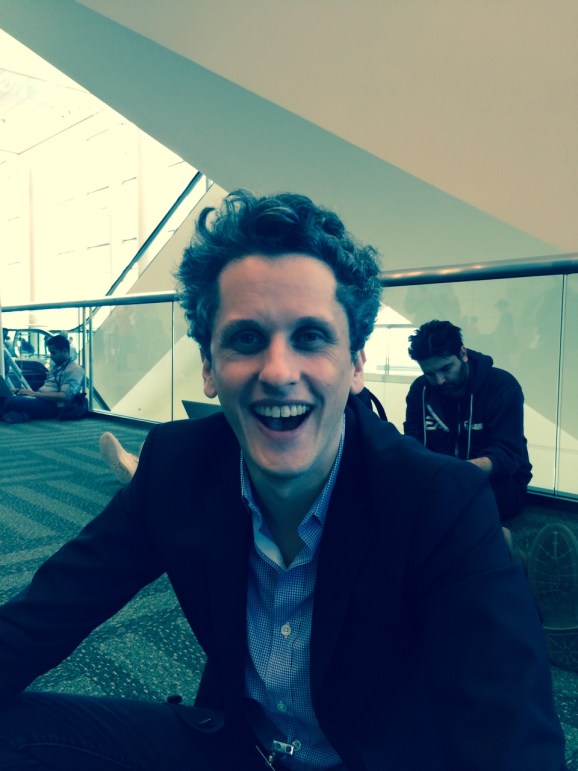 The ubiquitous Levie, with his mop of unruly hair, contrasted Microsoft’s offerings with Apple’s intensely hyped launch of new products, operating systems, and apps. Apple unveiled its cavalcade of features today at WWDC to a packed house of 6,000 guests — mostly developers — at the Moscone Center.

Among the announcements: Apple unveiled its new OS X Yosemite larded with new and intuitive features like a more translucent, iPhone-like look, an overhauled Apple Mail program, integration with iOS 8, and comprehensive updates to Safari and iCloud. Apple also announced encryption features in both its email and online file storage features.

Levie is a hardcore Apple fan. In fact, a predominant percentage of Box’s 25 million customers — and the 200,000 company’s using his secure cloud document sharing platform — are Apple hardware users, he says. His disdain for the Seattle technology behemoth was subtle but obvious.

He smiled knowingly, like somebody whose company will soon IPO. Box filed its S-1 paperwork with the SEC in March, a precursor to such a move. The company later delayed its IPO plans, but could go public as early as this month.

“All of our customers are using Apple devices to store, share, manage and access their content from anywhere. We think it’s a critical platform for our business,” Levie said.

For the friendly and intense Levie, Apple’s OS X Yosemite is a true game changer, a glaring and welcome contrast to Microsoft’s stultifying Windows OS.

“As somebody in this industry, we’ve got to a point of thinking that innovation in the operating system world is declining,” Levie said. “All of the new features and functionality you get in an OS, today changed all that.”

He’s right. Apple’s Yosemite has been supercharged. Caller ID on your MacBook and iPad is now standard. You can now make phonecalls from both devices. Siri’s presence is enhanced and nearly everywhere. Users can share files of up to 5 gigabytes free. And iCloud is now accessible on all Apple devices.

Sitting on the second floor of Moscone Center during an impromptu interview, Levie said that with the new Apple Extensions, apps can now “expose functionality” into other services. In other words, seamless sharing from one app to another.

For Levie, Apple Extensions means that users can you can move data between applications easily. Previous to this, a large gap existed within the mobile ecosystem. Now, instead of having each of your apps keeping data from one another via virtual “moats,” they can now share data more easily.

This is big news for Box. Documents taken from the Box platform can now be opened in a note-taking app or annotation tool, and work on that content can then be saved back to Box. Levie said as of now, this attribute is totally unique to the new iOS.

“This,” he said, “is going to be really powerful set of capabilities. And it’s going to give Apple a massive advantage.”

“If you think about Apple being in a war with Microsoft and Google, of who can build the better set of capabilities for developers, Apple just leapfrogged over everybody,” Levie said.