Don’t let the fancy scarf and the beefy echidna fool you: Sonic Boom is not a reboot.

While the newest entry (coming out exclusively for the Wii U and 3DS) in Sega’s decades-old franchise reimagines what Sonic and his pals — Knuckles, Tails, and Amy — look like, it’s just another part of the Sonic the Hedgehog universe. Western developer Big Red Button Entertainment is working closely with Sega and its Tokyo-based Sonic Team to make sure that Sonic Boom doesn’t stray too far from its historic roots.

“We really appreciated the feedback that Sonic Team was giving us, and it was really important to make sure that it was within the guardrails, basically, that they allowed us to experiment in,” Big Red Button creative director Bob Rafei told GamesBeat. “It took awhile to understand what those guardrails were. But there were some more extreme concepts, only in terms of just concepts, seeing how far we wanted to go with some variations. And Sonic Team reined us in, and ultimately, the designs that you see today are part of that collaborative process of going back and forth.” 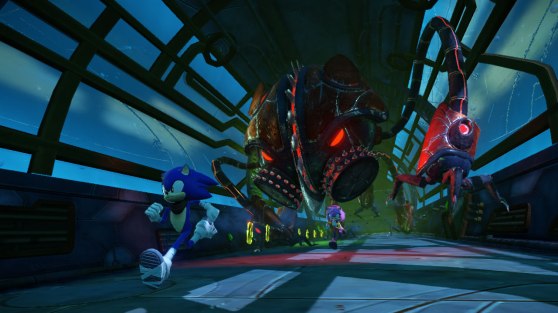 Above: If a giant machine was chasing you, you’d run, too.

Rafei couldn’t tell me what those extreme concepts looked like, but he did say that they “would not have been true to the Sonic DNA.”

“Part of the goal of the project was to build on characters’ personalities,” he said. “That was a visual exercise, hence the different design for Knuckles. And that was to make sure that viewers instantly recognize him as the power character. So if you gravitate toward that kind of gameplay, you’ll most likely want to play as Knuckles. Tails is the inventor and the gadget guy, so we wanted to give him a few accoutrements that gave you that impression. You’ll notice in his play style that he is a bit more distanced-based whereas Knuckles is the bruiser — he gets right into the action.

“Sonic is all about speed, obviously. … Amy’s all about agility and the hammer.” 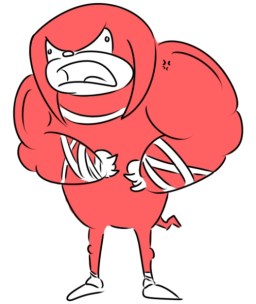 Above: That’s one angry Knuckles.

When Sega revealed the new character designs earlier this year, some people weren’t quite sure what to make of them. Artists mocked the new designs with hilarious drawings (pictured right), and a few of them took the ridiculous amount of sports tape Sonic and Knuckles are wearing and applied them to Nintendo characters. But if you look around, you’ll find others who seem genuinely excited about the game, too.

I asked Rafei what the studio’s reaction was to that overwhelming response.

“For me, it was very flattering. It was the highest form of compliment to have that kind of a fervor,” he said. “The majority of the feedback has been positive in terms of looking at fan feedback and general feedback. That to us is the highest form of validation that we are trying something that is different and pretty cool. … It was something that we anticipated. But again, I think that if we didn’t elicit that kind of response, I — and Big Red Button — would not be doing our job for Sega. I think if we were to simply create another canon-style game, then we’re missing the mark of trying something different.

“We’re not replacing canon. We’re not a reboot. We’re just a different branch. And that’ll happen with a property that has been around for so long. You see that a lot in the comic book industry, where there are alternate takes with a character. I think the video game industry is starting to see that now because of its heritage and history.”

Even though Sonic Boom is just Big Red Button’s interpretation of Sonic, Sega invested a lot of resources to make this particular branch succeed. In addition to the Sonic Boom 3DS game (made by Sanzaru Games) and a new toy line from Tomy, the publisher teamed up with OuiDo Productions to launch an animated Sonic Boom TV series that will air later this fall on Cartoon Network.