Homefront, the dystopian first-person shooter created by the now-defunct THQ and Kaos Studios, finally has a home. Originally published in 2011, it depicted a war in which the North Koreans conquered the U.S. But THQ went under, Crytek bought the rights to the property, and now Deep Silver will publish Crytek’s sequel, dubbed Homefront: The Revolution, which has finally been unveiled today.

Homefront: The Revolution takes place four years after the North Koreans conquered the U.S. in the original title. The U.S. opposition has gone underground as a guerrilla war movement in the divided districts of Philadelphia, the home of American freedom. The game will pit the American guerrillas against the heavily armed occupying forces. The story focuses on Ethan Brady, a lone character who tries to spark a new American Revolution.

We spoke with Fasahat Salim, a game designer at Crytek UK, in a recent interview at a Deep Silver event. Here’s an edited transcript of our talk.

GamesBeat: Did you work on the original Homefront, or did you come from Crytek?

Fasahat Salim: I’ve always been at Crytek. We began working on Homefront once we got the [intellectual property].

GamesBeat: Did much of that original team carry over, or did you essentially create a new team?

Salim: We were already Crytek UK. We didn’t have much to do with the original Homefront. Our team was already in place beforehand. 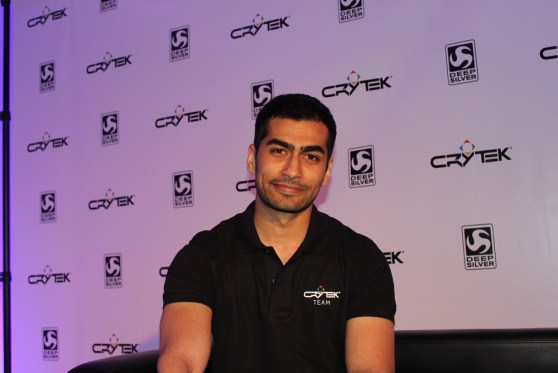 Above: Fasahat Salim of Crytek UK

GamesBeat: How did you approach taking over the franchise?

Salim: It was interesting. Obviously the franchise itself was done by a completely different team, but we all had a lot of interest in what Homefront was. It seemed like a game that resonated with a lot of players. That was something we were interested in. When we got the call to work on the next one, it was exciting. We tried to take the things we thought the first one did well and build upon that.

GamesBeat: Did you happen to be idle at the time, available to do a next big game? What had you rolled off of?

Salim: At the time — well, we’d just finished Crysis 3. We were moving on to our next project. This happened to come along and we moved on to that.

GamesBeat: What was the target for the level of graphics you wanted to achieve?

Salim: At Crytek, it’s no secret that we pride ourselves on visual quality. We knew we could push what we wanted to achieve with the CryEngine to a whole new level, on every platform. That’s what we’ve done with Homefront: Revolution and what we want to continue to do. 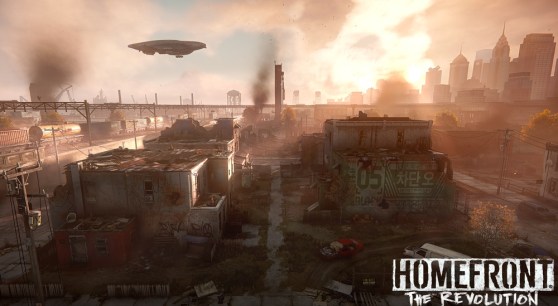 GamesBeat: What do you want to keep the same, and what did you want to maybe change in this new game?

Salim: One of the main pillars we wanted to focus on was the premise of guerrilla warfare. The first game had an amazing premise, but there was a huge opportunity to focus on something new. We took that guerrilla warfare pillar and built on it. We wanted to go open world with it and see how far we could take this. It’s now an open, evolving world. It’s a lot more expansive than what people are used to with Homefront.

GamesBeat: The story is set four years later? And during that time, they’ve assumed complete control.

Salim: Yes. This is a mature occupation. The KPA are pretty much in total control of the United States at this point.

GamesBeat: Did the original game sort of stop short in some way because technology just wasn’t as advanced back then? Did it leave you wanting something more in particular?

Salim: Judging from the responses from players, everyone seemed to find something that resonated with them about Homefront. But there were certain things that they felt didn’t quite push it to the level they were hoping for. We’ve tried to take all the best things, like I mentioned, from what the first Homefront offered and build on them as best we can.

GamesBeat: This demo did seem like it was running a little slow. We saw some framerate issues.

Salim: Like I say, it’s still a work in progress. This is just a sneak preview of what we’re hoping to head for at [the Electronic Entertainment Expo]. We’re aiming to hit 30 frames per second. There’s a lot of stuff going on under the hood. We’ve got an emergent A.I. system. We’ve got dynamic rain and time of day stuff. Thirty frames per second is probably the top we can hit with this, and that’s what we’re aiming to do. 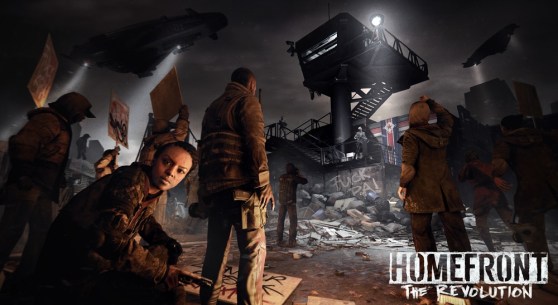 GamesBeat: Would you say it’s more advanced than Crysis 3 in some ways?

Salim: Yeah, I’d say so. The thing is, this is an open-world game. We’re trying to push the CryEngine tech and take it to an open world. The scale of things in this game is a lot bigger than what we’ve seen in Crysis.

GamesBeat: If you had a level in this game and level in Crysis 3, would this game’s level be much larger?

Salim: We have various districts in Philadelphia, is what we call them. Each of these districts has its own tone, its own feel. Each of them comes together to create this open world. As you play through the game, you’ll unlock more districts and experience a bigger world.

GamesBeat: Is it a recognizable landscape? At this level, can you essentially re-create environments and neighborhoods?

Salim: Yeah, if you’re familiar with Philadelphia, you’ll definitely see landmarks. We’ve tried to re-create it as honestly as we can, keep it as true to the real thing as possible. But, obviously, with this dystopian open world feel to it, taking gameplay and all the other things we have to consider in a game like this into account. I’m pretty confident that we stayed as true to it as we possibly could.

GamesBeat: We saw the R/C car and the bomb under it. Was that part scripted, where the car drives there?

Salim: For this demo, we could only show one playthrough. The idea is that every scenario you come across in this open world, you can attack it from various angles. It comes down to what you have at your disposal at the time. The R/C car was just one way of doing it. If you didn’t have an R/C car at that point, you could have found another way of doing it. You could have stayed back, maybe used the sniper rifle or something. It comes down to how the player wants to tackle something, how they’re comfortable with it, and what kind of equipment they have.

Because we have an emergent A.I. system, the whole dynamic of the game is to approach it however you want. If you went in and things weren’t quite going the way you planned, you can always retreat, go away, and plan things and get things that you feel would help you in a better way. When you come back, you can always approach it in a different way. There’s no reason you shouldn’t be able to do it how you want. 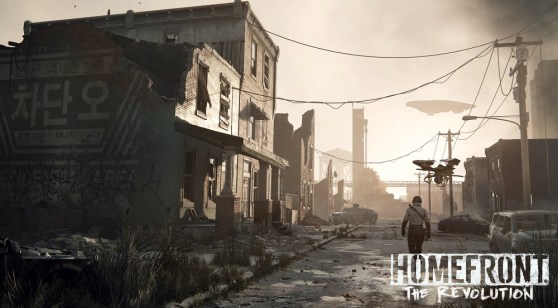 GamesBeat: Can you talk about the main character?

Salim: In Homefront: Revolution, you play as Ethan Brady. He’s just an average, everyday guy. You have to take him on a journey from being an oppressed U.S. citizen to basically starting a revolution. We’ve got quite a strong narrative going on in this. But he’s a brand-new character, not connected to the previous game.

GamesBeat: Do you feel like it’s a sort of Grand Theft Auto-sized city? Or is it something a little more compact or dense in some ways?

Salim: The whole of Philadelphia is broken down into different districts, like I said. Each district has its own feel and its own size. The KPA have moved most of the population into each of these zones, kind of like ghettoes, so it’s easier to control and manage the population. The area will feel quite compact and filled up, but there’s plenty of space for you to roam around. There’s quite a bit for the player to explore.

We’ve built this dystopian world off the fiction that already existed. We’ve tried to stay true to what the Homefront franchise was designed to achieve. But this is Crytek’s vision of a dystopian Philadelphia. 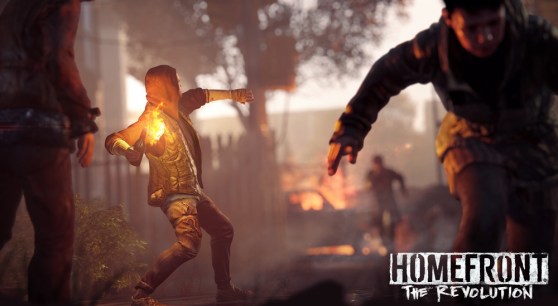