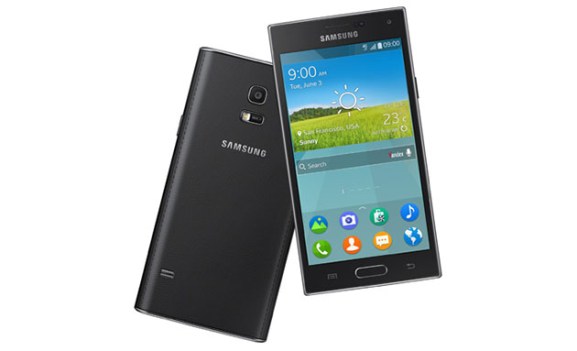 After a long wait, Samsung has finally debuted the first smartphone to run its homegrown Tizen operating system: the Samsung Z.

Even though Samsung is the king of Android phones, the company has been hard at work on Tizen over the past few years, a Linux-based open source operating system that would give Samsung a platform completely free of Google’s control. The seeds of this move started earlier this year when we saw the company move its smartwatch line away from Android to Tizen — indeed, the smartwatch may be the form factor Samsung is most interested in targeting with its new OS.

The Samsung Z is more of a proof of concept for developers than a phone meant to appeal to typical consumers. It’s powered by Tizen 2.2.1, but it doesn’t yet have any major app support from third-party developers. Samsung will be showing off the phone at its Tizen developer conference in San Francisco later this week, in a bid to court support.

The Samsung Z sports mid-range specs — a 720p 4.8-inch screen, an 8 megapixel camera — alongside a powerful 2.3 gigahertz quad-core Qualcomm processor. But this isn’t a phone that you’d be buying based on specs. It’s meant to serve as a way to introduce the world to Tizen.

Samsung hasn’t done much to explain what Tizen offers over Android. It describes the phone as “fast” and “efficient,” but it actually represents more of a philosophical shift for Samsung than a practical one.

What sort of phone platform could Samsung make if it wasn’t beholden to Google? With the Samsung Z, the company is basically entertaining that alternate reality.

The Samsung Z will be available in Russia in the third quarter and will eventually head to other markets. Don’t expect it in the U.S. anytime soon.

You can get an idea of what Tizen will look like on the Samsung Z in a hands-on look at a Tizen prototype phone below.