War Thunder is primed to make its move.

On June 3, indie developer/publisher Gaijin Entertainment will attempt to slay rival Wargaming’s two-headed World War II gaming dragon (World of Warplanes, World of Tanks) by releasing a free-to-play PlayStation 4 version of its own World War II vehicle battler: War Thunder. This PS4 version is a cross-platform port, which means that PC and PS4 aces will battle in one large community.

It’s a gamble. War Thunder is counting on an influx of new blood (and money) from PS4 players to keep up with its major competitor, which is developing a third title, World of Battleships.

I took a look at War Thunder for the PS4 and compared it to World of Warplanes/Tanks. The titles are similar, but War Thunder has several distinct features that I found made it more appealing than Wargaming’s efforts.

Tank combat rewards pinpoint aim, not a manipulation of physics

War Thunder gives players the choice between tank or plane battles. The two modes play out in different ways. Aerial battles are quick and chaotic while tank battles are slow and methodical.

Players who choose ground warfare will enjoy War Thunder’s sophisticated targeting system. The sight on your tank will change colors based on what you are looking at: white for nothing, red for a heavily armored section of an enemy, yellow for a lightly protected section, and green for a critical spot.

The basis for combat focuses on tank anatomy. A shot to the meaty armor will do nothing while a blast directly into the driver’s hatch will destroy the tank in one hit. When I first started playing, this was infuriating. I would spend 20 seconds rolling to the battlefield, get shot twice, explode, and repeat the process.

Eventually, I grew to love the color-coded system. If someone pulls off an insanely good [or insanely lucky] shot, it should be a one-hit kill. Once I learned to place myself out of harm’s way, the tank mode of War Thunder became about positioning, short maneuvers, and great aim.

War Thunder’s combat also chooses to obey the laws of physics, which can’t always be said of its competitor.

Take a look at this World of Tanks video of me getting shot through a hill [twice] then firing a panic-round into the ground that hits the enemy:

This type of thing does happen in War Thunder, too, but it seems to happen a whole lot less than it does in World of Tanks.

I prefer the fighter plane aspect of this growing WWII vehicle-simulation genre.

I spent my first few hours trying to weave through trees, mountains, and desert cliffs on some pretty decent maps. My joyrides led to the discovery of some neat little features that help distinguish War Thunder from other dogfighters.

If I flew around inverted or maneuvered the plane in a dangerous way, a G counter would light up, and my screen would go black. My pilot was passing out from the intense forces I had just put him through.

I couldn’t get my guns to work, either. They would jam up at different intervals and take forever to reload. I would fire at the little gray dot to lead my target and still miss 95 percent of the time.

And don’t get me started on my maneuverability. Most of my strafing runs turned into inadvertent kamikaze missions.

Then I discovered this screen: 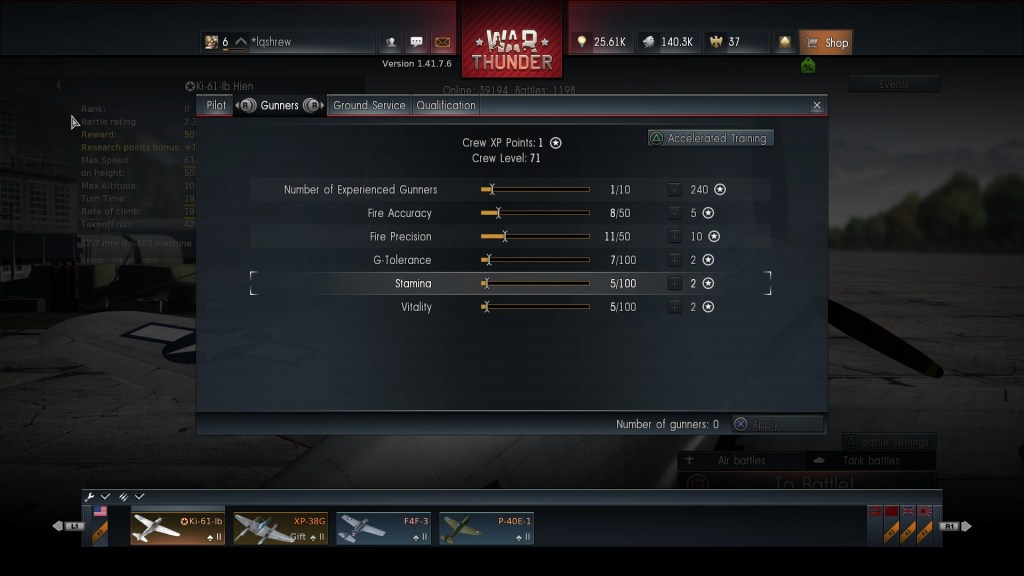 Above: Pilot/Gunner progression in War Thunder.

It turns out everything sucked for a reason. Training helps pilots black out less often. Gunners need to learn how to hit their targets. I spent all of my points and noticed a marked improvement. War Thunder’s system provides for pinpoint specialization. I could just throw all of my skills into great gunners if I wanted. So this offers a strategic aspect here that isn’t present in the vague progression available in World of Warplanes. 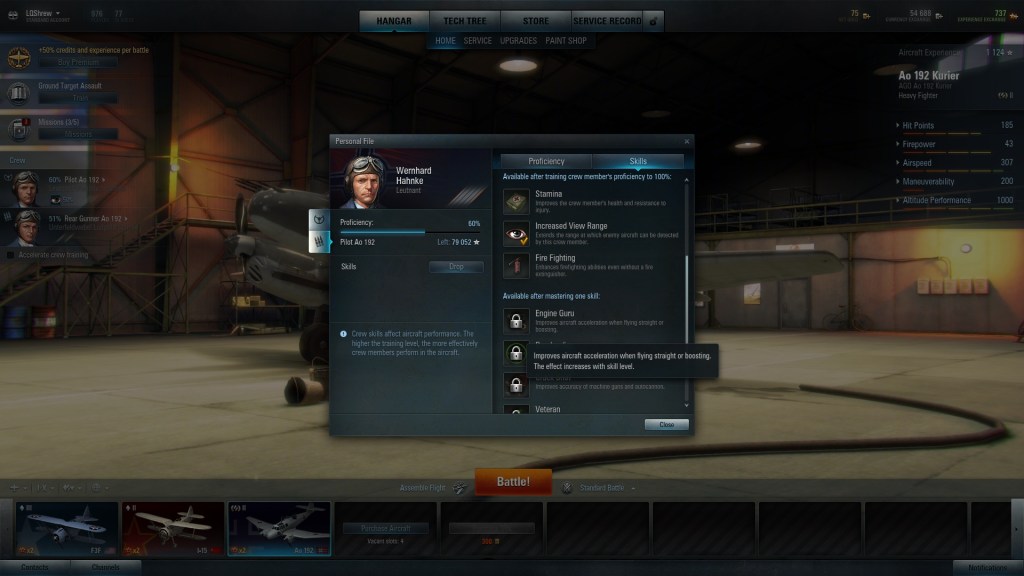 Above: Pilot progression in World of Warplanes.

My guns still jam at random intervals, but I like that. This is a World War II game, after all; machinery should be unruly.

Realistic Battles removes the training wheels and thrusts the player into a real-life combat mission. Everything that an actual WWII pilot had to worry about, like takeoff, fuel, ammunition, and landings, is now your responsibility. Failure to monitor these variables will lead to a swift return to the main menu. Players have one life in Realistic Battles mode.

Each team in War Thunder starts out with a full score meter that decays as the enemy team secures objectives and gets kills. One particular Realistic Battles map has an ingenious set of objectives that could shake up the entire genre. The map allows players to land on one of three neutral landing strips in order to capture it for their side. The enemy’s total score drops for as long as you hold the strip. Other players can still lower the opposing team’s score by destroying each other.

It is an absolute win-win. Those that just want the Player vs. Player action are free to pursue it, and players that are looking for objective-based play get a chance to pull off something different and challenging.

And trust me, it is challenging:

The only problem is that War Thunder isn’t using this odd landing mechanic to its full potential. In my first 50 Realistic Battles, I only got to play this map once. I got in and crashed, and I never saw the beautiful map again. That’s why I can’t remember the map’s name.

I would really like to see War Thunder add this capture-the-point-by-landing-on-it mechanic to all of its Realistic Battles maps.