Imangi Studios has had a rare hit in Temple Run, whose various versions have now reached more than a billion downloads on mobile devices. That’s a stunning achievement for a game that is not quite three years old. And it’s all the more remarkable that it was created by a three-person team: husband and wife Keith Shepherd and Natalia Luckyanova and artist Kiril Tchangov.

Temple Run started the “endless runner” genre, where you swipe your mobile device’s screen to make a running character move and evade pursuing demonic monkeys or other baddies. Players have been tremendously loyal, playing for a total of 216,018 combined years. And 60 percent of them are women. All told, 50 trillion meters have been run.

Shepherd recently talked with us about Imangi’s great fortune and his own thoughts about how to stay true to the indie developer roots of the company. Now with 11 employees, Imangi is still feeding new content to Temple Run fans, and it’s still figuring out other types of games to make as well. Here’s an edited transcript of our interview with Shepherd. 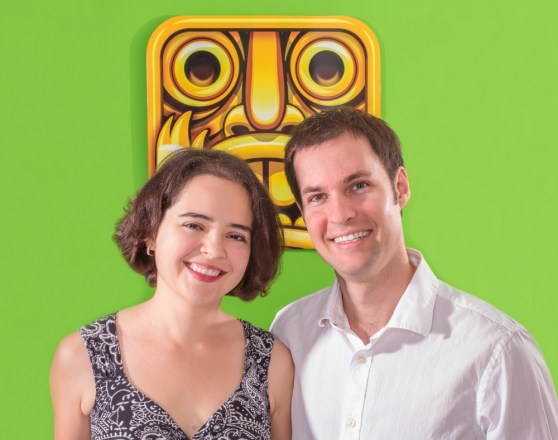 Above: Natalia Luckyanova and Keith Shepherd of Imangi Studios, creators of Temple Run.

GamesBeat: Can you bring me up to date? How big is Temple Run now?

Keith Shepherd: Obviously we’re announcing this milestone of a billion downloads for Temple Run across our franchise. It snuck up on us a bit. When we saw that it crossed that number of downloads, it was a good opportunity for us to reflect on how we got here and thinkabout where we’re going from here. We used the opportunity to gather some stats. We did an infographic a couple of years ago, for the one-year anniversary of Temple Run, and we thought it would be fun to follow up with another, some updated stats and things to share there.

It’s kind of crazy. Temple Run has been out a little over three years. We launched on August 3, 2011, I think? At the time, there were just two of us at the company. We were working with a freelance artist on the game. The three of us made the original Temple Run in about five months. We had no idea that it was going to become this huge hit and worldwide phenomenon and get a billion downloads. We were just a small team that loved to make games, working out of the bedroom in our apartment and doing what we loved. We’d been doing it a while — I think it was the tenth game that we released on the App Store — and it really blew up.

It’s changed so many things for us. It’s opened up cool opportunities. Over the past three years, we’ve spent a lot of effort on Temple Run. We created a sequel. We worked with Disney twice, doing Temple Run Brave and Temple Run Oz. We started this worldwide licensing and merchandise program. We have arcade machines and apparel and plush toys and board games. It’s been an amazing ride.

As we’ve been going along with this adventure, we’ve in the past year gotten to a point where we started to think about the future. We’re a tiny team. We have this huge success under our belt. What do we do next? One of the reasons we got into this industry was because we had a huge passion for games. We wanted to make games and explore new ideas. It was starting to feel like we were missing that from our day-to-day lives at Imangi. We had spent the past two years working on Temple Run at that point, doing updates and sequels and all that stuff, and we were itching to get back to making new games.

At the same time, we thought to ourselves, “What are our options? Do we stop working on Temple Run and the regular updates? Do we focus on doing something new?” We’re a small team. We don’t really have the bandwidth to do both. Or do we consider growing our team a bit?

That brings us to today. We decided we wanted to keep working on Temple Run and keep our fans engaged and keep doing more with that IP and continue to build Temple Run into a franchise that’ll be around for the long term. At the same time, we wanted to bring some of that new game development back into our lives.

We opened up a studio and started hiring people about a year ago. We moved into our new office in January. These days we’re 11 people, still a really tiny team. But we’ve gotten to the point where we can continue doing these regular updates to Temple Run and building on that franchise. At the same time, we’ve gotten back to our roots and started prototyping a lot of new game ideas. We’re starting to focus on creating what’s next. It’s really exciting.

We’re at a fun point in our studio’s life. We’re in the fortunate position of having such a huge success in Temple Run and the stability that brings to our company, but at the same time, we’re still grounded in the experience of wanting to be really creative and innovative and prototyping and messing around with what will ultimately become our next great product as well. It’s a cool time here at Imangi. 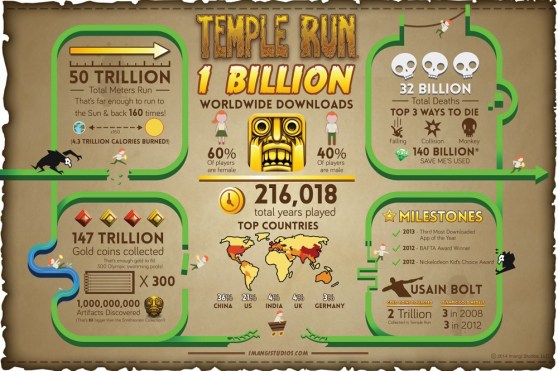 GamesBeat: Did you feel like you were more indie developers at heart? Did you want to stay indie in some way?

Shepherd: Absolutely. We bootstrapped this company. We don’t have any investors or folks backing us. We always identified, and still do identify, with the indie spirit and the indie movement. We want to maintain that.

We could go so many directions with the success we’ve had. We could have tried to grow the team into 150 people and do all sorts of things and eventually try to sell the company for a zillion dollars. But that’s never been our goal. We’re just a group of people who are passionate about making games. Whether we’re starving or we’ve gotten rich, we still want to do the same thing. It’s a lot of fun making games. We love to be a part of that.

That’s what the indie spirit is about. Not everything is driven by the bottom line. We’re focused more on the creative aspects of what we’re doing. There’s a huge sense of community, too, that goes along with being indie. We’re very active in that community and supportive of that community. We interact a lot with our other friends who are indie developers. Some of them have been very successful and others haven’t been as successful, but we share a lot of information and strategy. We talk about our successes and our failures with each other. We also help each other out. If someone launches a new game, we all rally and help cross-promote and cross-market it. That hasn’t changed for us, with our without the success of Temple Run. Now we just have a bigger megaphone to help our friends out when we cross-promote things.

I very much identify with that. As we grow the team and start to turn from this mom-and-pop company into a legitimate small studio with actual office space and employees, that’s something I want to hold on to and not lose sight of, our focus on that indie feeling.

That’s also one of the reasons we’ve chosen not to just grow explosively. It’s something I want to get right. I want to grow at the right pace, so we don’t lose sight of what we started this company for.

GamesBeat: How many people are there now working with you?

Shepherd: We’re 11 people, counting Natalia and I. We have a couple of open positions. We’ll probably grow a bit slowly over the next year or two. We’re still in Raleigh, North Carolina.

GamesBeat: Do you consider that to be one team, or are you able to divide that effort now?

Shepherd: The way we have things structured, we’re all part of one team. We split our time between doing things for the Temple Run franchise, and then also, as a team, working on the new and creative and next-step prototypes. We do a lot of team prototyping activities and internal game jams, where we’re focused on coming together and rallying to come up with new great ideas. At the same time, we all chip in and work on supporting Temple Run. That’s the thing that funds the studio and everything we’re working on. We don’t want to find ourselves in a situation where half the team is focused on Temple Run and the other half is focused on these new things. I feel like we all chip in a little bit here and there on all of these things.