People from Apple and Samsung have been talking about how individual wearable products like FitBit report the data they collect into individual repositories, so that someone or something can’t analyze that data or combine it with other types of data. That’s bad, they say.

Apple, Samsung, and others are trying to build large tech platforms into which all sorts of health and fitness wearables can connect and send data.

Intel CEO Brian Krzanich made wearable devices a priority when he took the helm a couple of years ago. But Intel looks at the platform approach that Apple and Samsung espouse with skepticism. Maybe there’s some sense in leaving wearables data in “silos” after all. 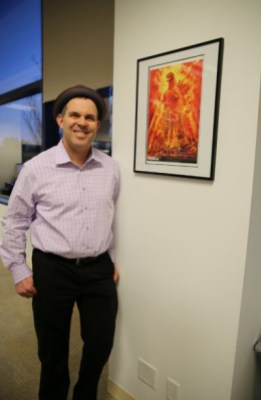 I asked the VP of Intel’s New Devices group, Steven Holmes, what he thought about Apple’s new HealthKit platform and Samsung’s new SAMI platform, both designed to act as repositories for health data collected by wearables.

“It’s exciting, and it’ll be interesting to see where it goes,” Holmes told me. “But I think the real acid test for these things is who owns my data. If it’s my data can I export it any time I want and take somewhere else, or are these companies going to keep the data for themselves and use it?”

The common thinking is that if there is money to be made from a platform, it’s probably in analyzing and packaging the data that’s collected there. “I don’t know that anybody’s exactly sorted the final right answer, but these things are rarely charitable undertakings,” Holmes said.

Part of mobile’s storied history is Intel’s slow start in getting its chips into phones. While Intel fumbled around and made some strategic missteps, Qualcomm dominated the mobile chip market.

Intel doesn’t want that to happen in wearables. So why would a wearable maker choose an Intel chip instead of one made by ARM or Qualcomm?

“Well, first of all the latest version of our mobile chip set will stand up to any other chip on the market,” Holmes said. “But there are other things besides the chip. For instance we provide a lot of things around integration and backend services.”

Holmes says Intel can help wearable device makers build their own data repositories based on Intel software. “Our data services group can help them build out a data center and run analytics to make the data meaningful.”

This, after all, is Intel’s strong suit: It dominates the market for data-center chips and software. Holmes points out that Intel is the fifth largest software maker in the world.

Today, the wearables market is still young and trying to find itself. Many people believe the buzz around wearables comes from companies that make wearables, not by consumers. But if the acceptance curve does eventually soar upward, Intel wants to be there with the chips and the backend services.

Holmes and his team designed a bunch of gadgets, including some wearables, that CEO Krzanich showed off during his CES keynote in January. These products included a watch with heath sensors built in, and a set of earphones that detect the wearer’s heartbeat.

Many of the devices were powered by a new Intel microcomputer (or “system on a chip”) called Edison that was designed specifically for wearables. At the CodeCon conference last week, Krzanich demo’d a new Edison-powered shirt made with conductive fibers that can track your heart rate and push the data to a smartphone.