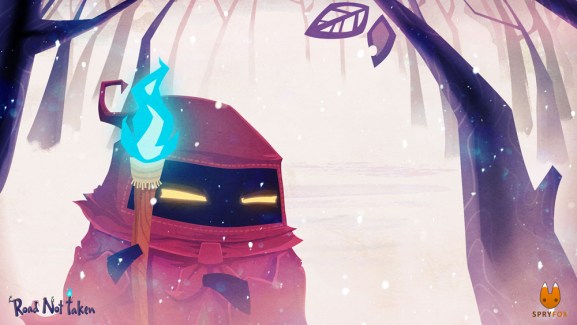 Spry Fox's next adventure is puzzling in the best ways.

Road Not Taken is a hell of a game to sum up in one snappy introduction. Even now, a week removed from the two hours I spent unwrapping layer after layer, I’m not sure I could justifiably say it fits neatly into the outdated genres by which we still categorize. But that’s OK, you see, because as I learned while speaking to Daniel Cook and David Edery — cofounders of independent development outfit Spry Fox — they don’t particularly know who the game’s for and it doesn’t bother them at all.

“I really don’t know who the demographic would be,” Daniel Cook said when asked who they’re targeting with Road Not Taken. Cook, in addition to cofounding Spry Fox, serves as its creative director and designer on most games the Seattle-based studio churns out. The studio is quickly building a résumé full of indie hits the likes of Triple Town, Steam Birds, and Realm of the Mad God. His efforts on their most recent offering include design and writing, drawing from deeply personal elements and hardships of his own life to fuel an experience that not only resonates with players but also affords him the chance to get it all out in the open.

“It’s definitely us,” David Edery jumped in. As CEO of the dozen-person development house, Edery shares the other half of the co-founder moniker. “People who like hard puzzles, that’s for sure.” He’s not wrong: Road Not Taken forced me to stop and consider on a number of occasions. When I started to get comfortable — confident in my abilities to find the reward at the end of the maze, Road Not Taken added a new mechanic. This happened half a dozen times by the end of the first level — an indication of the sheer depth and variety waiting further along. 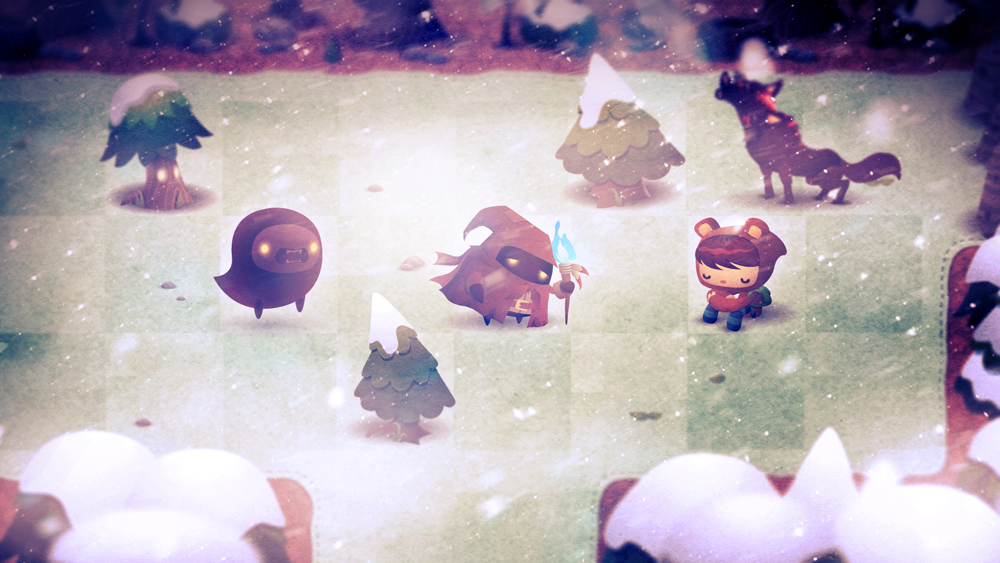 When I asked Cook to give me the Road Not Taken elevator pitch – the bare essentials of the game in as few words as possible — his description was in itself a puzzling thing. “It’s an open-world puzzle roguelike based off a poem by Robert Frost,” he said with a smile, fully aware of how it sounds when said aloud. But that’s exactly what Road Not Taken is. A puzzle game populated almost entirely by procedurally generated rooms where you pick up objects in every direction around your character all at once and fling them into related objects. If you’re good, you’ll complete objectives and fulfill a haunting, fairytale narrative about life, death, love, hard choices, and making the best of the hand you’re dealt. If you’re bad, you’ll die immediately.

You begin Road Not Taken washed up on the shores of a village. As the newest member of the tiny society, you’re quickly tasked with earning your keep by setting out into the surrounding woods and rescuing lost children – but there’s a catch. Each successful foray in to the wild costs you one year of your life, and after 15 years, you will die. “Because it’s a roguelike, most players will not make it all the way through 15 years without dying,” Cook said of the system. “But you’ve got 15 years to build relationships that you want, to try to get your life as best as possible.”

This idea of living the best possible life stems directly from the game’s namesake, “The Road Not Taken,” one of the more famous works by American poet Robert Frost. “One interpretation tends to be like: sometimes you have to pick a path in life and live with it. And then looking back on it you ironically congratulate yourself on picking the best path possible,” Cook explains. “But there’s also this like standard narrative of how you should live your life. This idea of: You go to school, you get a good job, fall in love, get married, and then have kids. That’s the arc of life and everyone should follow it. But life usually doesn’t work out that way. Not for everybody. And as you’ll go through you’ll start to see these multiple layers and we start bringing in that theme again and again. How do you live the best possible life in the time that you have and what decisions do you make?”

It’s a question that doesn’t have a clean answer. In Road Not Taken, adapting to unexpected pitfalls and staying alive to save another child is the best and only reward. That emphasis on lost children is a personal one for Cook, who in part sees Road Not Taken as a chance to exercise his own unexpected detours on life’s path. “My wife and I, we can’t have kids, so that’s some of the origin of this,” he admits. “I don’t know, I think of the game as therapy for me, personally. If anyone else gets something out of it, great, but it’s a way of sort of putting it out there, outside of me as opposed to inside.” 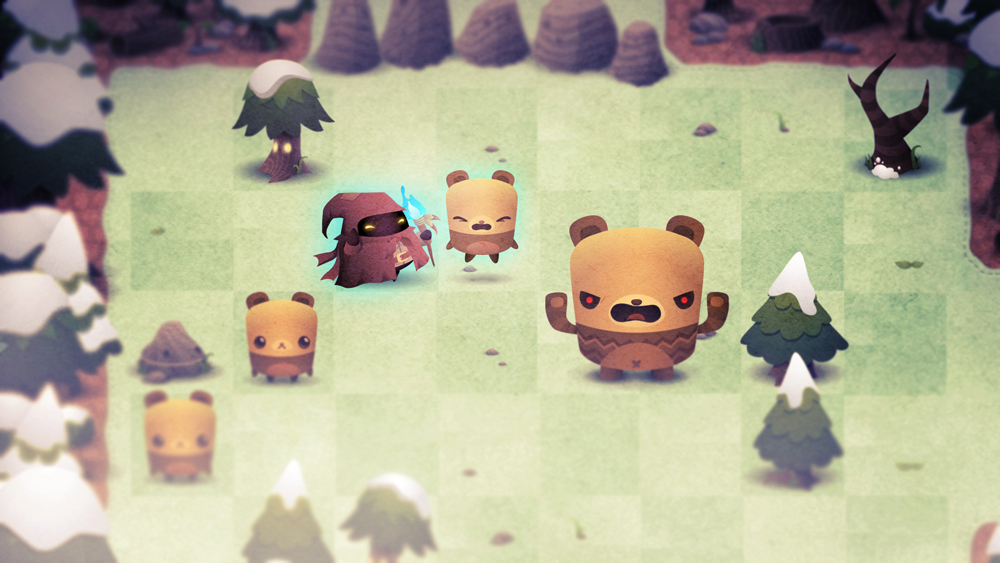 Above: Spry Fox tips the hat to its history with little references to past games.

At its core, decision-making is what Road Not Taken is all about. Your character’s energy depletes when carrying objects and interacting with the many monsters that roam the forest. That energy is also your only life source, and once you exhaust it, you’re dead. This forces efficiency in your movements and choices while making decisions that not only accomplish immediate tasks but benefit the future. It’s something that becomes almost second nature the more you play Road Not Taken — a fact I became aware of watching Edery whip through puzzles and missions with trained precision.

When completing a level and moving into the next year of life, unspent energy carries over to the next year. “The really excellent players, you’ll see them keep getting better and better at the early levels because it helps them later on,” Cook says. “It’s your reward for being efficient.”

Those rewards and the knowledge earned through repeated plays are necessary in the most frantic and challenging portions of Road Not Taken. “We have unique creatures that are sort of traditional bosses,” Edery says of the witch attempting to feed children to her cauldron, inspired by the Slavic folktale of Baba Yaga. “Most the game is about solving puzzles, and even the bosses, you beat them by solving a puzzle.” These moments are chaotic as the time to consider movement is stripped away, and a dozen actions unfold at once.

“Aw, she got that one,” Edery laments as a child vanishes into the pot. “And the house kicked me, because the house is — no! Oh, good — the apple got in the way. And I’m going to save this one!” I’m not ashamed to admit I was barely able to grasp everything happening onscreen. Watching Edery confront the witch, it was like another language was being spoken, a language learned through hundreds of hours spent with the innumerable combinations of puzzles that could be generated in any playthrough. 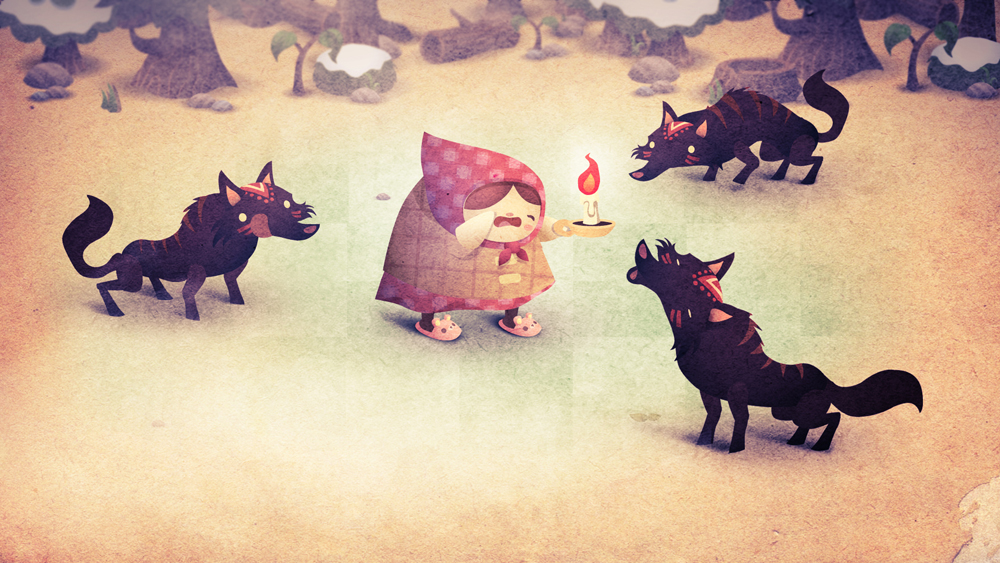 Above: The woods are dark and full of terror.

It takes a village

But just like life, you can find help if you know where to look. “Most of the things that are bad in the game, if you know a trick, can be turned into something that’s actually not that bad,” Edery says. In fact every mechanic feels like a commentary on life if you dig deep enough, and those little tricks that come with experience can be learned by paying attention and forging relationships.

Each randomly generated townsfolk comes with their own quirks and secrets. Courting members of the village with resources earned during puzzle trips in the wild can modify your experience, but can also come with unexpected hardships. “We keep saying we want the relationships [in the game] to be like relationships that happen in real life,” Edery explains. “No relationship is perfect.” And indeed, like real life, sometimes you fall out of love, sometimes your other half gets sick, and as heart-breaking as it may be, sometimes people die. Road Not Taken, like life itself, is unpredictable.

Objects that modify the way you play the game further customize a player’s experience. For example, a large coffee cup grants an immense amount of energy, but it causes all your actions to also cost more energy. Similarly, magical trousers allow you to lift otherwise immovable objects, and in doing so causes aches and pains to chip away at your resolve. “David really likes having the extra parents and the extra energy,” Cook says. “And I tend to use the trousers a lot. Everyone has their favorite setup.” These objects are above and beyond the seemingly endless variation of Road Not Taken’s crafting system, which allows you to build tools and modify the environment for better efficiency. 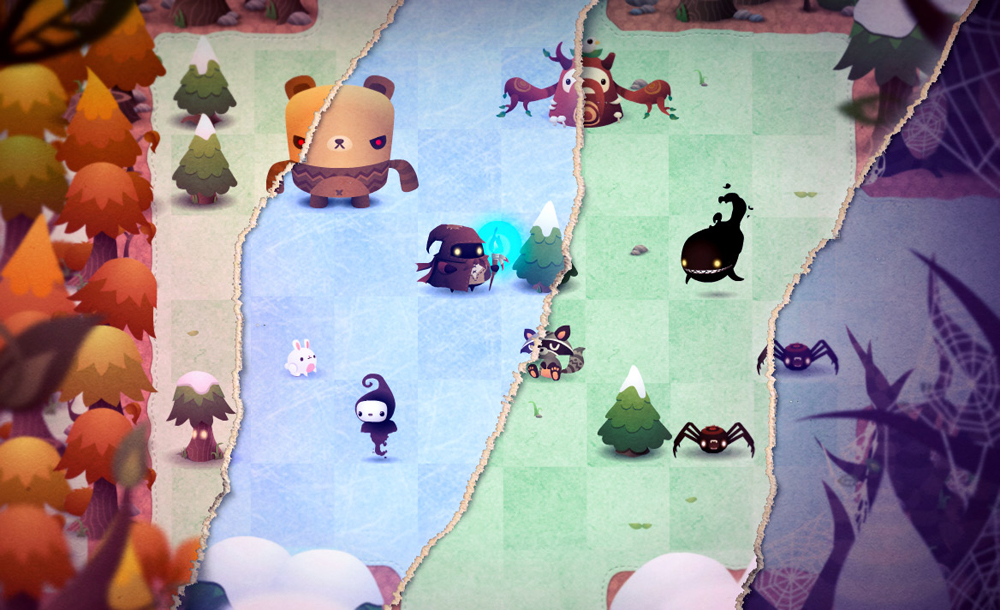 Above: With age comes the changing of the seasons.

Both men have hopes for Road Not Taken. “If it changes how someone looks at the world, that’s great,” Cook says. “If it brings people together, we’re really interested in bringing people together.”

Edery hopes players will see just how much Road Not Taken has to offer. “Our biggest fear when we first started showing people this game was that they were just going to be like, ‘Oh, it’s just another puzzle game,’ and they wouldn’t understand how much depth there is. There are two years of development that have gone into making this a game that you can play for 100 hours.”

From everything I’ve seen and played of Road Not Taken, combining its many varied pieces does indeed offer something with the potential for dozens of hours of new discovery. It’s unsettling at times, like when a mother remarks “I blame myself” in reference to her lost child. It’s also beautiful and cerebral all at once. Road Not Taken is by no means just another puzzle game. My time in the pseudo fairy tale left me thinking of it as a truly unique experience that is many times greater than the sum of its parts. You’ll have a chance to draw your own impressions when Road Not Taken arrives later this summer on PlayStation 4 and PC.